Most people think of wasps as fairly sizeable, menacing social insects that sting. Nothing could be farther from the truth. The overwhelming majority of wasps are solitary, tiny, and stingless. Collectively, these little creatures are known as “micro-Hymenoptera.” They are chiefly parasites, hyperparasites (parasites of parasites), or parasitoids (parasites that invariably kill their host). I had the good fortune to come across one such wasp recently, when I spied a 2-3 millimeter wasp on a string of eggs laid by a giant mesquite bug, Thasus neocalifornicus. This started quite a sleuthing exercise. 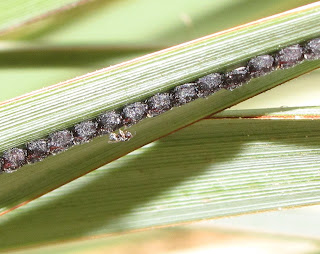 While I recognized the wasp as some sort of egg parasite, I had to narrow the list of suspects down to one of several possible families. My first step was to contact both the Entomo-l listserv and my friend Eric Grissell, an authority on micro-Hymenoptera. Entomo-l is an international e-mail list of professional entomologists, and I was pleased and grateful to get several responses, none of which agreed with one another! One respondent urged me to link to an image, and they did so on Talk Like a Pirate Day, which made for an amusing exchange.

While the dimensions of the wasp stretched the boundaries of my camera’s capabilities (I shoot with a Canon PowerShot SX10 IS), I did link the resulting image in my next post to the listserv, and Dr. Grissell, and this narrowed the focus to two families: Encyrtidae and Eurytomidae, both of which include egg parasites. Eric even suggested a potential genus: Neorileya. He also copied his response to me to another expert, Dr. Michael Gates at the Systematic Entomology Laboratory, Agricultural Research Service, United States Department of Agriculture.

Dr. Gates agreed with Eric and even suggested a possible species: Neorileya ashmeadi. I may try and collect some of the eggs to try and rear out the wasps for specimens I can send him for verification.

According to Gates’ revision of the subfamily Rileyinae (family is Eurytomidae if you recall), the genus Neorileya includes six species that collectively range from central California to Argentina. They are known to be endoparasitoids of the eggs of not only Coreidae (the family to which the giant mesquite bug belongs), but also Pentatomidae (stink bugs), Reduviidae (assassin bugs), and even Tettigoniidae (katydids, totally unrelated to the true bugs).

It is truly mind-boggling to think that an insect can carry out its own entire metamorphosis inside the egg of another insect, but that is just one of the many wonders of the wasp world that I hope to continue sharing with you on “Wasp Wednesday.”