I am frequently presented with descriptions or images of what people assume are “albino” insects. Usually, the specimens are clearly lacking pigment. The mistake is understandable, but there is precious little information widely available to explain what is actually going on. Allow me. 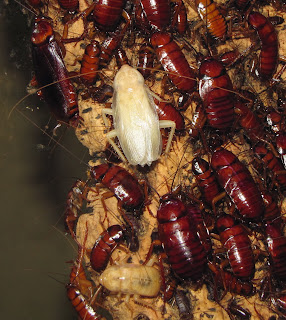 As far as I am aware, there is no such thing as an albino insect, spider, or other arthropod. Aside from some species endemic to caves where there is no sunlight, there are no species permanently devoid of pigment. What people are finding are specimens that have recently molted. In the immediate aftermath of shedding its exoskeleton (“skin”), an insect is generally soft, wet, and white, eventually hardening, drying, and darkening. The newly-minted adult American Cockroach shown above is a typical example. Note the slightly darker individual at bottom that had molted hours earlier.

Molting is known as ecdysis in scientific lexicon. It is a highly complicated process that is governed largely by hormones, and makes possible the astonishing transformations known as metamorphosis.

We came to learn of the complexities of insect development through the diligent work of physiologists that commenced around the early 1920s. Some rather primitive and grotesque experiments by Stefan Kopec in Poland demonstrated that just prior to molting the insect brain sends a signal to the prothoracic gland which in turn produces molting hormones called “ecdysones.”

Ecdysones are actually steroidal hormones. Their levels are elevated suddenly before molting, triggering a cessation of feeding and stimulating gene expression (and/or suppression?) that will apply to the next stage of development. 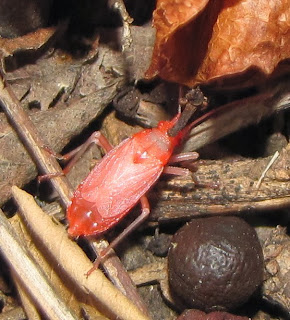 Many freshly-molted true bugs are pink

The presence of another hormone called “juvenile hormone” means that the next developmental stage will be another larval or nymphal instar. The absence of juvenile hormone (JH) in the haemolymph (insect blood) signals transition to the pupa or adult stage, whichever applies. JH is also important in reproductive biology in the adult male insect, even though its effects are dormant during metamorphosis.

Back to the actual process of molting. Epidermal cells begin manufacturing a new exoskeleton, while at the same time enzymes are liberated into a “molting fluid” that erodes the inner layers of the old cuticle, making those amino acids and sugars available for recycling into the new exoskeleton. Muscle attachments to the old cuticle are actually broken through rhythmic contractions of the insect’s body from back to front. 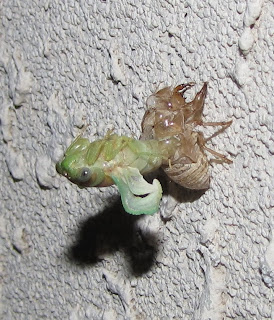 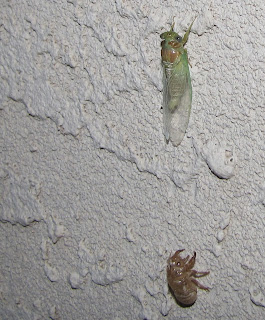 The old cuticle splits along predetermined ecdysial sutures, kind of like the perforations that allow you to easily open a box. As the insect extricates itself from the old exoskeleton, a waterproofing substance is deposited atop the new cuticle. This material is secreted by dermal glands.

Once the insect is free of the old “skin,” it takes in air to literally inflate itself to a larger size while the new cuticle hardens. This hardening process takes hours if not days, and is called “sclerotization.” This process begins prior to molting in the jaws (and sometimes other body parts like the crochets on the prolegs of caterpillars).

Insect larvae have a thinner, more flexible exoskeleton than nymphs, pupae, and adult insects. Therefore they are often not as densely pigmented. The shed exoskeleton of a larva with chewing mouthparts is often consumed by the insect itself so as to recycle the nutrients and eliminate evidence of its presence to keen-eyed birds and other predators that are alert to such signs of insects.

People who find the shed exoskeletons of insects may think that the ghostly objects are actually living specimens. The durability of shed exoskeletons is indeed astounding. Cicada shells may remain affixed to trees and other vertical objects for months after the adult insect has lived and died. Oh, and those stringy white things protruding from the seam where the insect emerged? Those would be the remains of major tracheae. Yep, even the tracheae of insects is sclerotized. 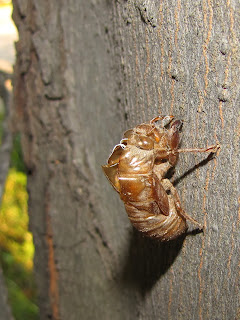 A shed exoskeleton is called an "exuvia," plural "exuviae"

Considering how vulnerable insects are during, and immediately after, molting, it is amazing how many survive to adulthood. Predators can get them while they are soft and immobile. They can become hopelessly entangled. Yet, here they are, the most successful and abundant of all organisms.