Happy “Fly Day Friday,” dear reader, and Happy Holidays, too. I hope you don’t have to share the leftovers with household pests, but I thought you might enjoy learning a little about one of the more common “guests” you could be entertaining at almost any time of year: The House Fly, Musca domestica, in the family Muscidae. 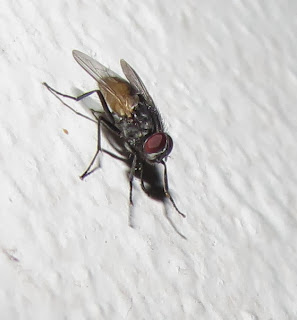 Naturally, house flies are most abundant during the warmer months, and you are unlikely to encounter them in the dead of winter unless you live in our southerly latitudes, and/or in a rural area. In fact, the House Fly is more common around farms, ranches, zoos, and stockyards than anywhere else. Why? A favorite food of House Fly larvae is horse manure.

Here in Colorado Springs, where your neighbor up the street might have a pony, we see more house flies than you might expect for an urban area. We don’t see them now, though, despite what some people may claim. The problem is one of mistaken identity. Several other flies are commonly mistaken for the House Fly.

House flies are not very large, measuring a mere 6-7 millimeters in body length. They are overall dull gray with beige or yellowish flanks (the sides of the abdomen). They have white faces with large, dark eyes. Those eyes converge and nearly meet at the top of the head in male house flies, while the eyes are farther separated in females.

House flies are smaller than most other flies they can be confused with. Many kinds of blow flies in the family Calliphoridae overwinter as adults and can be seen on sunny winter days basking on the south-facing exterior walls of buildings. Calliphorids are robust, and often metallic to some degree, especially on the abdomen. 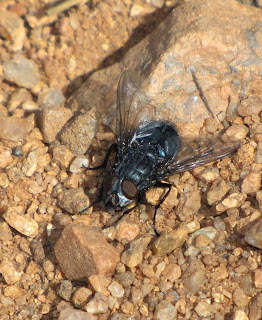 Flesh flies of the family Sarcophagidae sport bold, black stripes down the top of the thorax. They also have scarlet eyes and “tails,” the tip of the abdomen being red, most noticeably so in males. Both flesh flies and blow flies are usually more abundant in urban areas than house flies are. 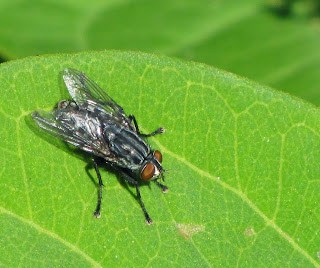 Heleomyzid flies are about the same size as house flies, but appear more slender with longer, narrower wings. These “sun flies” do appear in late autumn and early spring, sometimes indoors. Note the row of setae (hair-like spines) on the leading edge of the wing that distinguishes heleomyzids from similar flies. 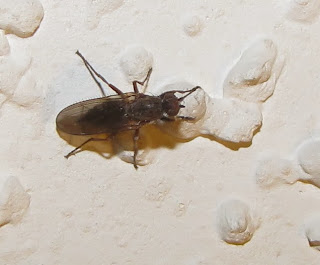 House flies groom fastidiously, for keeping clean allows them to more quickly notice and evade the swatter. Watch one and be amazed at the gymnastic maneuvers it goes through to shine its wings and polish its eyes. The devious personality we assign to these pests is no doubt heightened when they rub their front feet together like a vintage movie villain wrings his hands while generating a fiendish plot. 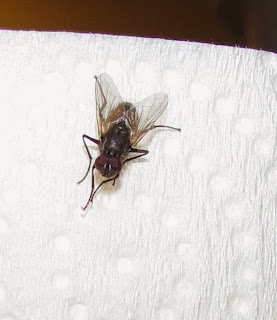 Despite their personal hygiene, there is no question that house flies are mechanical vectors of many pathogens that cause illnesses as mild as diarrhea or as serious as typhoid fever. It should be noted that the House Fly has mostly been implicated in the transmission of diseases. Still, house flies don’t discriminate between something edible and something that has already been eaten and passed out the other end.

House flies pass through complete metamorphosis and can go from egg to adult in as little as two weeks time under optimal conditions. There can be ten or twelve generations annually in temperate climates. The female lays batches of 75-150 eggs in a three or four day period, depositing the ova in a food source. Horse manure may be a preferred food, but any decaying organic matter suffices for breeding these insects. A maggot molts only twice after hatching from the egg, the third molt resulting in the pupal stage. The pupa is encased in a capsule-like shell that is the last larval “skin.” 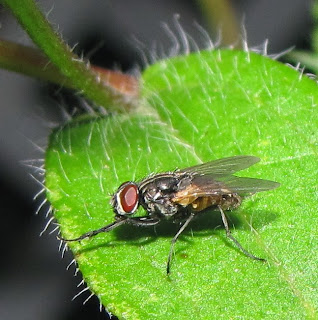 Proper sanitation is the best way to keep house flies at bay, but some people swear by the simple technique of hanging a clear Ziplock baggie, half-filled with water, on the outside of a screen door. Scientists have largely dismissed this trick as hogwash, but experiments haven’t established conclusive proof one way or the other (Mikkelson and Mikkelson, 2013).

House flies are found pretty much the world over, but apparently the species originated in the steppe regions of interior central Asia. Livestock traffic and other commerce no doubt spread the fly far and wide long ago.

Oh, back to the flyswatter. Wonder why you are seldom successful? Flies, like many insects, perceive motion much better than people. It is said that a House Fly would see a motion picture as a series of still images. Your best technique for nailing one of these pesky critters is to sl-o-o-o-wly lower your weapon to within a few inches of the target, then quickly slap it down….Yeah, good luck with that. 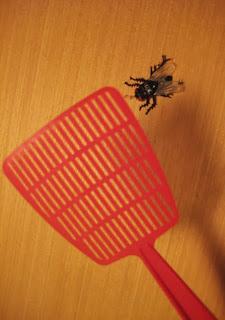