As I write this, the outdoor temperature here in Colorado Springs is a whopping 5° F. There are going to be few, if any insects out and about in those frigid conditions. A sunny winter day, even higher up in the mountains, could provide a different story. There are wingless crane flies that can be seen crawling across the snow in the dead of winter.

Last October 27, 2012, I was fortunate enough to take a trip with other members of the Aiken Audubon Society to Guanella Pass (Clear Creek County) in search of ptarmigans. We got skunked on the birds, but one person in our party spotted a tiny insect creeping across the snow. I instantly recognized it as a wingless crane fly, though I had only seen images of them until then. 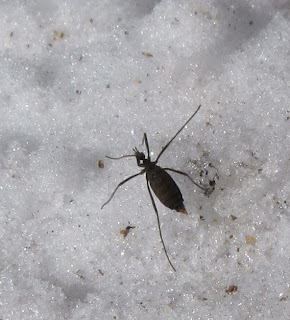 There are sixteen species of “snow flies” in the genus Chionea in North America. They are in the crane fly family Limoniidae, formerly a subfamily of the Tipulidae. While western species are mostly confined to mountain ranges, eastern species can be found in most forested areas, especially in regions that experienced glaciations during the most recent ice age. They appear most commonly in October and November, and again in February and March.

While these dark flies are most conspicuous on the surface of the snow, most of the time they are concealed in the tunnels of small mammals, beneath leaf litter, or fairly deep in caves. These situations help to insulate them from truly severe weather, and an adult snow fly may live up to two months. 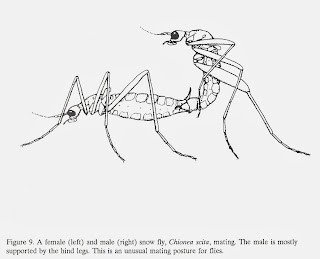 The life cycle of Chionea remains mostly a mystery. Every attempt to rear them in the laboratory has failed because no one knows what the larval stage feeds upon. We do know that an adult female fly can produce up to 194 eggs, each one laid singly. Lacking wings, the female fly can store eggs even in the thoracic cavity that is normally packed with wing muscles.

Eggs take eight days to three weeks to hatch under laboratory conditions. Larvae have fairly hardened mouthparts, suggesting they may be able to take in solid food. Just what that nourishment could be is up for conjecture. Maggots of distantly-related flies feed on fungi that grow on bat guano in caves, but that information may or may not be relevant to snow fly larvae. We do know the larvae feed and grow during the summer months, with pupation taking place in the fall.

Adult snow flies have few enemies, but we know that mice are among their predators. Believe it or not, this conclusion is reached from knowledge of the cycle of parasitic tapeworms. Rodent tapeworm eggs expelled in the feces of a mammal must be consumed by an insect, usually a larva. Once inside the insect, the tapeworm metamorphoses into a “cysticeroid” stage. There it remains until the insect is in turn consumed by a rodent. Tapeworm eggs have been found in the gut of adult snow flies.

Rock-crawlers, primitive insects related to mantids and cockroaches, are also predators of snow flies. Grylloblattids, as rock-crawlers are known in the scientific community, are found in isolated populations at high elevations in western North America.

How do snow flies keep from freezing to death? First, snow flies occupy the “subnivean” environment: a microclimate that exists in cavities beneath the snow created by arching grassblades, leaf litter, and rodent tunnels. These nooks and crannies offer protected niches with temperatures that are milder than the surface and air temperatures above.

Snow flies also have a body chemistry to cope with the cold. Many insects have glycerol in their body fluids, which acts as an antifreeze, preventing the formation of sharp, life-threatening crystals of ice inside the insect’s tissues. Differing enzyme systems also allow snow flies to function at lower temperatures than most insects. In fact, they are susceptible to overheating!

The temperature in the room where I write this is not that warm, either. I am not believing the 66° registered on the digital thermometer and, lacking my own internal antifreeze, will go open a can of soup. Stay cozy, friends. 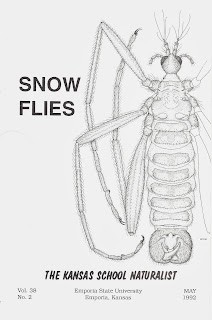