The Obscure Bird Grasshopper, Schistocerca obscura, might be better named the conspicuous bird grasshopper, for it is one of the larger and more eye-catching of its kind. An adult male can be 36-45 millimeters in length, while females can reach a whopping 50-65 millimeters (2-2.5 inches). They may startle you by exploding into flight from grasses and shrubs, as they are alert and quick to depart the scene if discovered. 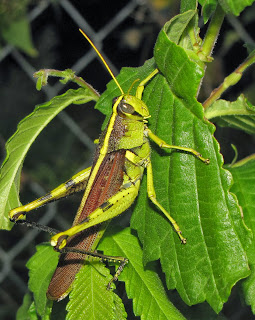 I had the privilege of encountering numerous specimens this fall when my wife and I visited the Prairie Center (Olathe, Kansas), and Leavenworth, in late September. Indeed, all the images here were taken on September 21.

This species is related to the famed Desert Locust, Schistocerca gregaria, that periodically makes headlines for its near apocalyptic swarms in Africa and southern Europe. S. gregaria is the sole Old World representative of the genus. We have ten species in North America, as of the most recent revision of the genus.

The term “locust” correctly applies only to the migratory phase of a few species that are normally solitary. Overcrowding in the nymph stage is what triggers the change. Nymphs literally rub elbows (er, “knees”?) while marching overland, and this constant jostling stimulates hormonal changes that lead to an adult stage that is more streamlined, with proportionately longer wings, than the average member of its species. 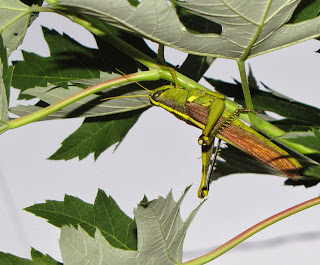 Locust swarms number in the millions if not billions, and while the insects themselves are powerful fliers, they also take advantage of storms, riding the winds ahead of fronts. When they settle, almost anything is fair game for their diet, including dead and dying members of their own kind. Most species in the order Orthoptera are, in fact, ominovorous.

Fortunately, The Obscure Bird Grasshopper and its New World relatives are rarely populous enough to be so destructive to agriculture. That is not to say that they do not migrate. They are capable of long distance seasonal migrations that can take them outside of their normal ranges. S. obscura is widespread in the eastern U.S., from Maryland south to Florida and west to Kansas, Texas, and even parts of New Mexico and southeast Arizona (south through most of Mexico). While it has been documented as far north as Pennsylvania and Nebraska, its roots are in the south and those northerly records are mostly a result of seasonal migrations during favorable years. 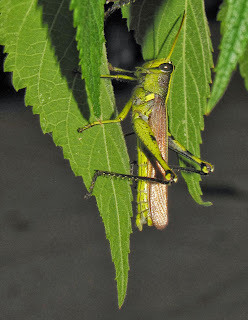 Several other species in this genus may closely resemble the Obscure Bird Grasshopper, and it is necessary to examine the tip of the male’s abdomen to make a concrete identification. The preferred habitat of this species is open woodlands, which contrasts a little with look-alike species. Adults can be found from July through September, a little earlier and later in the most southerly latitudes.

If you have trouble differentiating all the Schistocerca anyway, take heart. Species and subspecies delineations are still being debated among experts. Just count yourself lucky if you happen upon a population or migration of these stunning insects. They literally don’t come around that often. 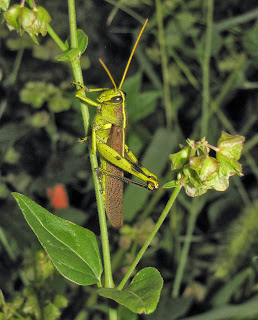