Downtown Portland, Oregon features a promenade on both sides of the Willamette River, and it is a stroll, bike ride, or jog worth taking simply for the scenery and people-watching. Should you be interested in spiders, it is even more worthwhile. Many manmade structures are occupied on the exterior by the Bridge Orbweaver, Larinioides sericatus. Even in December and early January of this year, specimens of varying ages were abundant. 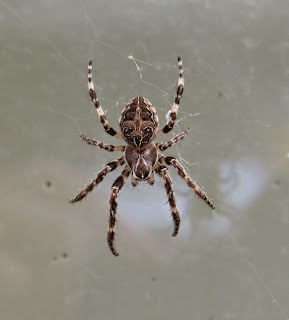 This species is also known as the "Gray Cross Spider," and it is easily confused with the very similar Larinoides patagiatus, which has no common name. Further complicating matters, the Bridge Orbweaver has been going by the Latin name L. sclopetarius until very recently. A revision of the genus Larinioides was published in the journal Zootaxa about two months ago (see citation below). 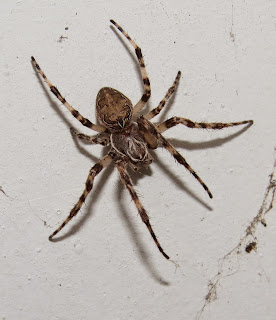 These are fairly large spiders, mature females measuring 8-14 millimeters in body length, and males 6-8 millimeters. Their legspan makes them appear even larger to the untrained eye. Both genders share the same distinctive pattern on the carapace (top of cephalothorax) and abdomen. The overall color is generally gray, but some specimens tend toward brown. 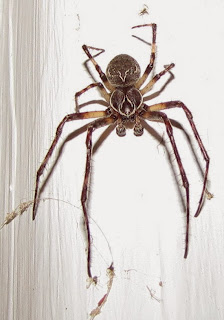 The spider normally hides in a retreat on the periphery of its circular web during the day, and emerges to repair or reconstruct the snare at night. The spider then spends the night in the hub of the web, hanging head down. The spiders can also be there in the center of the web on overcast days, and juvenile specimens tend to be more likely to occupy the hub during the day than mature individuals. 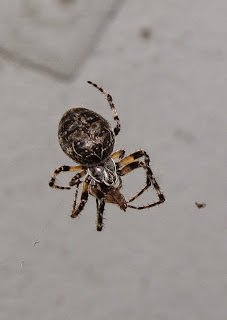 Female making a kill in Massachusetts

While this species is particularly common close to water, where emerging aquatic insects like midges and mayflies are an abundant food source, I have also seen the Bridge Orbweaver in other settings in western Massachusetts. It can be a fixture around outdoor lights, where insect prey is drawn in great numbers. Spiders are quick to take advantage of resources like that, and competition for prime "web sites" is keen. 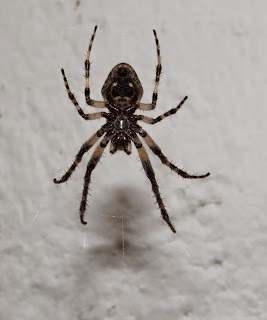 Larinioides sericatus is found not only in the U.S. and Canada, but Europe as well. It is strongly suspected that it was even introduced to North America from the Old World. Records from Asia are now attributed to yet another species, L. jalimovi. Here, the Bridge Orbweaver is known from the maritime provinces, Quebec, Ontario, Alberta, and British Columbia south to Minnesota, Wisconsin, Illinois, Indiana, Ohio, New England, Virginia, Kentucky, Washington, and northwest Oregon. Isolated records exist for extreme northeast North Carolina, Oklahoma, and northwest Utah, at least some of which probably need confirmation. Recent voucher specimens have been taken in Long Beach, California. 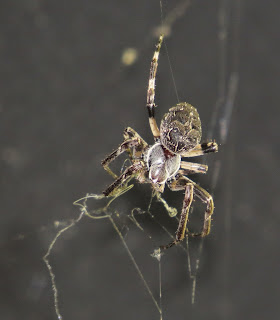 Special thanks to Ivan Magalhäes and Laura Lee Paxson on the Facebook page for the American Arachnological Society for setting me straight as to the proper scientific name for this species. 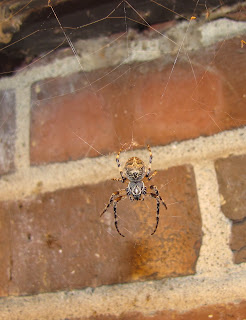