Identifying wasps in the field is often problematic for a number of reasons. Wasps move quickly, and often you only get a glimpse. Mimicry complicates matters and you may actually be looking at a fly, moth, beetle, or true bug. "Field marks" are seldom visible, at least without a magnifying lens. One exception is the genus Tachytes, in the family Crabronidae. The larger species in the genus often have huge green eyes. 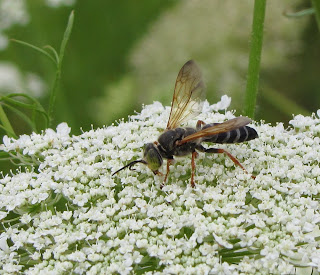 These insects have been referred to as "sand-loving wasps" in some literature, but they nest in a variety of soil types. I think they deserve the name "green-eyed wasps" because that character is more vivid, even if it does not apply to every species. Males in particular have very large eyes, the better to detect passing females or rival males while scanning the landscape from their perch on a stone, leaf, flower, or twig. 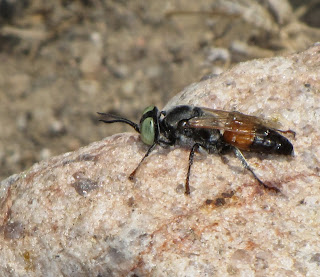 Interestingly, one of the hallmarks of the Larrini tribe within the Crabronidae is the reduction of their "simple eyes" (ocelli) to the point of being mere "scars." In Tachytes, the ocellar scars are shaped like golf clubs, having long "tails" running part way down the head. The image below shows the scars between the compound eyes, at the point where they begin to diverge from one another. 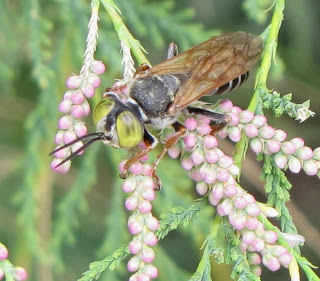 Close-up of Tachytes from Colorado

The female wasps excavate burrows in the ground, the tunnels ranging from 7 centimeters to nearly one meter in length, and to a depth of 7.5 to 70 centimeters. Several individual cells are arranged along the length of the burrow, or at the end of tunnels that branch from the main shaft. Some species dig their nests just inside the entrances of burrows made by other organisms such as rodents, lizards, or cicada killer wasps; and at least one species works at night.

All North American species provision those cells with immature grasshoppers (Acrididae), pygmy grasshoppers (Tetrigidae), katydid nymphs (Tettigoniidae), or pygmy mole "crickets" (Tridactylidae). The female wasp paralyzes the victim with her sting, then straddles it, grasps it by the antennae with her jaws, and flies it back to her nest. There, she deposits her prize in one of the cells. One to thirteen victims are placed in each cell, and an egg is laid on the last one. 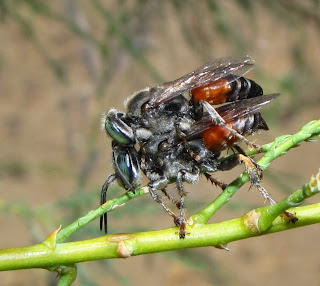 Male Tachytes atop female in Colorado

Males employ two strategies to find mates. They emerge before females, so at first they defend small territories in the vicinity of areas where females are likely to emerge. Later in the season they defend territories around nesting sites. I have observed them defending territories around nectar resources, too, namely a solitary blooming saltcedar tree (Tamarix sp.) in a large expanse of degraded shortgrass prairie here in Colorado Springs.

The male pounces on the back of a female, pinning her wings to her body, and then beginning courtship behavior. Apparently this amounts primarily to waving his antennae frantically over the female's face, as shown in the short video below. This behavior may not hold true for all Tachytes species, and certainly the duration of courtship and copulation can vary dramatically. 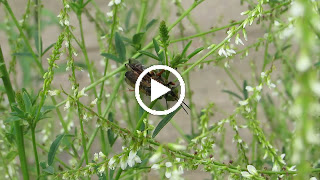 Should the female be receptive, mating ensues. The image below clearly shows a male deploying his....um....ahem...."junk" in preparation for mating. Ok, the technical term is "aedeagus," composed of two "penis valves," and it is the blunt, central structure protruding from the tip of the abdomen in the image. The longer, more slender appendages framing the aedeagus are the "gonostyles." The "volsella" is a shorter spur at the base of each gonostyle. Insect genitalia are complex organs designed to work as a female "lock" and male "key" to prevent cross-breeding with similar species. Indeed, dissection of the male genitalia is often required for species identification in many insects. 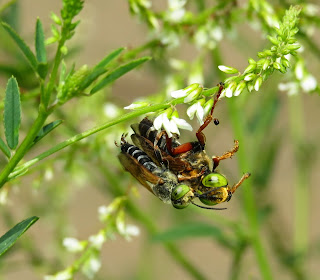 There are 35 species of Tachytes in North America north of Mexico. They are among our more common solitary wasps, easily observed as they feed on flower nectar, though they flit rapidly from blossom to blossom. Males also land on foliage, stones, or the ground, usually returning repeatedly to the same perch or one very close by. This represents the territorial defense behavior, and it allows for great photographic opportunities provided you don't make sudden movements. Happy wasp watching. 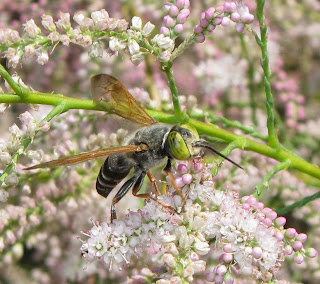