Right place, right time, and with a little help from your friends. That is how discoveries are made. All of those factors came together to verify the spotting of a Mexican Silverspot butterfly, Dione moneta on the eastern edge of Colorado Springs, Colorado on April 18, 2017. 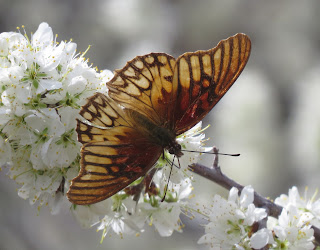 Sharon Milito is a geology lecturer at University of Colorado, Colorado Springs, and a retired Colorado Springs School district eleven teacher. She has also been a volunteer with the city for ten years, doing paleontology surveys and acting as a science education consultant. She has, in her volunteer capacity, access to places not open to the public, including Jimmy Camp Creek Park on the very eastern edge of the city.

Sharon and I went scouting on Tuesday, April 18, and she took me to specific locations that seem to have a slightly greater biological diversity in the sprawling former ranch. It is a unique composite of many different habitats including mostly shortgrass prairie punctuated with sandstone bluffs. Some of the bluffs are covered in Ponderosa Pine forest. There is also Jimmy Camp Creek itself, a drainage fed by numerous springs within the property. There is almost always water in the creek, and some surprisingly deep pools in the sandstone bed. Otherwise, lots of mud trampled by cattle that still graze the park. 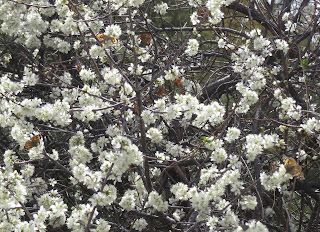 One of the areas we went to boasted a grove of wild plum, Prunus americana, in full bloom. It was like walking into a fairy tale. Hundreds of butterflies were sipping nectar from the blossoms. Most were Painted Lady, Vanessa cardui, but there were also Red Admiral (Vanessa atalanta), Milbert's Tortoiseshell (Nymphalis milbertis), Gray Hairstreak (Strymon melinus), Marine Blue (Leptotes marina), and several Monarchs (Danaus plexippus). Most of the Monarchs seem to have had a rough migration up from the south. The whole morning scene was mesmerizing and enchanting. 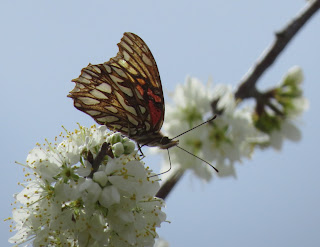 Eventually, Sharon called me over to ask "what about this one here?" and pointed out a butterfly that had me perplexed initially. At first I thought it was a Variegated Fritillary, which would be expected at this time of year. The wing shape was a little odd, though, and when I glimpsed the underside, it was studded with large, silver spots. Wow, a Gulf Fritillary. That is not a very common butterfly in these parts. I got several images of the insect and we went our merry way. Later, I posted what I thought was our somewhat significant find to the Facebook group "Arthropods Colorado" for more folks to enjoy. 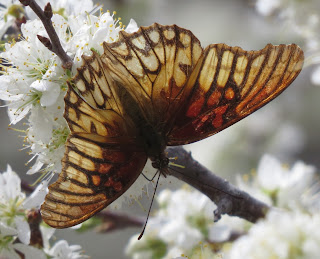 Enter Robb Hannawacker. He raised the stakes substantially higher by proposing that the butterfly was in fact a Mexican Silverspot, Dione moneta. I was embarrassed to admit that until he mentioned it I was not even aware of the species at all, let alone where it is supposed to occur. Robb mentioned the identifying markings, and how our specimen matched them, and it is now pretty obvious that is what we have. 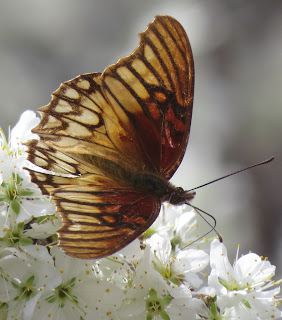 According to my copy of the Kaufman Field Guide to Butterflies of North America, the Mexican Silverspot "Strays to south Texas, rarely to southwest and Big Bend region. More at home in mid-elevation tropical woodlands but reported to breed sporadically in lower Rio Grande Valley....Recorded late spring to late fall (multiple broods in Mexico." The butterfly['s normal range extends from Mexico through Central America to Brazil. The larval foodplants are passion vines, which do not occur in Colorado. 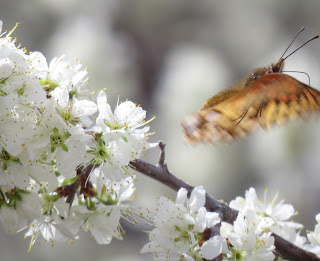 The most recent northern record for the species in the online database of Butterflies and Moths of North America was on May 8, 2005 in Roosevelt County, New Mexico, by Christopher Rustay. As near as I can tell, this is the first record for Colorado, at least of recent vintage. Please alert me to additional historical records. Thank you. Now, go forth and see what amazing species you can find.