Predator and Prey: Ants versus "Lions" and "Tigers"

My last post here chronicled predation on termites by ants in the wake of swarming events in my neighborhood. Today I shall turn the tables and demonstrate that ants are not immune to predators themselves. Antlions and tiger beetles are among the few predatory insects that kill and eat ants. Ants can bite, and either sting, or spray formic acid to defend themselves. One cannot blame a potential predator for avoiding that kind of trauma when ants are not much more than an hors d' oeuvres anyway. 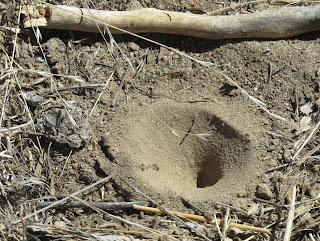 While looking for tiger beetles in Lake Pueblo State Park, Colorado on March 18, I was surprised to find the funnel trap of an antlion larva in the middle of a game trail. Usually, the pitfall traps of antlions are clustered, and situated in sheltered areas like beneath a rock overhang, at the base of a tree, or other location where rain seldom if ever reaches them. Since the only genus of antlions in the U.S. that makes such traps is Myrmeleon, I knew that had to be the critter lurking at the bottom of the pit. 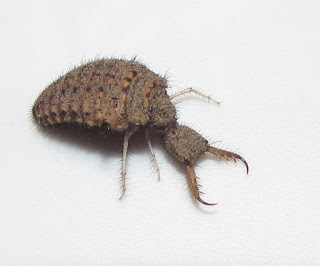 Buried just beneath the dusty sand was a single, chubby larva, studded with spines on various parts of its body, and with menacing sickle-like jaws. Nearly blind, the insect relies on its sensitivity to vibration to detect potential trouble or potential prey. When an ant or other terrestrial insect blunders into the antlion's steep-walled trap, the larva becomes alert and proactive. It may use those jaws to fling sand onto its victim, hastening its descent to the bottom of the funnel. The predator then grabs its prey and injects it with enzymes that paralyze it and begin the digestive process. 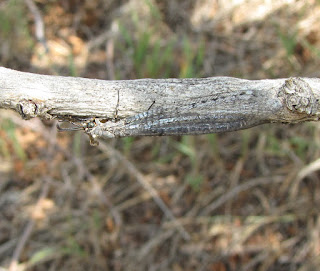 Antlions go through complete metamorphosis, so the larva eventually constructs a cocoon of sand and silk in which it pupates. An adult antlion, more than making up for its youthful ugliness with its delicate wings and slender body, emerges from the pupa at a later date. 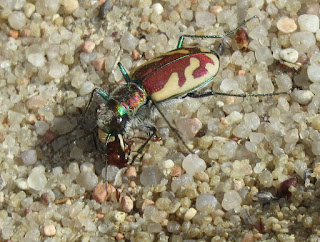 The fate of ants in the jaws of an antlion may seem morbid, but it is still better than what happens to ants caught by adult tiger beetles. After two consecutive days of unsuccessful searching for tiger beetles closer to home in Colorado Springs, I finally found at least three Blowout Tiger Beetles, Cicindela lengi, on the afternoon of March 23. I was witness to their ability to swiftly dispatch lone worker ants with their huge, toothy jaws. 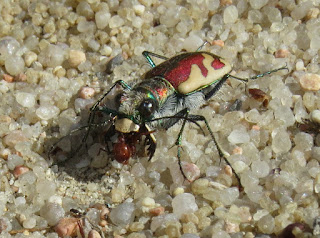 Most tiger beetle species are agile daytime hunters that haunt sandy habitats like the sandhill bordering the vacant lot where I found these specimens. The insects run quickly, stop, then run again. They fly a short distance if spooked by a potential predator. Their eyesight is keen, vastly more sensitive to motion than a person; but they focus slowly. They literally outrun their eyesight when pursuing prey, and must stop to refocus before rejoining the chase. This herky-jerky hunting strategy is still effective, and few insects spotted by a tiger beetle will live to tell the tale. 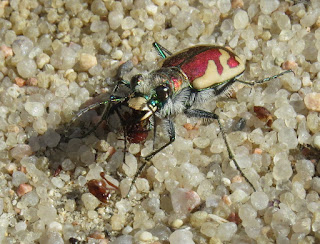 Off with its head!

Tiger beetles appear to have the speed and power to attack insects and other invertebrates at least as large as they are, but most of their victims are quite small. Ants seem to be near the limit of what they will take. They make short work of even the feisty Western Harvester Ants, Pogonomyrmex occidentalis, that are abundant in Colorado Springs. The jaws of the beetle quickly dismember the ant, leaving a trail of carnage around the beetle. The beetle's next victim may be a tiny, unidentifiable invertebrate it plucks from between sand grains. 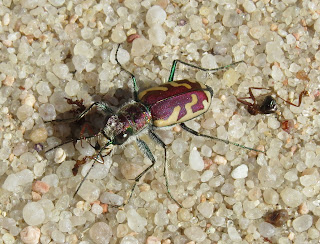 Another C. lengi surrounded by the remains of its Formica sp. ant lunch

Most tiger beetle enthusiasts are fond of remarking that they are glad tiger beetles do not get any larger in size than they do. Indeed, I would not be prowling around dunes and beaches if there were even raccoon-sized tiger beetles in the neighborhood. Since they are much smaller than that, I recommend going in search of them. Their beauty and behaviors are sure to capture your curiosity and sense of wonder.