Sometimes you find something that you think might be a major discovery, only to learn that is not the case. Does it diminish your enthusiasm for the whole experience? Not at all. That is especially true when you find something as colorful as a male of the jumping spider Euophrys monadnock. Your expertise is in fact enhanced no matter what expectations you start out with. 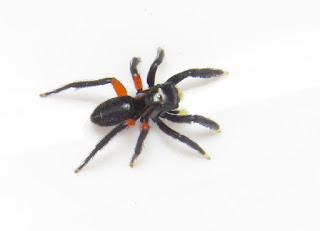 The morning of June 8 I found myself granted access to part of Cheyenne Mountain State Park where the public is...."discouraged" from going. It is close, too close, to NORAD installations on the mountain, an important part of national security. One of the perks of being a park volunteer is getting opportunities like this to investigate more pristine and unique habitats. 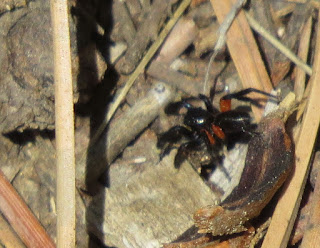 Anyway, on the ground beneath Ponderosa Pines and understory thickets of Gambel's Oak and other shrubs, I spotted a little (3-4 millimeters) jumping spider hopping over the grass and leaf litter. My initial assumption was that it had to be a species of Habronattus. Members of that genus are often about the same size, usually ground-dwellers rather than arboreal, and frequently adorned with ornate colors in the male gender. Colorado also appears to be an epicenter of Habronattus diversity. I captured the spider in a plastic vial so I could get better images later. 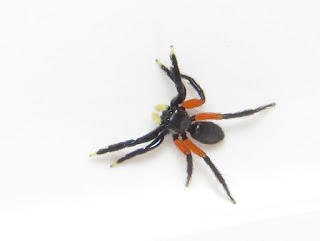 Imagine how puzzled I was when, back at home, an internet search could find no matches with any Habronattus species. I think I finally "Googled" something like "Salticidae, black, orange legs," and lo and behold, I got some image results for Euophrys monadnock. It was not recorded (yet) for Colorado in Bugguide, by online standby. Additional research did find several records of the species for Colorado, even of recent vintage.

The Colorado Spider Survey, based at the Denver Museum of Nature and Science* and supervised by Dr. Paula Cushing, is an amazing resource. There, I found records of this species from Roxborough State Park in Douglas County, on August 9, 2014; Upper Maxwell Falls in Jefferson County, July 29, 2010; Lump Gulch in Gilpin County, June 24, 2009; and 1.6 miles along FR 175 NW of Mt. Pisgah, also in Gilpin County, on August 10, 2009. Using the World Spider Catalog, which has PDF files of almost all the scientific publications devoted to spiders, I found perhaps the original record of Euophrys monadnock for Colorado: collected in the 1890s in "West Cliff," now spelled "Westcliffe," by Theodore Cockerell. The species is one of northerly latitudes and high elevation, found across Canada and south to California, North Dakota, Wisconsin, Ohio, and Pennsylvania, and along the Rockies. 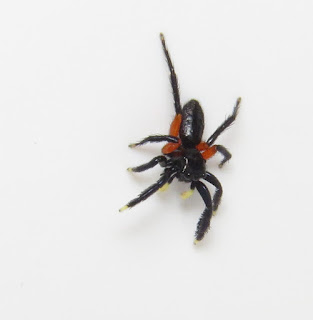 A Wikipedia article on the species explains the species was first described in 1891 by James Henry Emerton, a preeminent arachnologist of his day. The male gender, anyway, certainly cannot be confused with any other spider. The female is more....subdued, shall we say, but that is the case for most jumping spiders where there is often extreme sexual dimorphism (graphic differences between genders).

The male makes full use of his contrasting colors in displaying to a female. He lifts his front legs, which are adorned with thick brushes of black hair. He also lifts his third pair of legs to expose those bright orange femora, and orients the fourth pair of legs such that the female can see those orange femora as well. Jumping spiders are, unlike web-building spiders, highly visual, with acute eyesight that is not approached by any other land invertebrate. 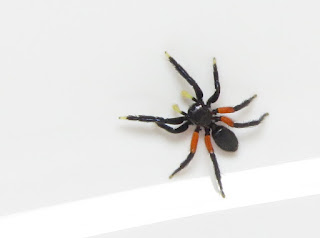 My wife and I managed to get a few pictures of this highly active spider inside a casserole dish at home, before she released the spider outside the park, but at roughly the same elevation, same habitat, and same mountain for that matter. From a scientific perspective, it is usually preferable to retain the specimen, but considering the utter uniqueness of this species, we felt it was unnecessary to sacrifice this one. 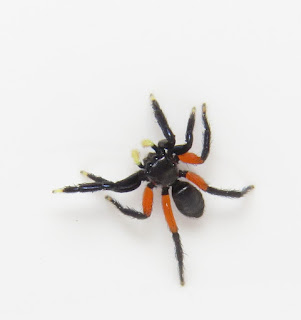