Sometimes, even with your book-learned knowledge, it takes you a moment to recognize something when you see it firsthand. Such was the case when my wife and I encountered a softball-sized nest of the Aerial Yellowjacket, Dolichovespula arenaria, under the eave of a small building in Green Mountain Falls, Colorado, on July 10. Worker wasps were coming and going as they should, but another wasp was periodically emerging, too, and it was not like the others. 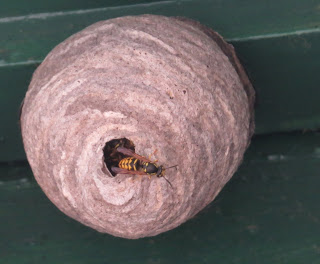 The other wasp was larger than the workers, and instead of being black and yellow, it was black and white. It eventually dawned on me that I was witnessing a social parasite in action. The black and white wasp was a female Dolichovespula arctica (aka Dolichovespula adulterina). Her species has no worker caste like the Aerial Yellowjacket, only reproductive females, and males. 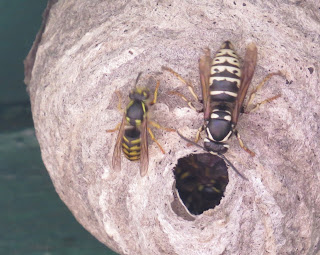 The Aerial Yellowjacket is the primary host species for this social parasite. The D. arctica female infiltrates an existing colony of the host, when it is underway but before worker wasps have emerged from the pupa stage. The parasite does not usually kill the host queen immediately, but waits until she has produced a fair number of workers. She may also evict the queen, or follow her around and eat the eggs she lays in the cells of the paper comb. By the time workers of the host species have matured, they serve as a workforce to raise the offspring of the social parasite. It is a subtle form of slavery of which the host species seems unaware. 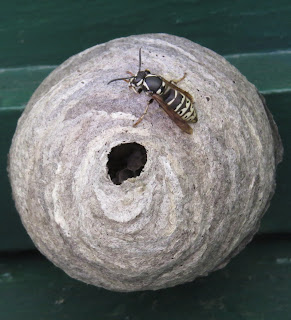 Why the female D. arctica repeatedly emerged from the interior of the nest to wander around on the exterior paper envelope is a mystery to me. Perhaps the workers tolerate her only for short periods, and her foreign scent would overwhelm the normal colony odor if she lingered longer inside? 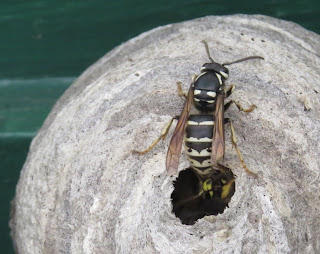 The parasite is probably fairly common, but seldom seen. The species ranges from Alaska and throughout Canada save for the Nunavut Province, south to the northern U.S. and along major mountain ranges to Kentucky, Georgia, Arizona, and California. It appears to be limited to high elevation coniferous forest habitats here in Colorado; and that is probably the case over much of the United States.

Lest you feel saddened about the fate of the host colony, remember that worker yellowjackets are still capable of laying unfertilized eggs that ultimately give rise to males of the species. So, the host colony can still reproduce, but is limited to liberating only males during the late summer reproductive season. 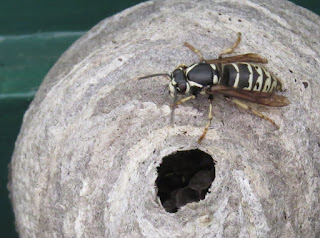 Take a moment when you encounter insect activity, what it reveals over even a short period of time may surprise you. Even nests of social wasps can be approached quite closely, as long as you do not jar the nest or otherwise create hostile vibrations. I had to get very close with my camera because my flash was not working. Not once was I even harassed by a worker wasp.