A Case of Predator Mimicry in the Bee Fly Genus Epacmus? (Diptera: Bombyliidae)

In the course of photographing insects in Colorado Springs, Colorado, USA, at a nearby vacant expanse of prairie, soon to be a new housing development, I stumbled upon something interesting. Not until I got home and reviewed my images did I recognize something startling on an otherwise ordinary little bee fly in the genus Epacmus (assuming my identification is correct). Whether this has been documented before I do not know, but the phenomenon is well known in other insects. 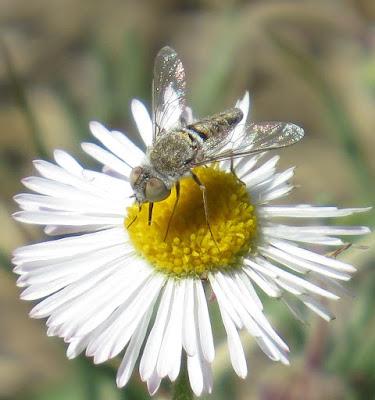 Predator mimicry, or elusive mimicry, or aggressive mimicry, is when a prey species mimics one of its predators. This is probably a more widespread strategy than we currently recognize because we are not at the same scale as the predator and prey, and cannot easily interpret what constitutes such mimicry. We do not even enjoy the same perspective, so rarely experience the full effect.

It was not formally recognized, or at least not published, until 2006, that metalmark moths in the genus Brenthia have underside wing patterns that greatly resemble the face and legs of an oncoming jumping spider. They eye arrangement, chelicerae (jaws), and front two pairs of legs are all illustrated on the wings of the moth, when properly displayed by the insect. The moth would make an easy meal for the spider, but not if it presents the illusion that it is a spider. Evolutionary genius.

Spider mimicry is also exploited by other insects, including some fruit flies (family Tephritidae) and planthoppers (Fulguroidea). The bold patterns on the wings of some fruit flies greatly resemble the leg posture of some spiders. Some of the flies enhance the graphic imagery by moving their wings deliberately in a manner utterly convincing of a spider’s movements. 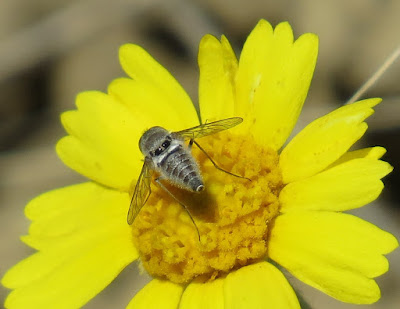 This brings me to the little bee fly I noticed on flowers in that prairie habitat. Viewed from above, Epacmus is an attractive, tapered, fuzzy insect about 7-10 millimeters in length, with delicate wings and something of a smiley-face pattern where the abdomen meets the thorax. Cute. Look at one directly from behind and you get an entirely different picture. Suddenly, you see the big black eyes of a jumping spider. Four black, polished, hemispherical bumps on the rear of the thorax are a perfect match for the eyes of a small salticid (jumping spider). This is reminiscent of raised features on the thorax of the Brazilian fruit fly Ceratitis alba (See Hill, David E., et al. 2019). 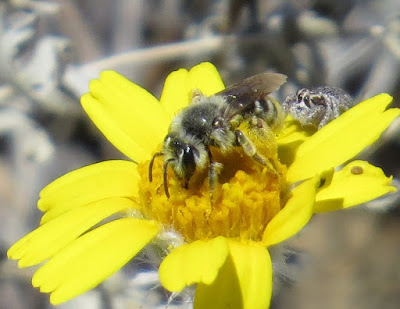 Ok, so how often might the fly encounter a jumping spider? More frequently than you might imagine, even on flowers. Another photo I took of a mining bee revealed a jumping spider right on her tail. I hadn’t noticed the spider until I looked at the image later, at home. Habronattus jumping spiders are abundant in this prairie habitat, and hunt exactly where you expect to see bee flies: on the ground, vegetation close to the ground, and on flowers. The spiders are small and cryptic, easily overlooked. 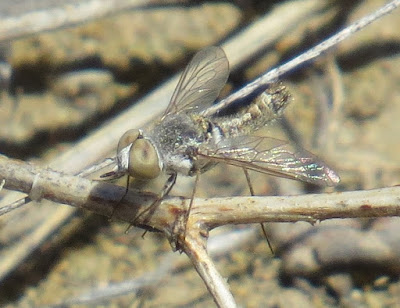 What else are we missing in our observations of insects and their spider predators? Keep observing and you, too, may make a startling addition to our collective scientific knowledge.

Note: At least one world authority on bee flies (Bombyliidae) asserts that Epacmus may not be a valid genus, but a subset of the genus Aphoebantus instead. 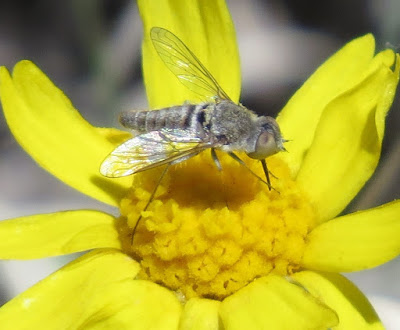 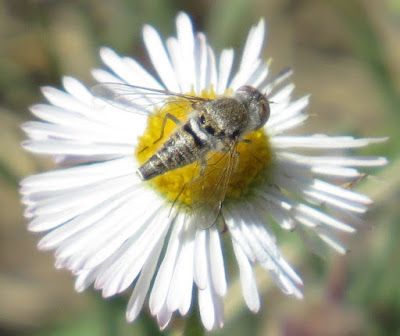