Last weekend, June 4-5, my wife and I had the opportunity and honor to participate in a bioblitz of a newly-acquired property of the Missouri Prairie Foundation. Thoh-Dah Prairie is located in St. Clair County, Missouri, U.S.A., and is named for the Osage word for “peace” or “peaceful.” Indeed, it is an idyllic landscape. 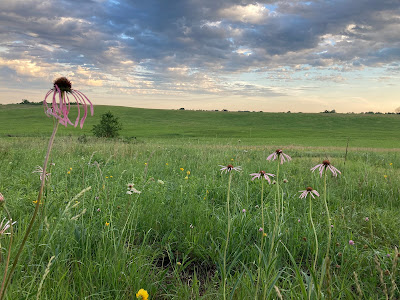 According to MPF, colonialism has been positively brutal to prairies in Missouri. Pre-settlement prairie amounted to roughly fifteen million acres. Today, only about 51,000 acres remain, in scattered patches that are at best tiny refuges of native grasslands. Given the scarcity of such a unique ecosystem, Heidi and I were eager to discover what insects live there. 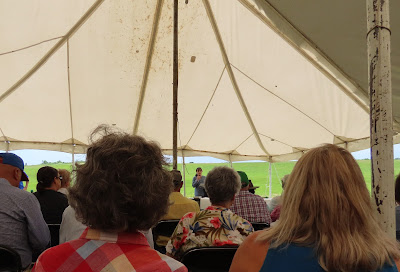 Carol Davit addresses the crowd before the dedication

An enormous tent was set up to accommodate everyone, and several parties also erected their own camping tents to spend the night. Plenty of resources were provided by MPF, and memberships and merchandise were available for sale along with free publications from Missouri Depart of Conservation. 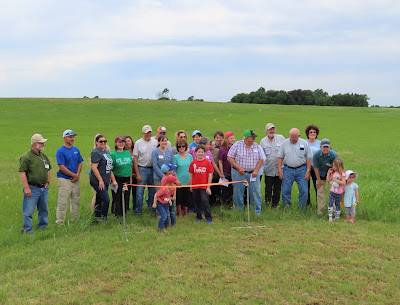 Ready for the ribbon cutting

The event was kicked off with a ribbon-cutting ceremony to dedicate the parcel, now preserved indefinitely thanks to the generosity of the family that managed hayfields there for generations. We immediately took to exploring, and were amazed by the floral diversity alone. Most of the plants we saw would not be found in your average vacant, neglected field. Many are endemic only to this kind of prairie. 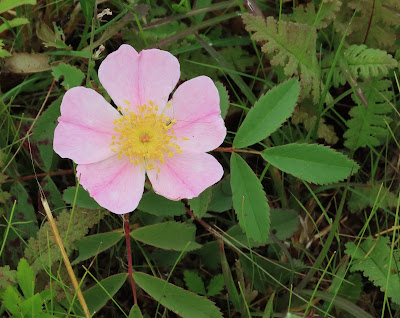 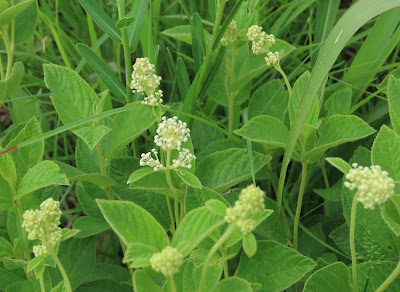 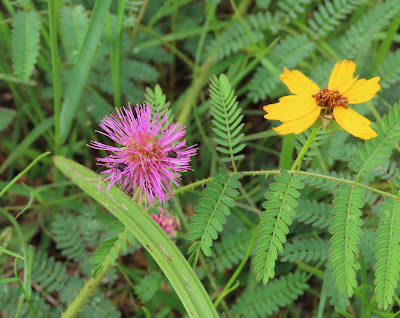 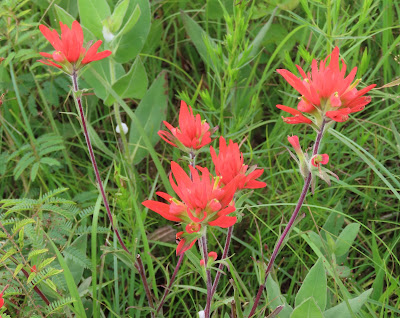 Most of the area we covered in our survey of organisms was subjected to a prescribed burn in autumn of last year. You could scarcely tell, as it was lush and green. Dickcissels and Grasshopper Sparrows called from all directions. Swallows frolicked low over the grasses. The skies remained overcast almost the entire time, and there was a brief, late afternoon shower, but we still found plenty of insects. 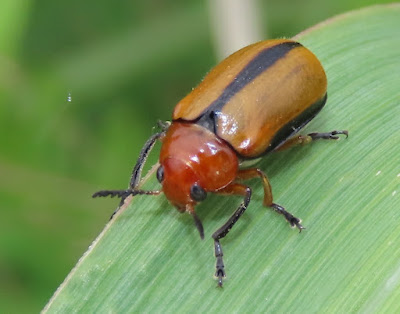 Following an afternoon of hiking the gentle slopes, we were treated to a potluck. Each party brought a dish, but some of the MPF personnel fried up some fish, and also cooked quail and venison. There were plenty of salads and desserts, including homemade ice cream. Now that is how you do a proper bioblitz. 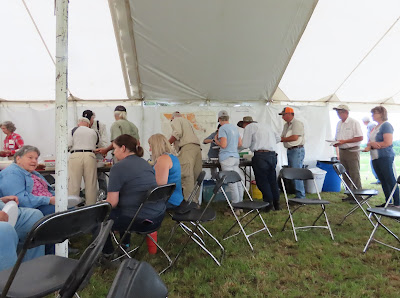 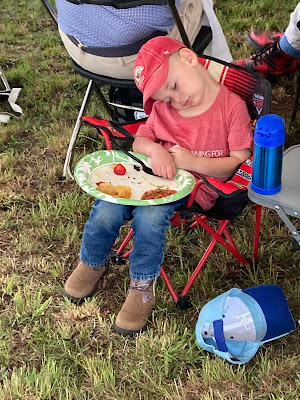 ....and tired
(photo used with permission)

After dark, a sheet and blacklight were set up. Despite the cooling effect of the earlier rain, several interesting species flew in. 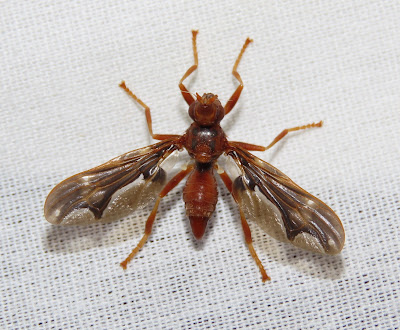 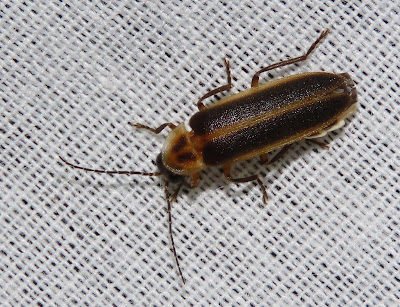 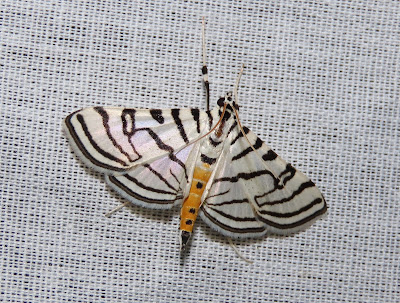 Sunday, we explored in a different direction, making use of the mown paths that provided avenues for the many, enthusiastic bioblitz participants. Prairies are not all dry and dusty, we learned! There were several wet, boggy areas that proved to be almost entirely different habitats from the surrounding hills that drained into them. 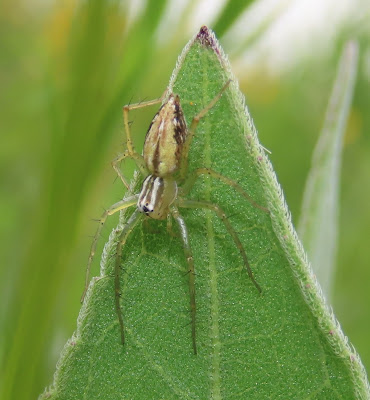 A couple of “tree islands,” thick stands of trees and/or shrubs, offered yet another kind of habitat. One larger group of trees surrounded a large pond that we could not comfortably access. The edges of those tree islands were perhaps richer in insect fauna, but such ecotones are well-known for higher diversity. 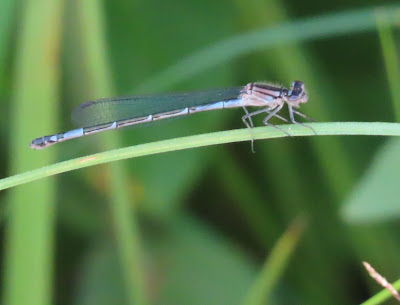 We got a little carried away, and by the time we returned to “base camp” a little after noon, we found the tent deserted. We are already looking forward to making another trip there to see how the area changes with the seasons, and contribute more data to the MDF for use in education and conservation. 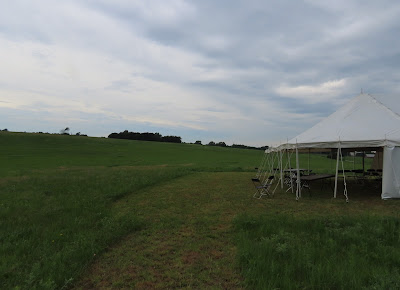 Heidi took so many great photos that you can look forward to another blog post of images and captions alone. Meanwhile, please consider membership in the Missouri Prairie Foundation. It has a long, strong record to success stretching over 56 years (since 1966).

Besides identifying, acquiring, and managing remnant prairies such as Thoh-Dah, MDF also encourages rewilding of your own property through the Grow Native! project. This is one of the resources we are using to begin converting our own lawnscape into something much more compatible with the native landscape. 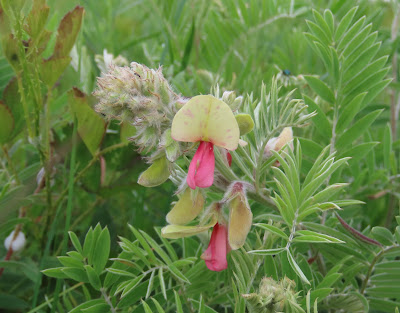 Many thanks go to Carol Davit, Executive Director of MPF, Jerod Huebner, Director of Prairie Management, and Erika Van Vranken, Special Projects Coordinator, and Sarah Hinman, board Secretary, for making this event such a success. These are empathetic and appreciative people.