The Vespidae subfamily Eumeninae includes primarily solitary wasps that nest aboveground in pre-existing cavities (hollow stems or brambles, holes in wood) or in free-form mud nests. One morphological trait eumenines share with the social wasps also in the family Vespidae, is wings that fold longitudinally. Eumenines (potter and mason wasps) are generally black with white, rusty orange, and/or yellow markings. In the southeastern United States, some species have very prominent red markings and in some instances, these red markings replace the white or yellow markings of northern populations. Generally, eumenines hunt various families of moth larvae (caterpillars) although a minority prey on beetle larvae.

Potter and mason wasps use mud to line, partition, or construct their solitary nests. For those that nest in pre-existing cavities, partitioning the cavity with mud results in individual cells or rooms in which a single larva develops as it feeds on the cache of prey provided by their mother. Free-form mud nests are either single-celled (ex. potter wasps in the genus Eumenes) or contain multiple cells, comprised of multiple cells adjoining one another.

Video 1 caption: A female works the wet mud bolus with her mandibles to add an additional layer of mud to the edge of a partially completed cell.

For those mason or potter wasp species that construct free-form mud nests, a significant amount of time and energy is allocated toward water and soil collection to make mud. Mud is used to make one or multiple cells/enclosures that house a number of caterpillars, and eventually the developing wasp larva. To make mud, the wasp female first finds a water source, imbibes the water storing it in her crop, then searches for the perfect soil type to begin collecting soil particles. Each mason wasp can have their own unique soil preferences, some preferring sand, while others may seek out sandy loam soil. Perching on the ground, she scrapes and gathers a ball of soil particles in her mandibles and simultaneously regurgitates some water to form a mud bolus. When the bolus is sufficiently moistened and large enough, she carries it back to the nest held in her mandibles. 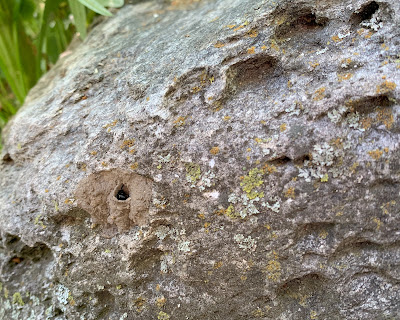 A female spends the night in a newly formed mud cylinder/cell. She’ll complete construction and provisioning of the cell the following day.

This month in my garden, I found a Walden's mason wasp female (Ancistrocerus waldenii) constructing a free-form mud nest on the side of a rock. This wasp species prefers to construct its nest attached to a hard surface such as a rock, concrete, or even on the side of a terra cotta flower pot! The rock in my garden that she selected has multiple concave indentations; these convenient divots helped form the back wall of the mud cells. After selecting the nest site, nest initiation begins with the construction of a single mud cylinder, and each layer of mud that forms the cylinder requires several mud-collection foraging trips. Once the cylinder-shaped cell is large enough to hold several moth caterpillars, the wasp female lays a single egg, suspended from the roof of the cell by a silken thread. Many solitary wasps lay their egg on one of the prey cached in the cell after they have fully provisioned the cell; eumenids, however, typically lay their egg in an empty cell prior to provisioning the cell with prey. 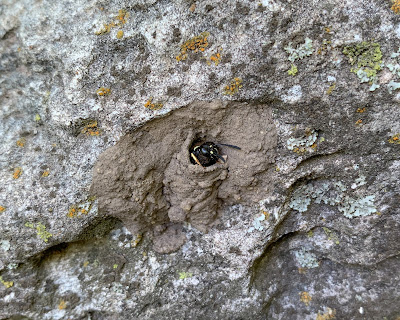 A closeup of an Ancistrocerus waldenii female peering out of an incomplete mud cylinder. This unfinished cell provides a convenient enclosure for her to spend the night, rest, or avoid inclement weather.

Providing food for her future developing larva comes next. She hunts for moth caterpillars on plant foliage, captures one, stings it to cause paralysis, then carries the caterpillar clutched beneath her. She fills the cylinder with multiple immobilized caterpillars, an average of nine, seals off the end of the cylindrical cell with mud, then begins the construction of the next, adjoining mud cylinder. Her egg, safely suspended from the roof of the cell, will hatch in the next few days and the tiny, first instar larva will drop onto the cache of caterpillars and begin feeding. The venom that paralyzed the caterpillars also keeps them alive for several days, long enough for the developing wasp to have a fresh and live supply of food while it develops. 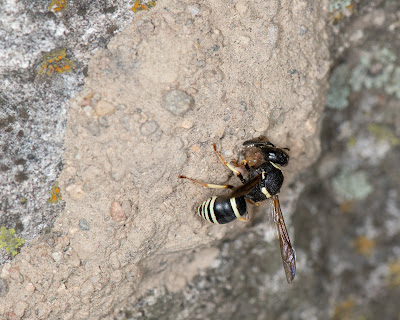 An Ancistrocerus waldenii female returns to her nest with a bolus of mud held clasped in her mandibles. She is adding an additional layer of mud over multiple fully provisioned cells.

An Ancistrocerus waldenii nest can have multiple mud cylinders/cells, constructed adjoining or on top of one another. After all of the cylinders are complete and provisioned with prey, the female adds an additional thick layer of mud over the entire nest to help seal it off from predators and help prevent the nest from breaking down before the wasps inside emerge as adults.

Here are a few tips for identifying Ancistrocerus waldenii females although if you find a similarly-constructed mud nest attached to a hard surface, that will help narrow down your identification to a few species. Wasps in the genus Ancistrocerus have a prominent transverse carina [ridge] on the base of their first abdominal segment (T1, for tergum one, the first visible dorsal plate). Ancistrocerus waldenii has white (less often yellow) markings. The female has a spot on the top of the sixth abdominal segment (T6) and complete apical bands on the first through fifth abdominal segments (T1 to T5). The female also has entirely black antennae (many mason wasps have yellow or white markings on the underside their antennal scape [first long segment of the antenna, nearest face]).

Be sure to visit Pollination Press, LLC, Heather's publisher, and shop for her books. Her book on wasps is a fine complement to my own; and who doesn't need another guide to native bees? Thank you, Heather, for agreeing to do this guest post.