One of the many fascinating aspects of the lives of solitary bees is that males will often come together, right now, over me…No, wait, that can’t be right. That would be the Beatles. Male solitary bees, however, frequently gather in “sleeping aggregations” where they spend the night, or rest during inclement weather.

Over the last few weeks I have been fortunate enough to witness a few of these low-key bachelor parties here in Tucson, Arizona. My walk home from work in the evening would reveal longhorned bees of the tribe Eucerini (family Apidae) bedding down atop desert marigolds. There were generally at least two per flower, 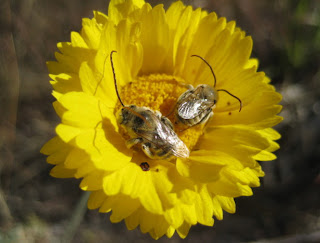 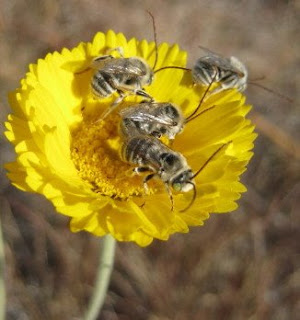 and occasionally one lone maverick. Only male longhorned bees have the long antennae that give this tribe its common name. Females have much shorter feelers.

You would think that being so exposed, the stingless males would be highly vulnerable to nocturnal predators, but this does not appear to be the case. Indeed, I often found them just beginning to stir the next morning.

A different kind of perch, and sleeping posture, is adopted by male cuckoo bees, Xeromelecta californica. Here, three individuals are clinging to twigs on a mesquite sapling. They are gripping the plant with only their jaws. That cannot be comfortable. I originally noticed only one member of this trio, in restless flight, seeking a better “bunk” to land on. They were also taking after the geriatric set, retiring early, at about four in the afternoon. One ultimately re-settled on the tip of a thorn. 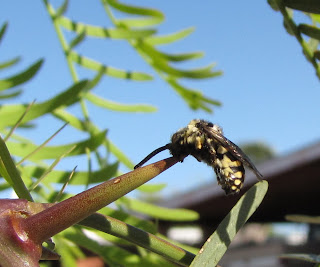 These social gatherings are very modest in size. I am hoping to capture images of much more spectacular events later in the year. Stay tuned for entries on sleeping wasps as well. For more on this and other odd bee-haviors, check out the Urban Bee Gardens website.