One of the most magical things about the Magic Wings Butterfly Conservatory and Gardens in South Deerfield, Massachusetts is how so many butterflies can manage to virtually disappear before your eyes. You have to be very observant just to find some of these masters of “crypsis,” another word for camouflage.

Butterflies are generally pretty obvious and colorful when they are flying or feeding at flowers. Those at rest, wings closed over their backs, are often colored in earthtones of browns, grays, or greens on the underside, making them so inconspicuous as to be easily overlooked altogether. Even an entire cluster of individuals, like these common crows, Euploea core, dangling from a vine, can be easily dismissed as dead, drooping leaves. 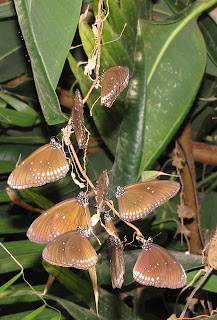 Native to India, crows are in the same family as our Monarch butterfly.

Some butterflies take hiding one step further by resting on the underside of leaves. This is also how butterflies shelter themselves from downpours and other inclement weather. Hanging beneath foliage in the butterfly house, this Malachite butterfly, Siproeta stelenes, easily avoided detection by visitors not accustomed to having to hunt for such beauties. 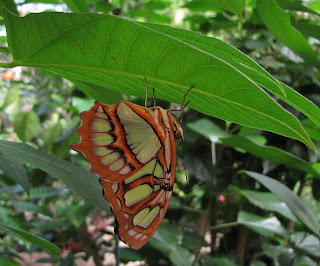 The neotropical Malachite actually makes its way into the U.S., occurring in extreme southern Florida and Texas as well as Central America and northern South America.

The ultimate in true camouflage is demonstrated by yet another butterfly known as the Indian leaf, Kallima paralekta, one of several tropical Old World species known collectively as “leafwings” or “dead leaf butterflies.” 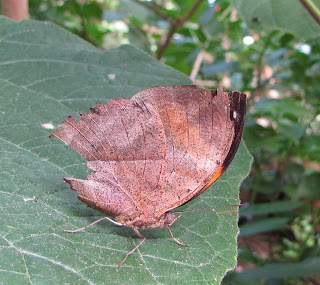 Not only are the closed wings of the insect shaped like a leaf in profile, but the markings on the underside even include a “midrib,” vaguely visible on this tattered specimen.

Magic Wings also displays some other insects that defy efforts to describe the extent of their cryptic appearance. Enormous tropical walkingstick insects of several varieties are so nearly invisible as to cause one to question whether there is anything other than plants inside the cage. 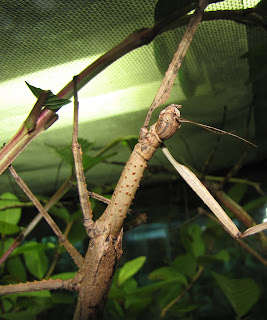 This close-up of one specimen confirms that this is indeed an animal rather than a vegetable, complete with a visible eye, antennae, and legs.

Walkingsticks still pale in comparison to their relatives the “walking leaf” insects of southeast Asia. Yes, the yellow object in this image is an insect, viewed from the side. 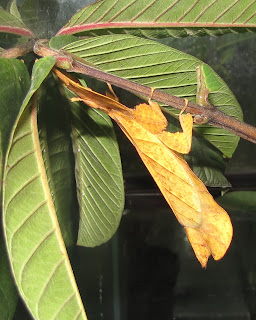 These members of the genus Phyllium seem to literally be what they eat, as they are vegetarians that consume the pigments of their host plants. Not surprisingly, in the autumn when leaves are losing chlorophyll and more colorful pigments that are normally masked come to the fore, the insects get a dose of bright oranges, yellows, and reds. Voila! The insect’s built-in fashion sense doesn’t miss a beat.