If there is one person in Tucson who has single-handedly made my life here a true joy, then it is Dr. Margarethe Brummermann. We met through that wonderful social network known as BugGuide, when she began posting insect images to that site. There is much more to Margarethe than just insects, though, and I have enjoyed learning about her former adventures while sharing in some of her new ones. 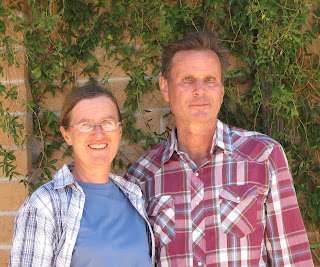 Margarethe actually lives just outside of Tucson, west and north of the city in Picture Rocks, on the other side of the Tucson Mountains. She lives in a very nice home with her husband, Randy, and a “pack” of five dogs: Montana (“Tana”), Cody, Leika, Frodo, and Bilbo (plus two cats, Boris and Natasha, named of course for the villainous duo in Rocky and Bullwinkle). 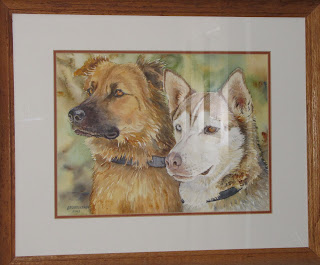 They have neighbors, but houses here are widely scattered by city standards, and there is lots of space around their residence. Plus, they are adjacent to state rangelands where cattle graze, coyotes roam, and rattlesnakes are common. It is an austere but scenic landscape, save for a vast mountain of rubble from the nearby quarry.

Indoors, Margarethe’s passions are evident in every room in the house. While she has degrees in zoology and vertebrate physiology, she is also an accomplished and popular artist. Working mostly in watercolor, she paints everything from pets to western life and landscapes. She erects a booth in several outdoor art shows and festivals each year, and her work also hangs in local galleries. She has also done commissioned work. 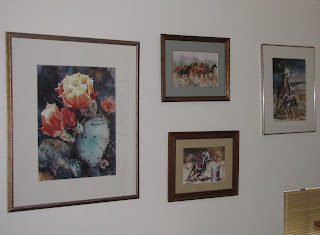 The last couple of years, Margarethe has created a new project for herself: documenting in digital images the many colorful and unique beetles of Arizona. She shoots images in the field, but also brings specimens home to photograph on a clean white background to bring out the finer details and truer colors of her subjects. Her intention is to publish a “coffee table book” with plates of her images and a brief explanatory text. She has already had interest from publishers; and her latest count is over 800 species of Coleoptera she has imaged.

German by birth, Margarethe has traveled the world and done field research on a wide array of animals. Her stories are vivid and entertaining, as well as educational, and she shares them freely when we take day trips together out of town. She is not above poking fun at me, too, but she’s endlessly patient with my quirks and tolerant and forgiving of my sometimes irresponsibly slower pace in the field.

One of the many joys we have is introducing each other to other entomologists, insect enthusiasts, and wildlife photographers here in Arizona. We often go together to gatherings like the annual “Beetle Bash” hosted by Fred and Carol Skillman at their home in the Dragoon Mountains; and Pat Sullivan and Lisa Lee in Sierra Vista who have recently started holding an annual “Infestation” of entomologists at their own residence.

I can honestly say that my life would be a great deal poorer for not knowing Margarethe and Randy, and certainly a lot duller without our regular excursions away from the city and into the lovely canyons and mountains. Scenic landscapes, incredible fauna and flora, and great company: Who could ask for more? Thank you, Margarethe!

NOTE: You will want to follow Margarethe’s adventures, observations, and passions for yourself at her new blog, Arizona: Beetles, Bugs, Birds and More.