One of the ways I use field guides is to look at the range maps to find out what species occur in the area I am currently living, or the place I am about to visit. This habit usually leaves me with unfulfilled objectives as it is not always possible to find species I want to see. Such was the case of the “Green Fool Grasshopper,” Acrolophitus hirtipes, until Sunday, July 14. 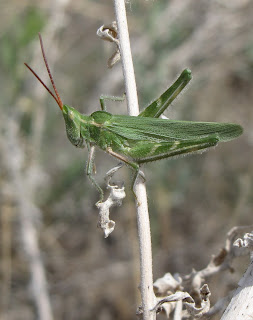 I had expected to see this odd, handsome acridid last year, especially since one of the plants it associates with is Mentzelia decapetala, the Giant Blazingstar, a common weed in a degraded shortgrass prairie just up the street and over the hill from my Colorado Springs townhouse. I did not see a single one last year despite the abundance of the flowering plant.

This year, Mentzelia has been slower to grow, as have many of the plants around here. Even yucca flowered sparingly. Surprisingly, I encountered four specimens of the grasshopper, and managed images of two: one female, then one male. I suspect I am on the front end of their life cycle, and that I will see more adults in the coming weeks. At least I hope so. 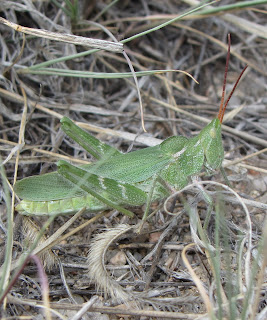 I admit I am a fool for grasshoppers, as their diversity is so great here in the western U.S. I have now seen twenty-seven species in Colorado Springs alone, in a little under two years. There is great variety in color and form even within a single species, as many local populations have their own camouflage pattern to match the surrounding soil and vegetation in which they dwell.

Acrolophitus hirtipes is a pretty consistent grass green color throughout, with a few white (or even pinkish) markings and long, brick-red antennae atop a pointy head. Southern populations tend to also have darker green spots and blotches. The crest on the pronotum (dorsal part of thorax) is diagnostic. The hind wings are pale, dull yellow with a contrasting dark band. Despite the banded wings, this is one of the slant-faced grasshoppers. I was surprised to learn from my images just how hairy this species is, perhaps an adaptation to help insulate it from the extreme heat of the summers here. Temperatures on the ground easily exceed 100° F on really hot days. These are pretty large insects, too, males measuring 25-42 millimeters, females 32-51 millimeters. 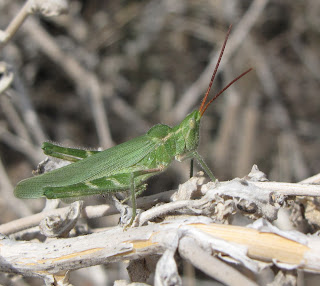 The Green Fool Grasshopper is a denizen of grasslands and prairies from the southern Prairie Provinces of Canada south to extreme northeast Mexico. It occupies a reasonably narrow band from the Rocky Mountains east to the western Dakotas, Nebraska, Kansas, Oklahoma, and Texas.

This grasshopper may live in shortgrass prairies, but it dines on broadleaved plants like the above-mentioned Mentzelia. Other known items on its menu include Condalia (“snakewood” in the buckthorn family of shrubs), Filago (“cudweed” or “cottonrose” in the sunflower family), Nama (plants in the Boraginaceae), and Phaecelia (“scorpionweed,” “heliotrope,” also in the Boraginaceae). 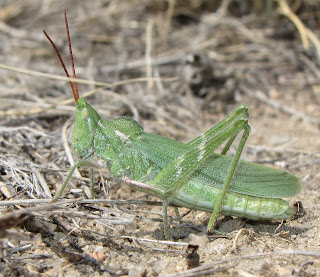 The life cycle of this species begins when eggs laid the previous year hatch in early spring, or even late winter. Nymphs mature quickly and the adult insects may be present in late spring and early summer. We had late frosts here along the Front Range this year, which has translated into many species maturing later than normal. Only recently have we had substantial rains to perk up the vegetation that grasshoppers feed on.

Surprisingly, the images I obtained yesterday will constitute a Colorado state record for Bugguide.net, the online standard for recent records of arthropods in North America. It just goes to show that you cannot assume that you cannot have an impact as an “amateur” naturalist or entomologist. Please go out there and seek. Ye shall find some amazing animals. 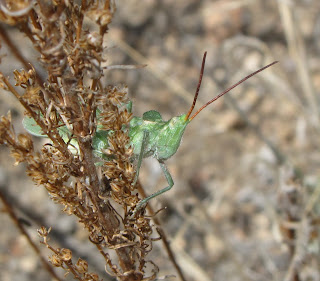