Last month we celebrated "Arachtober" over on the Flickr photo-sharing website, but with the unseasonably warm weather we have had here at home along the Front Range in Colorado, we're still seeing plenty of spiders this first week of November. Ok, we also cheated a little and took a trip into the heart of New Mexico, but it all goes to reveal how surprisingly long-lived some arachnids can be, and their different strategies for surviving the winter. 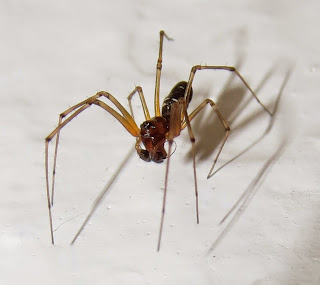 Fall is the time when the males of many a spider species go wandering in search of mates. So, it was not surprising to find a male "platform spider," genus Microlinyphia, in a restroom on the Bosque del Apache National Wildlife Refuge in New Mexico last Monday. I found out that the genus is easily recognized by the circular filament seen in the image above that issues from the male's pedipalp. This hair-like structure is called the "embolus," and it is the channel through which sperm travels during mating. 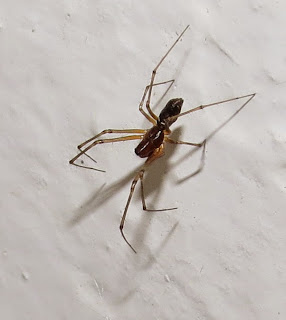 another view of the Microlinyphia platform spider

Female and immature male platform spiders live on flat, sheet-like webs built close to the ground amid grasses and low plants. The spider clings upside down to the underside of the web. Morning dew can make the webs much more obvious than they normally are.

Once mated, a female spider usually produces one or more egg sacs, as this labyrinth spider, Metepeira sp., has done. She has two egg sacs behind her in the image below, inside the tubular retreat she is at the mouth of. We found her near the platform spider, but outside along a railing around the "Flight Deck" at the refuge. Labyrinth spiders build a combination orb web and tangled snare. 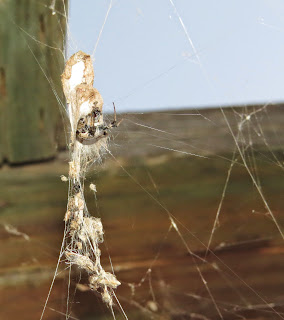 Labyrinth spider with egg sacs behind her

The egg stage is a great way for an embryo or spiderling to spend the cold months, insulated within layers of silk spun by their mother. The eggs often hatch within the package, the spiderlings biding their time until the weather becomes favorable for their emergence. 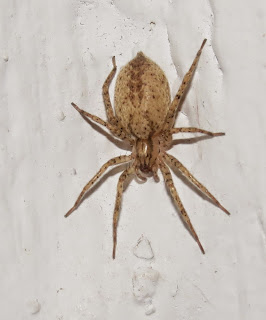 At the bed-and-breakfast inn where we stayed in New Mexico, I found what must be a very pregnant female ghost spider, family Anyphaenidae, prowling the exterior of the house at night. Back home in Colorado Springs, before we left on vacation, I spotted a similarly bloated female jumping spider, Phidippus asotus on the downspout right outside our townhouse. 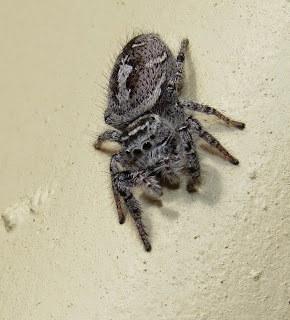 Inside the bed-and-breakfast, a pair of male cellar spiders in the genus Physocyclus were hanging around the web of a female in a corner of the ceiling. Below is one of the males approaching the female. Physocyclus seems to replace the Long-bodied Cellar Spider (Pholcus phalangioides) as the usual "indoor" cellar spider in the southwest U.S. 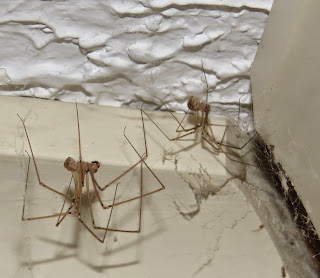 It is not only spiders that are out and about, but also harvestmen, appropriately-named arachnids for their season of abundance. You may know them as "daddy long-legs," but that name is widely applied to cellar spiders, even crane flies (in England at least). The one shown below is likely Phalangium opilio, a much-studied species native to Europe but now found all over the globe. They can survive the winter as eggs, adults, or immature specimens. 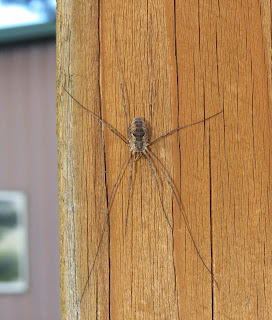 Harvestman: not a spider but still an arachnid

Fall is apparently also a time when young spiders disperse through "ballooning." I will eventually devote an entire post to this phenomenon, but it involves the spiders climbing up vertical objects. Consequently, you can reliably find spiders atop fence posts, mailboxes, utility boxes (for cables, electrical, phone), as they try and catch the wind and literally fly off to greener pastures. Crab spiders and wolf spiders in particular seem to be doing this right now. The little wolf spider below parachuted onto our car at Bosque del Apache in New Mexico. 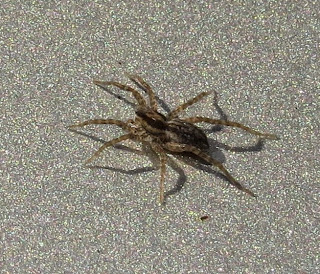 Just the other day (Friday), I found a young running crab spider, Thanatus sp., on a utility box here in Colorado Springs..... 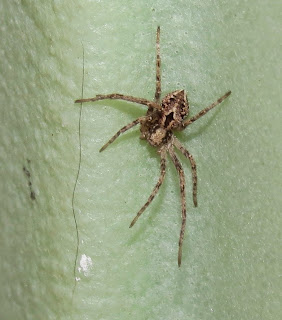 followed by a ground crab spider, Xysticus sp., on top of a "stucco" mailbox post. Both seemed intent on ballooning, especially the Xysticus, which stood on tiptoe (tip-tarsus?) every time a slight breeze came up. 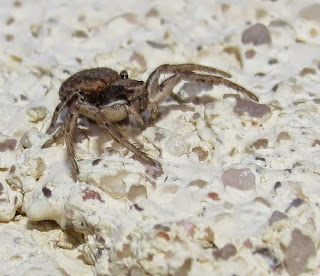 Finally, inside our very townhouse, Heidi discovered a female funnelweb weaver, Hololena sp., in her web atop our fireplace mantle. 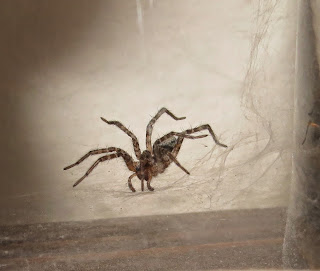 We welcome our arachnid friends, even indoors, to help dispatch pesky flies and other insects that we don't appreciate nearly as much. We hope that your own holiday spirit of friendliness likewise extends to spiders, harvestmen, and related critters, even if it means you gently "relocate" them back outdoors.