Tree crickets, genus Oecanthus, are having quite the year here along the Colorado Front Range. Last month I went to Garden of the Gods park in Colorado Springs and could hardly go twenty feet without hearing a male tree cricket singing in the tall weeds or from a yucca blade. I even managed to capture videos of their singing and courtship. 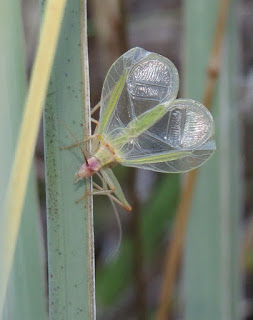 It is much easier to tell which gender is which. Females are very slender, with the front pair of wings hugging the body tightly. The short, stout ovipositor, used to insert eggs into berry canes and other plant stems, is easily visible. 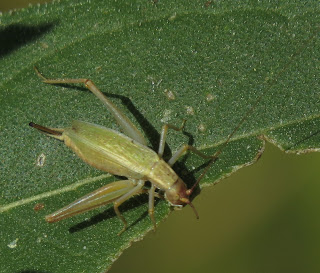 Males on the other hand have the front wings greatly expanded into paddle-shaped musical instruments that make them look more like green lacewings than crickets. The intricate pattern of veins is all about lending support to the membrane that generates, amplifies, and projects the male's song. He lifts his wings into a heart shape at a 90-degree angle to his body in order to sing.

The song is produced when a "scraper" on one wing is drawn across a "file" on the other wing, near where the wings join the thorax. The rapidity with which this happens cannot be captured by ordinary video cameras. Some male tree crickets align their wings with gaps in foliage, or even chew holes in leaves, to reduce acoustic interference and further intensify their call. 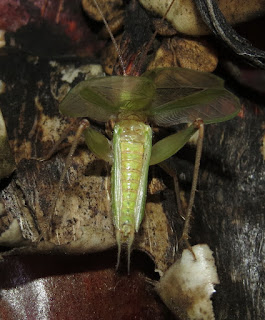 Like most crickets and other members of the order Orthoptera (grasshoppers, katydids, crickets), males have more than one kind of song. Once a male successfully lures a female, he switches to a softer song to help her orient to him. His raised front wings also expose a metanotal gland in the center of his thorax, which secretes a substance that the female feeds on. This is something of a distraction so that he can transfer a spermatophore, or "sperm packet" to her genital opening. The packet appears as a small, pearly blob near the tip of her abdomen in the video and images below.

The spermatophore takes time to drain sperm into her oviduct, and the female would undoubtedly eat it if she did not have the more attractive metanotal secretion to lick instead. She is sufficiently addicted that she feeds for several minutes after mating. 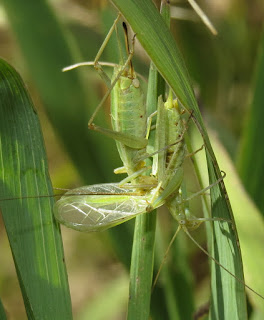 Tree crickets are omnivores, feeding on plants and small insects like aphids. Some species are truly arboreal, living in shrubs or high in trees, but a surprising diversity can be found in grassy fields, meadows, and similar habitats. 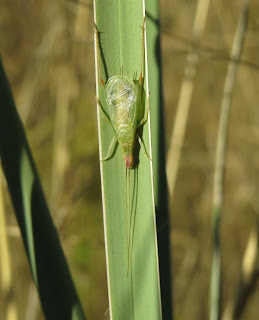 There are many wonderful online resources to help you appreciate and identify tree crickets. One of the best is Singing Insects of North America, which covers grasshoppers, katydids, and cicadas along with crickets. Oecanthinae.com was created by Nancy Collins, a citizen scientist who has become a leading authority on tree crickets, even discovering a species new to science. Lisa Rainsong writes and illustrates the blog "Listening in Nature," which covers all kinds of acoustic phenomenon in the outdoors.

Enjoy listening to, and looking for, tree crickets in your own neighborhood. Finding them is a challenge, but your patience will be rewarded. Above all, have fun.