It is the season for sharing, and eating, and if you throw the cooking and table scraps onto the compost heap you are providing a wonderful feast for a variety of insects as well. A recent visit to my in-laws in Illinois, across the Mississippi River from St. Louis, allowed me to discover a multitude of insects over the Thanksgiving holiday, thanks to their compost enclosure. 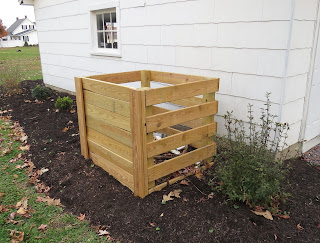 Having insect activity in your compost is a good thing. It means you have a healthy mini-ecosystem that includes decomposers which break down decaying organic matter into nutrient-rich natural fertilizer. Thus, the vegetable scraps from this year's harvest go on to feed next season's crops. Decomposers are more properly known to scientists as saprophytes, and they often require microorganisms and/or fungi to take full advantage of rotting organic debris. 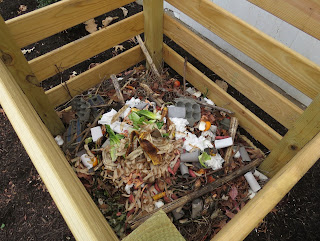 Look at this yummy buffet!

I did not go digging into the already, uh....fragrant pile of material, but had I done so I certainly would have uncovered a host of invertebrates like springtails, insect larvae, millipedes, maybe woodlice, earthworms, and snails or slugs. Besides food, a compost heap offers insulation from cold weather, and even warmth given off in the process of decomposition. 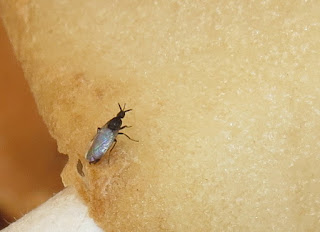 Instead of digging and turning, I merely watched for insects appearing on the surface of the pile, or on the walls of the enclosure. These were mostly adult insects, especially flies, the larvae of which are the ones doing the work of decomposition. Chief among these were minute black scavenger flies, Coboldia fuscipes, in the family Scatopsidae. They are only 2-3 millimeters in body length, and can be mistaken for other flies of similar size. 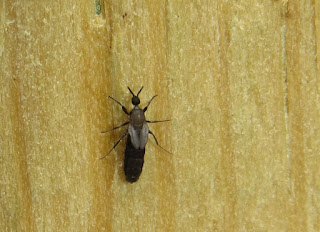 I found a fair number that had just emerged from the pupal stage, with their wings in a rudimentary state awaiting full inflation. Their larvae feed in the mycelia of mushrooms, or on decaying fungal, plant, or animal tissue. 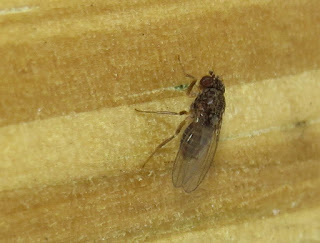 The next most abundant flies were pomace flies in the family Drosophilidae. Most people call them "fruit flies" because these are the tiny flies that hover around the overripe bananas on your kitchen counter. Indeed, they are drawn to fermenting matter where the females lay their eggs. The larvae feed mostly on the yeasts that invariably attach decaying sugars in fruits and vegetables. 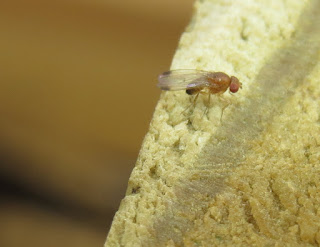 What was a little surprising was that the common pomace fly species was an exotic one: the Spotted-winged Drosophila, Drosophila suzukii. The males of this species of east Asian origin have an obvious dark spot near the tip of each wing. This fly started appearing in the northeast U.S. in 2011, and has since been recorded over most of the eastern half of the U.S. It is a known pest of a variety of fruits and berries, so it may be one of the few "bad guys" to be seen on your compost pile. 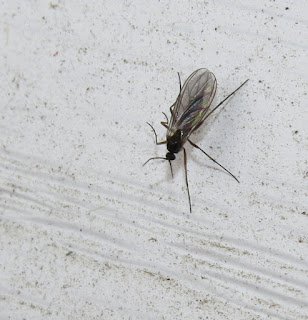 Dark-winged fungus gnats, family Sciaridae, are abundant pretty much year round, even indoors where the larvae flourish in the soil of overwatered houseplants, feeding on roots and fungi. They are only slightly larger on average than the minute black scavenger flies. 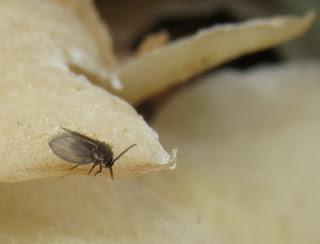 Also present were moth flies in the family Psychodidae. You are probably familiar with their indoor relatives, the "drain flies" that you often see perched like tiny fuzzballs on the bathroom wall or sink basin. The larvae of moth flies enjoy eating algae, bacteria, and fungi, especially if it is exceedingly wet or sludge-like. Yum. 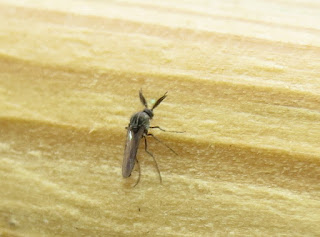 Another surprise was to find an adult biting midge, probably in the genus Forcipomyia, or closely-related. Males of these tiny flies have fairly unique, bushy antennae. Depending on the species, the adult females may bite birds or mammals, or suck the blood of moths, dragonflies, and other large insects. Meanwhile, the larvae feed on algae, plant debris, or fungi. 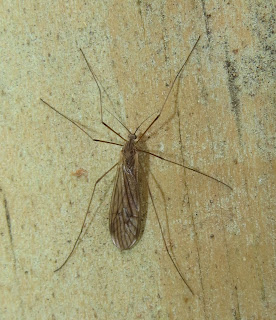 The largest fly I found was a winter crane fly, genus Trichocera (family Trichoceridae). It turns out the larvae of these slender, long-legged flies are scavengers on decaying leaves, vegetables, dung, fungi, and material found in rodent burrows. A few are even pests of stored tubers in your root cellar. You do have a root cellar, right? 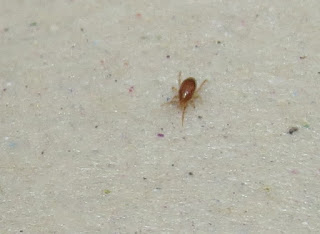 The vegetarian "bugs" also attract carnivores in the form of predatory and parasitic insects, and mites. I spotted one mite that made a cameo appearance near another insect I was photographing, but mites are typically among the most numerous of all soil-inhabiting animals. Next in line might be ants. 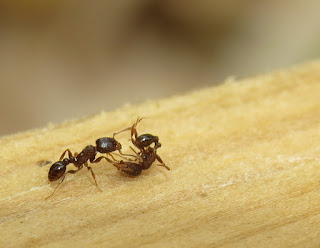 I found two species of ants in and around the compost heap. Ants are difficult to identify without putting them under a microscope, but I am pretty sure these were the Japanese Pavement Ant, Tetramorium tsushimae, an Asian introduction now common around the St. Louis area and adjacent Illinois; and the Odorous House Ant, Tapinoma sessile. 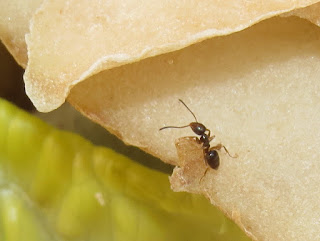 The Odorous House Ant is more of a scavenger than a predator, so it is likely to be seeking meat scraps and/or dead insects as sources of protein and fats. It is also fond of sweets.

I saw what I initially mistook for another species of ant, but it became quickly apparent it was a wingless female wasp. The ovipositor (egg-laying organ) protruding from its abdomen betrayed it as a female ichneumon wasp in the genus Gelis. So interesting is this one that you will have to wait for a separate post about it alone. Sorry! 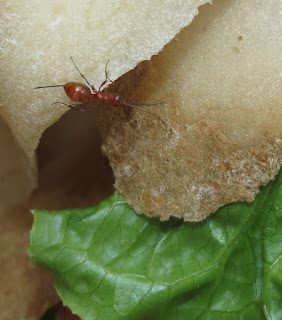 Another wasp, this one fully winged, was crawling around the perimeter of the top of the wood enclosure. At this time I am unsure if it has any relationship with the compost, or is merely something that blew into the area and became too cold to fly off. I await a proper identification and will supply update this post when I have one. 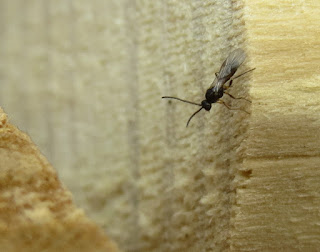 The benefits of composting to your yard and garden should be obvious, but look at what you are feeding in the meantime: an entire biosphere in miniature, pretty much. Just remember that if you're hungry, they're hungry. Bring them inside. Wait, that's not how it goes....