Please do not let the title of this post intimidate you. This would be a typical title for a paper in a scientific journal, but I promise to keep the language understandable, lively, and captivating. I also hope that you will be more likely to visit scholarly publications to learn more about the insect or arachnid subjects that interest you. 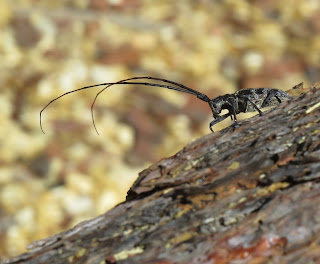 I had the good fortune of stumbling upon a small sawmill in Black Forest, northeast of Colorado Springs, in June of 2016. The property owners, perhaps begrudgingly, gave me permission to look for insects in the stacks of Ponderosa Pine logs there, and it proved to be a "Beetle Bonanza." I visited on several occasions and found scores of jewel beetles (Buprestidae), longhorned beetle (Cerambycidae), checkered beetles (Cleridae), and a few bark beetles (Curculionidae: Scolytinae).

Among the more abundant species among the logs was the White-spotted Sawyer, Monochamus scutellatus. These are fairly large insects, 15-27 millimeters in body length, and members of the longhorned woodborer beetle family. The long "horns" refer to the antennae of these beetles. Males have antennae that may be twice the length of their bodies or even longer. The front pair of legs is also longer than in the females, and the front tarsi ("feet") are expanded to better grip the female during mating. 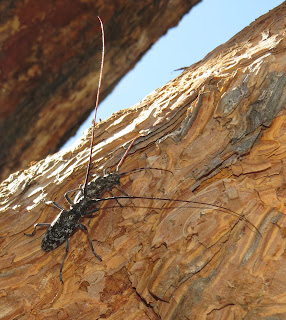 What I observed in one pair of sawyers prompted me to read about the mating behavior of the species, if only to confirm my hypothesis that the male guards the female he has mated with to prevent rival males from usurping his genetic investment in her offspring. It turns out there is even more to the story than I imagined, and I hope to observe those other behaviors at some point, too.

White-spotted Sawyers breed in dead, dying, injured, fire-scorched, or recently-felled pines, true firs, and Douglas fir, and spruce. Such resources are rather scarce in a forested landscape, so it pays males to stake them out with the understanding that eventually females will visit in order to lay their eggs (oviposit). Surprisingly, the males emit a pheromone that draws additional males to an oviposition site. The airborne chemical cue is called an "aggregation pheromone." Despite their size and ungainly antennae and legs, sawyers are accomplished fliers and easily make their way to the source of the pheromone. 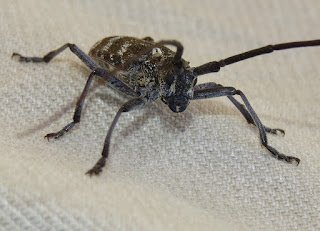 Once there, the largest males with the longest antennae may square off in one-on-one duels for possession of the oviposition resource, which is the area of the tree trunk with greatest circumference. They lash at each other with their oversized antennae, and may grapple by locking their jaws and biting. Smaller males generally back off, giving way to larger rivals based on antenna-length alone. The dominant male mates with incoming females that may then disperse to lay their eggs. This is not what I observed, but the reference I am reading goes on to describe what I did record. 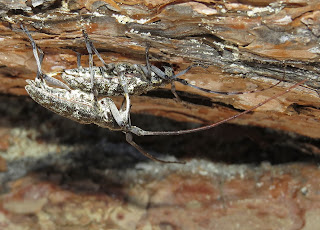 I witnessed copulation between a male and female M. scutellatus, during which time the female was "multi-tasking," chewing a small cavity in the bark. At the conclusion of mating, the female turned around to deposit at least one egg in that cavity while the male continued to grasp her in a loose but protective embrace. She then turned again and appeared to resume chewing the bark cavity, but perhaps she was grinding sawdust to cover her egg. 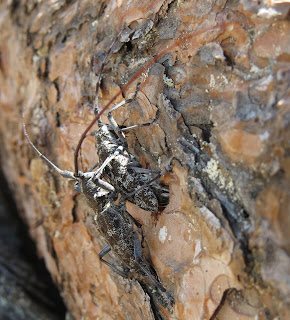 Female ovipositing while male guards her

Fret not about the smaller male beetles, they may achieve mating success by protecting a less optimal tree bole; and they may profit from the expensive production of aggregation pheromone by other males. Smaller males are usually more agile and vigorous than their larger conspecifics.

The entire life cycle of the White-spotted Sawyer takes from one to two years as the larva that hatches from the egg bores first under the bark, then tunnels deep into the wood, sometimes reaching the heartwood. It eventually pupates in a cell near the surface, metamorphosing from a larva into an adult beetle. Once it leaves the pupa, it remains in the pupal cavity while its new exoskeleton hardens. It then chews its way to freedom, a journey that is clearly audible to the human ear. 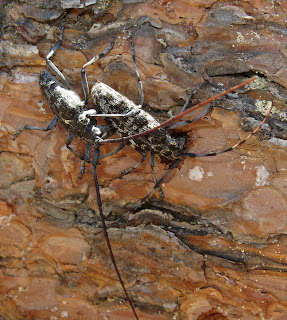 It is important to note that this species, like the overwhelming majority of other longhorned beetles, is not a forest pest. Yes, it can negatively impact logs in situations like the sawmill, before they are cut, but they do not kill living trees outright like the invasive Asian Longhorned Beetle, Anoplophora glabripennis. Sawyers are an important and charismatic part of the invertebrate fauna in coniferous forests across Canada and the northern U.S., and major mountain ranges farther south.