NOTE:Today's post is an update of a previous post on November 11, 2012, prompted by a surprising recent find in our own back yard, on June 22, here in Leavenworth, Kansas, USA. I habitually tour our property looking for insects, spiders, and other invertebrates, and almost dismissed a brown, thorn-studded object as a piece of plant debris that had become adhered to our siding. Fortunately, I had seen other individual Star-bellied Orbweavers previously, though none of them nearly as large as this one.The hard, spiked abdomen of this adult female was nearly the size of a dime. 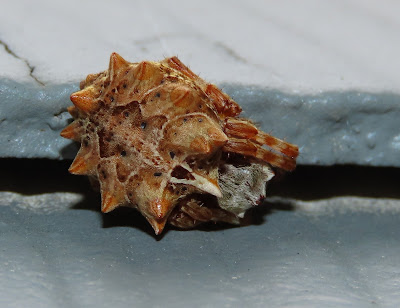 There is no shortage of the weird in the spider world, and this animal is a stunning example. One of my friends on the photo-sharing site Flickr asked "Why is it 'star-bellied' when it's star-butted? Is there more star-ness on its belly?" Fair question, to which I have no answer. Maybe the person that first saw one described it from the ventral side. The pointy tubercles certainly show up from all angles. The spikes enhance its camouflage as it passes itself off as a bur, seed pod, or bit of dried vegetation. 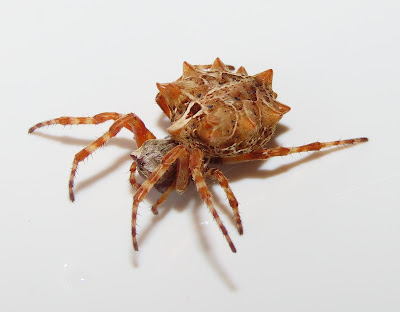 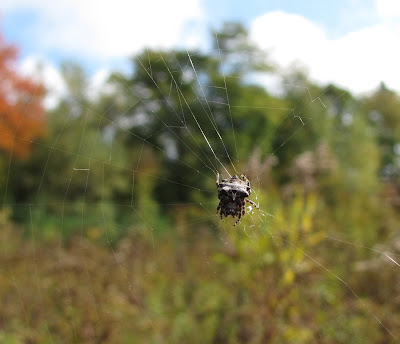 An immature spider in its web in western Massachusetts

These are not large spiders. Mature females measure 7-15 millimeters in body length, males 5-8 millimeters. Their unique appearance may make them easy to identify, but quite difficult to find, unless they are sitting in the hub of their web, which they don't seem to do with dependable regularity. Couple their cryptic shape with the fact that they tend to build their circular snares less than three feet off the ground in prairies, fields, meadows, and forest openings, and it can be an exercise in futility to hunt them amid tall grasses. Should one degtect your approach, it will drop to the ground, fein death, and disappear in the tangle of vegetation. 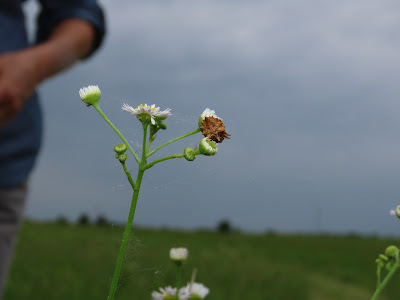 Can you spot the spider at Thoh-Dah Prairie in Missouri?

Star-bellied spiderlings emerge from egg sacs in summer, and overwinter as immature or penultimate (one molt removed from adulthood) individuals. Adult females can be found from May to October, at least in Illinois (Moulder, 1992). Mature males can be seen from May to September. I have found near-adults in odd places, probably as a result of "ballooning." Ballooning is a dispersal strategy used by many young spiders to travel afar and stake out their own territories. A spiderling typically climbs up to the summit of a tall object, stands on tiptoe ("tip tarsus??"), and issues long strands of silk from its spinnerets. These threads are caught by the wind, and when the spider lets go it may be blown hundreds of feet, if not a mile or more. One baby A. stellata was captured at 1000 feet in the air over Tallulah, Louisiana, on December 13, 1930 (Fitch, 1963). 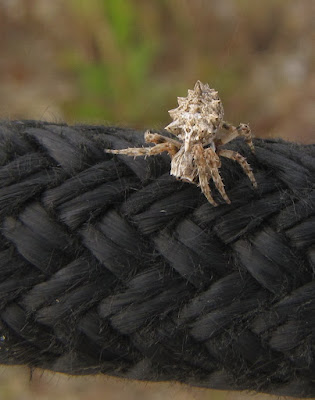 This little one has ballooned onto the beach at Cape May, New Jersey

Once settled, these spiders spin the characteristic orb web to snare insects, mostly immature grasshoppers. There is one record of an adult female preaying upon an American Green Tree Frog, Hyla cinerea, but this is certainly not a routine event (Lockley, 1990). 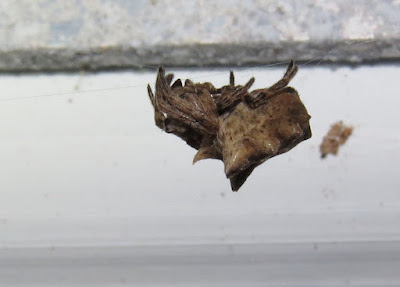 An adult at night in Broken Bow, Oklahoma

Star-bellied Orbweaver is not immune to predators itself. The Black and Yellow Mud Dauber, Sceliphron caementarium, is a parasitoid wasp that stings spiders into paralysis and stockpiles them in mud cells as food for a single larval wasp in each cell. The wasps are undeterred by a hard-bodied spider. 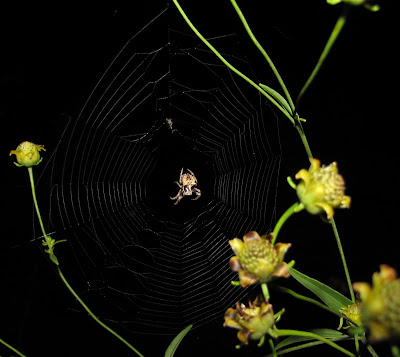 Subadult spider in its web at night in Adams County, Ohio

You may have better luck finding the Star-bellied Orbweaver at night. Many species of orbweavers that are in hiding by day move to the hub (center) of their webs after dark. Taking a night hike reveals another world anyway, nocturnal spiders being among the impressive highlights. 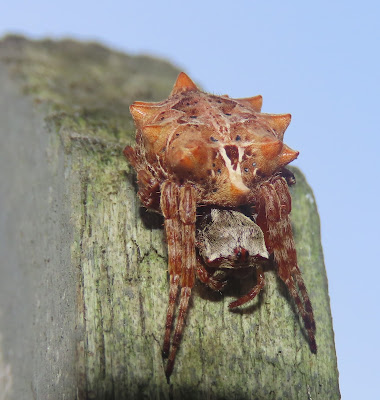