Working on the internet for your job means that occasionally the server crashes. That is what happened in the early afternoon of Wednesday, March 11. Resuscitation of the network was not going to happen any time soon, so we were sent home early. This turned out to be a good thing, as the leisurely walk home on this sunny afternoon afforded opportunities to see what other insects are in the neighborhood now.

Even a little water goes a long way in the desert. I found this little checkered skipper, genus Pyrgus refreshing itself at a curbside puddle from the discarded part of a swamp cooler. 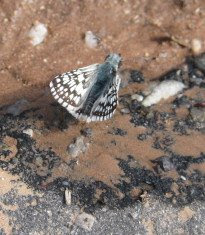 The creosote bushes are still blooming full throttle, and the bees love it. I took a string of what I thought were eight or ten great shots of this female Valley carpenter bee, Xylocopa varipuncta, but only this one image was even remotely worthy of this blog! 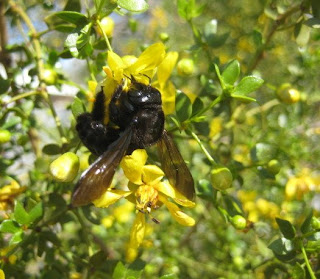 Interestingly, males of this species are entirely bright golden brown in color. They are not as common as the girls, though.

The creosotes also sport old galls, making it look like the branch sprouted a pom-pom. 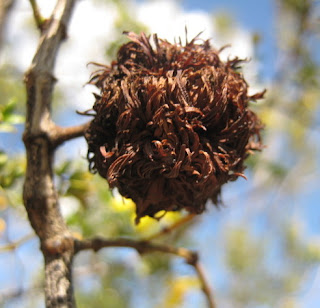 Go-o-o-o-o creosote! The abnormal growths are stimulated by the egg-laying activities of a tiny fly called a gall midge. The species in this case is Asphondylia auripila. The female’s larval offspring are thus sheltered and fed inside the profusion of tissue generated by the plant.

This is also the season for other young insects. The pallid-winged grasshopper, Trimerotropis pallidipennis, goes through “incomplete metamorphosis,” simply growing larger with each molt, finally attaining a full set of wings and reaching sexual maturity as an adult. One thing that remains constant, however, is the nearly perfect camouflage of this insect. Nymphs like this one are barely discernable among the pebbles and dry patches of soil. 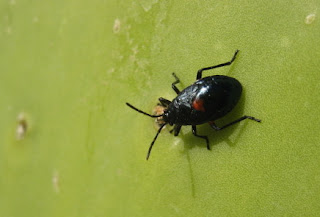 This little one was on the pad of a spineless ornamental prickly pear cactus. These nymphs sport a metallic blue-black wardrobe accented by a scarlet dot in the center of the back. I wish I could find such dynamic and fashionable apparel.