On the way to visit Pat Sullivan and Lisa Lee in Sierra Vista (see “Bug Rooms”), Margarethe Brummermann and I stopped to explore a mesquite grassland habitat just off of Arizona State Route 83, about two miles south of its intersection with Interstate 10. The weather this day, March 7, was rather cool and blustery, albeit mostly sunny. The wind made finding insects and other arthropods something of a challenge.

The flora alone is quite spectacular, however. Take this yucca for example 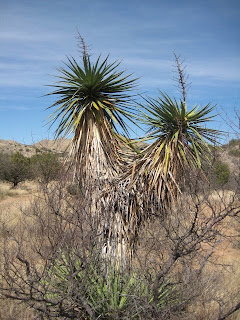 The mesquites themselves were looking a bit gnarly, having suffered through a population explosion of “twig girdlers,” Oncideres rhodosticta. These are longhorned beetles in the family Cerambycidae. A female cuts a notch around the entire circumference of a twig, effectively killing the wood beyond the girdle. She then lays an egg in that doomed twig, and the larva that hatches bores inside. 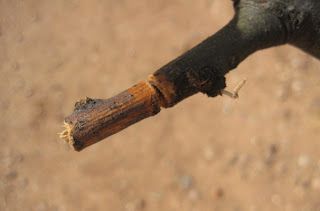 In this image, one can see both a girdle, and the broken end of the limb that resulted from a second girdle.

Many fishhook barrel cacti like this one were scattered among the mesquites. 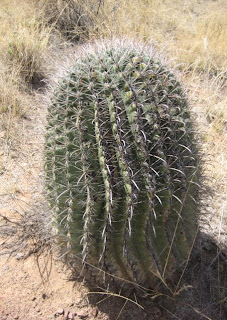 Careful inspection (VERY careful inspection) revealed that many of the folds in the succulent plant were occupied by leaf-footed bugs in the family Coreidae. Members of the genus Narnia were too quick and easily evaded my camera. Adult Chelinidea vittiger, or “opuntia bugs” were more cooperative. 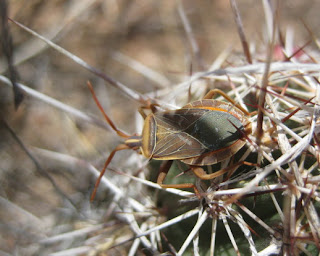 The soil that supports this plant community is very rocky, and turning over some of the larger stones revealed a handful of hidden arthropods. The most spectacular was this centipede, Scolopendra polymorpha. At only about three inches long, it was far from a full-grown adult specimen. 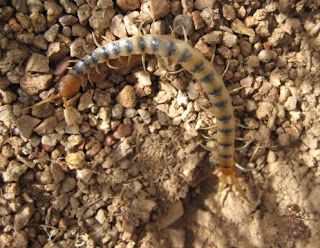 They are certainly formidable, agile predators at any size. The cool temperature was the only reason this image did not turn out as a motion blur.

I recommend visiting this unique habitat to any naturalist interested in exploring the many faces of the Sonoran Desert. It holds many secrets at any time of the year.