One of the great joys of entomology is getting to know other entomologists and their families. I was happily surprised to get a phone call from George “Jeff” Boettner recently, informing me that he and his wife were in Tucson to visit an in-law. Purely by chance, Jeff had met another friend of mine, Philip Kline, atop a butte on the edge of town. Philip mentioned that I lived in the city below, and suggested to Jeff that he look me up. 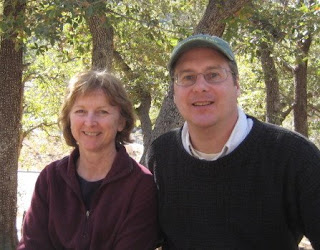 Jeff is a first-rate research entomologist at the University of Massachusetts where he studies tachinid flies and their hosts. His work has revealed startling evidence that exotic tachinids imported to combat invasive species like the gypsy moth have made a significant and terrible impact on both our native moths and our native species of tachinids. So effective are these introduced “generalist” tachinids that they outcompete the natives for hosts, driving them to extremely low population levels. Some endemic tachinid species may even be extinct, at least north of the Mason-Dixon line.

Cynthia, Jeff’s wife, is a fine biologist in her own right, and is the Coordinator of the Invasive Plant Control Initiative at the Silvio O. Conte National Fish & Wildlife Refuge. She also helped found the New England Invasive Plant Group (NIPGro for those who like acronyms). This year she and Jeff will celebrate their twenty-ninth (29th!) wedding anniversary. They complement each other wonderfully, and are great company over dinner and in the field, as I came to find out last Thursday evening and Friday. Thank you, Jeff and Cynthia, for a terrific time at the Blue Willow and in Madera Canyon.