I have been almost literally wading through vials of dead spiders in my lab at the University of Massachusetts (Amherst) the last few weeks. My supervisors had tried to come to terms with a real arachnologist in Canada to identify the pitfall trap specimens from last year’s samples, but apparently international relations were too complicated and it fell to me to try and make heads and tails (cephalothoraxes and spinnerets?) of the many members of the order Araneae that were trapped last summer.

The chemicals and processes used in collecting, cleaning, and preserving the specimens often leaves them in less than optimal condition for identifying them later on, and the biggest challenge I’ve had has been finding intact specimens, or at least assembling all the parts scattered throughout a given vial. Legless specimens abound, as do those without abdomens.

Another problem one encounters is finding mature adult specimens. Many specimens can be determined to the family level of classification as immatures, or even spiderlings, but genera and species can be impossible to conclude without having the external genitalia to examine. The majority of specimens I find to be juveniles or “penultimate adults,” the term for spiders one molt removed from adulthood. Arg!

Still, I am learning a great deal about spider anatomy and am able to execute identifications to a respectable degree despite the obstacles. I have at my disposal several fine literature references as well as excellent online resources. Ultimately, I must rely on patiently putting the specimens through “keys,” documents in the form of couplets that direct you to other couplets and eventually take you to the name of a genus or species. When it works, it is a joyous occasion. 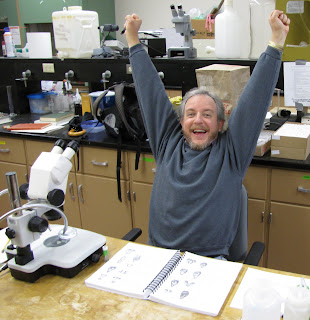 More often than I’d like, though, the result is one of sheer frustration. 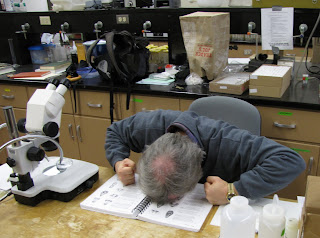 The diversity of the spider fauna that I’m finding is truly amazing. Among the more dominant families are the Linyphiidae, which includes the tiny “dwarf spiders,” subfamily Erigoninae. There seems to be no end to the number of different species, and some of them sport bizarre formations on the cephalothorax . Males of Oedothorax trilobatus sport tumor-like swellings that give the species its name. 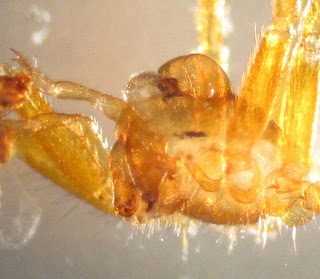 Meanwhile, some males of Walckenaeria communis can have a horn-like extension of the cephalothorax. The spiders themselves measure only about two millimeters in total body length.

At the other end of the spectrum are relative monsters like Wadotes hybridus, a member of the hacklemesh weaver family Amaurobiidae that can reach 14 millimeters at maturity. 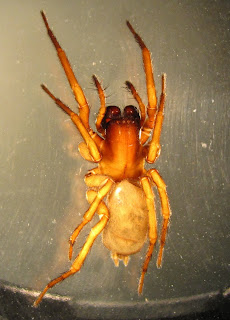 These are powerful, brutish arachnids with heavy legs and enormous chelicerae (jaws).

You can see some of the other strange and wonderful species I’m identifying and imaging by following my string of images at Bugguide.net, which start with the most recent uploads. Live vicariously in arachnid land.