Indoor Insects of Autumn (part 4 of 4)

This is the final installment of a four-part series addressing insects frequently seen indoors at this time of year when they seek shelter for hibernation during the colder months. This entry will introduce the “multicolored Asian lady beetle,” Harmonia axyridis. 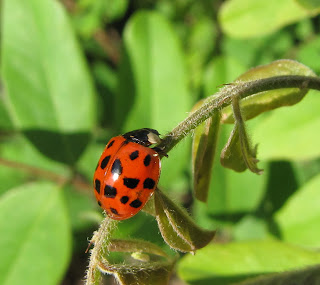 Like the brown marmorated stink bug, the multicolored Asian lady beetle, also known as the “Halloween lady beetle” for its abundance at the end of October, is not native to North America. It was repeatedly introduced here by state, federal, and private interests to augment native lady beetles for control of aphid pests in orchards. As early as 1916 an effort was made to establish this species in California. Subsequent efforts there and elsewhere appeared to fail each time.

Finally, in 1988, viable populations were discovered near New Orleans. Whether this was the result of a planned introduction, or an accidental importation, it marked the start of something big. Today, Harmonia axyridis is found over most of the United States and adjacent southern Canada, save for the southwest U.S. 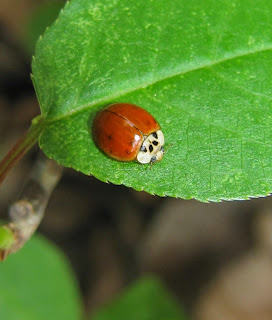 This species is not easily identifiable because it is so variable in color and pattern. Most individuals have bright red elytra (wing covers) with eighteen or nineteen black spots, but they may be orange and spotless, or even black with only a pair of red spots. There is every combination in between, too. They can thus be confused with many native species.

The overriding clue to their identification seems to be their sheer abundance. There is some circumstantial evidence that they might even be displacing native species, but probably not as much so as another non-native lady beetle, the seven-spotted (“C-7”) lady beetle, Coccinella septempunctata.

Nowhere is the abundance of Harmonia axyridis more obvious or obnoxious than when they congregate indoors while seeking snug spots in which to overwinter. Their sudden appearance usually means a flood of telephone calls from irate homeowners to the state department of agriculture and county extension agents. It is no one agency’s “fault,” though, and at most the beetles are a “nuisance pest” that can sometimes emit a foul odor or stain fabrics. They most definitely do not breed indoors or eat clothing or blankets. In fact, they subsist on fat reserves during the colder months, not feeding at all. 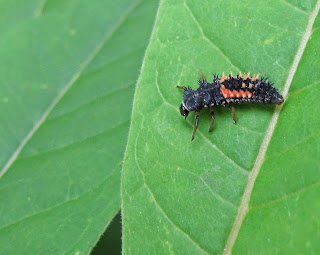 There are persistent reports of the insects biting people, but this does not represent an attack as much as curiosity. Insects in general investigate things through taste, smell, and touch. Nor does it mean the beetle is acting in self-defense. Lady beetles defend themselves by secreting a noxious yellow fluid from their “knee” joints in a behavior known as reflex bleeding. This liquid smells awful and can leave a stain. 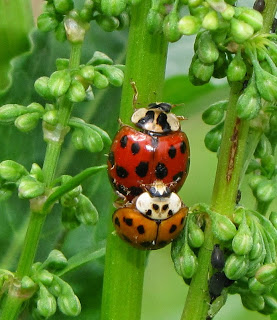 Preventing multicolored Asian lady beetles from entering your home or office building is the easiest way to avoid problems. Replace worn weatherstripping on doors. Repair holes in widow screens, and seal other cracks and crevices. Consider vacuuming up any beetles that do make it indoors and releasing them outdoors near a woodpile or other sheltered situation away from your home.

You might also consider painting your home a different color. Evidence shows that the beetles are most attracted to pale hues such as white, gray, and yellow.

More information about these beetles can be found online through fact sheets from Ohio State University and the USDA Agricultural Research Service. 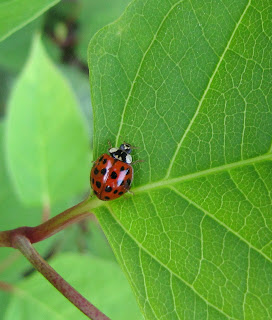