Once cold weather sets in, it is more difficult to find wildlife, even insects. Sometimes, though, they find you. Such was the case last week when the nymph of a brown-banded cockroach, Supella longipalpa, crossed my desk at the lab while I was eating lunch. 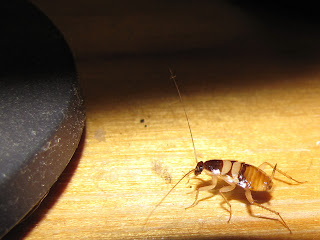 I have taken to calling brown-banded roaches the “university roach” because that is the only place I’ve ever seen them: Oregon State University, the University of Arizona, and now here at UMass (Amherst). I’m not sure what, if anything, this says about the academic proclivities of the species, but it is certainly more sharply dressed than our other domestic pest cockroaches.

The two-tone coloration of brown-banded cockroaches is especially obvious in the nymphs, before the wings obscure the markings on the abdomen. These are not large roaches, perhaps a little bigger than German cockroaches, but still much smaller than American roaches and other members of the Periplaneta genus.

Like the other domicilatory roaches, the brown-banded is not native to North America. Its origins remain elusive, but perhaps its homeland is somewhere in tropical Africa. Females are flightless, having short, non-functional wings, but it does not deter the mobility of the species. Brown-banded roaches are frequently transported inside of furniture, which may explain the appearance of that nymph on my desktop. Male brown-bandeds are, ironically, quick to fly when disturbed.

Watch for brown-banded roaches in warmer, drier places than other roaches. They may seek shelter behind pictures on the wall, or in appliances. This latter habit has earned them the popular nickname of “TV roach.” I suspect the one exploring my desk normally resides inside the computer tower. Doesn’t seem to affffffffect the….perforMancccce of the thing, though…. 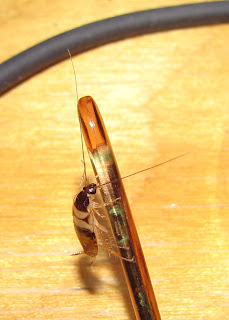