I have no idea whether she is the same individual that I introduced in ”The University Roach” back in November, but on Monday, December 14, I finally spotted an adult female brown-banded roach on the floor in my lab. Since the first sighting I have learned a little more about the species, too. 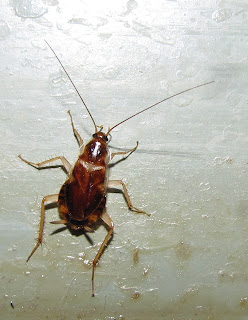 Ok, maybe what I really learned is just how much we collectively don’t know, like exactly where this species came from in the first place. My initial research concluded that Supella longipalpa is probably native to Africa. According to the second edition of How to Know the Grasshoppers, Cockroaches and Their Allies, by Jacques R. Helfer (Wm. C. Brown Company Publishers, Dubuque, Iowa, 1972), the brown-banded cockroach was known only from Florida from 1903 until at least 1917. The text further states that the species was introduced to Arizona in 1933. An asterisk footnote recognizes that “Supella longipalpa (F.) has been very successful in extending its range and has now turned up in every state.”

The homeland of this species is disputed in Stephen A. Marshall’s tome, Insects: Their Natural History and Diversity (Firefly Books, Richmond Hill, Ontario, 2006). The author states that this species is native to India, and that it is becoming increasingly common in households throughout North America.

David George Gordon, in his highly-readable book The Compleat Cockroach (Ten Speed Press, Berkeley, California, 1996), agrees with the African origin of the species, adding that it wasn’t until troops returned from World War II that brown-bandeds really made inroads in the U.S., and that “By 1967, brownbandeds were reported in forty-seven of the forty-eight contiguous states.”

The Cockroach Combat Manual, by Dr. Austin M. Frishman and Arthur P. Schwartz (William Morrow and Company, Inc., New York, New York, 1980) gives a more detailed description of the African scenario, indicating that this species got to Florida via Cuba (1892), arriving in Key West and Miami in 1903. No word on whether it fled Cuba due to political instability. This book also names Vermont as the sole state to be free of this pest as of 1967.

All authorities do seem to agree that this roach is most likely to be found inside furniture and electrical appliances. They have a fondness for starchy materials, too, and will munch on the paste used in bookbinding, and also on wallpaper paste. Body fluids from molting and deceased specimens can sometimes cause short circuits in televisions and other electronic equipment. Maybe there really is a bug in your computer…. 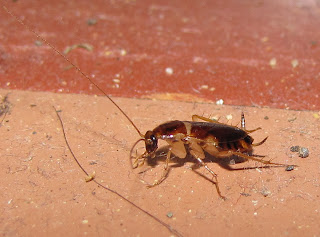