Last Sunday, January 21, I visited the “Butterfly Magic” exhibit of live tropical butterflies at the Tucson Botanical Gardens. This is the sixth anniversary of what has become an annual event, lasting several months. The current incarnation opened on October 12, 2009 and will continue through April 30, 2010. 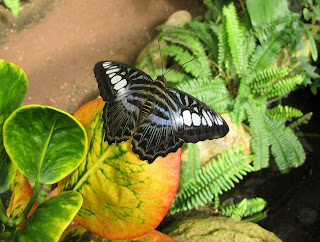 Despite being dramatically smaller than dedicated butterfly houses like Magic Wings, the confines of the tropical greenhouse boast a surprising diversity of species. I spent more than five hours there and was finding “new” species right up until my departure. The volunteers for the exhibit release newly-emerged specimens at least three times per day, but many of the butterflies already in the room are cryptic enough to escape detection by the average visitor. 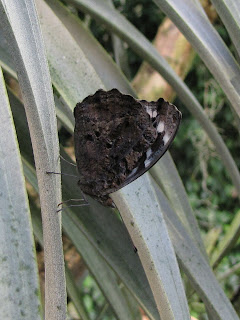 One of the unfortunate aspects of any butterfly display facility is the difficulty in taking images of the butterflies in as “natural” a setting as possible. Some of the insects seem to park themselves at those ugly feeding stations, making for far less than a photogenic opportunity. 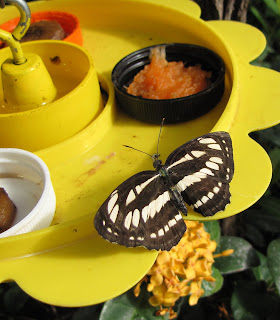 Then it never fails that the best shot you could possibly hope for also includes an out-of-focus person in the background wearing bright clothing. How do you politely say “Ma’am, you’re in my shot?” Mostly, you wait for the background personnel to clear and hope the butterfly has waited as well.

The Tucson Botanical Gardens solve part of the photographic problem by setting aside time strictly for photographers, without competing crowds, but it is at the end of the day when the incoming sunlight is not particularly good, and they charge double the normal admission price.

Still, one can’t complain, and you can still get stunning images of a great many species. Just be prepared for the obligatory heat and humidity, and understand it will take your camera lens at least ten minutes to become steam-free. I’ll be sharing more of my own images in the coming weeks for those who want to live vicariously through my blog. 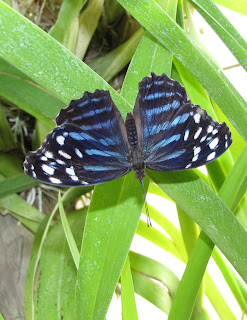 Each trip promises to be different because the TBG has scheduled different shipments of butterflies from different parts of the world each month. October and November of last year featured native butterflies from Arizona and other parts of the southern U.S. December’s butterflies were from Australia. January was for African species, and February will spotlight Asian butterflies. March and April will be a veritable cornucopia of species from throughout the world.

NOTE: I now monitor the comments on my blogs, but have been experiencing browser failure in my Yahoo Mail recently. There may be a substantial lag between when comments are posted and when they are approved. My sincerest apologies for the inconvenience.