I like to turn on the porch light at my Tucson, Arizona apartment to see what insects (and sometimes other organisms like Mediterranean Geckos) show up to visit. Well, most of the time I like to do this. Right now it is an exercise in annoyance as the porch light is quickly overwhelmed by tiny true bugs known as “False Chinch Bugs,” Nysius raphanus. 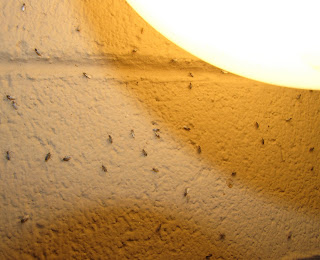 At only 3-4 millimeters, each individual bug is not terribly imposing. It is the sheer numbers of them that are a nuisance. They fly well and before you know it everything in the immediate vicinity is covered in them: you, your camera, your clothes, and any other objects close to the light source.

This tendency for Nysius to aggregate extends to their feeding habits as well. Hordes of them may literally suck the life out of certain plants, though they subsist for the most part on weeds. Severe damage to a variety of crops does occur on the rare occasions of large outbreaks of the false chinch bug. Their combined feeding, coupled with toxic secretions they inject in the course of feeding, can wilt foliage rapidly.

These insects are quite capable of migrating like a miniature swarm of locusts, too. They have been observed flying several hundred feet above the ground. It is suspected that an “aggregation pheromone,” a specific chemical compound emitted by the insects, is responsible for the mass behaviors.

Like all true bugs, false chinch bugs undergo “incomplete” metamorphosis. They hatch from the egg looking like miniature versions of adults, but lacking wings and reproductive organs. These babies are called “nymphs,” and they are sometimes mistaken for ticks by folks that find them on their clothing after a walk in a weedy area. They grow quickly, maturing in about three weeks. In some parts of North America they can produce three generations annually, overwintering as adults. 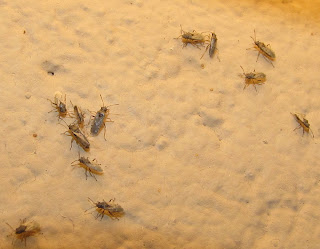 Thankfully, an onslaught of false chinch bugs is a brief phenomenon. They disperse within a few short weeks of their initial appearance. Meanwhile, they can be discouraged by keeping outdoor lighting to a minimum, and weeding in the spring to deprive them of the plants that they favor as nymphs.

There are many informative and reassuring internet resources for learning more about false chinch bugs, such as this fact sheet from Colorado State University Extension.

So far, my little population explosion seems minor by the standards I have read about, and until the monsoon rains kick in the diversity of species at my porch light will likely remain low anyway. Plus, leaving the light off should help ease my electric bill, or at least allow me the luxury of turning up the A/C a little higher.