I have noticed for a long while that many nature bloggers and photographers dedicate one day a week to a particular type of organism. There is “Fly Day Friday” and “Moth Monday” to be sure, so I have decided to institute my own version of this, which I dub “Wasp Wednesday.” This will be a challenge since I don’t have many wasp images in my archives. Nevertheless, may I welcome you to the debut of this weekly feature and introduce the Pacific Cicada Killer, Sphecius convallis. 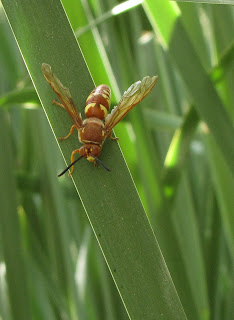 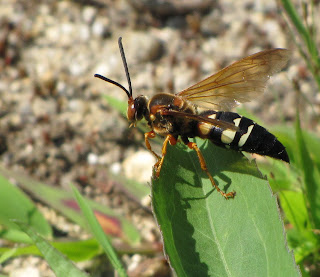 Cicada killers are named for their prey: Solitary females of this genus sting adult cicadas into paralysis and carry them back to their individual burrows as food for their larval offspring. The sight of one of these wasps flying back to its nest while carrying an equally large cicada will leave you in awe. 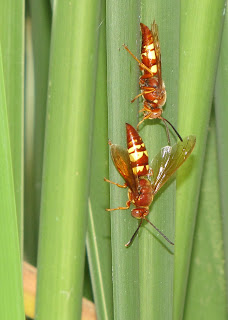 When not engaged in hunting or digging a nest burrow, or guarding a territory as the males do, Pacific Cicada Killers will seek refuge from the heat of the day in dense stands of vegetation. Here in southern Arizona, one can find them clinging to Desert Broom (Baccharis sarothroides) for example. I have found them nestled among cattails at an artificial riparian area in my neighborhood park here in Tucson.

Female cicada killers differ from males in behavior and morphology. Males are territorial, perching in places that overlook nesting aggregations of females, or sitting on the ground amongst the females. Males act aggressively toward other males, and other intruding organisms. They are “all bark,” however, since they possess no stinger. The spines at the tip of the tibia (“shin”) on the hind leg are short and not terribly obvious on males. 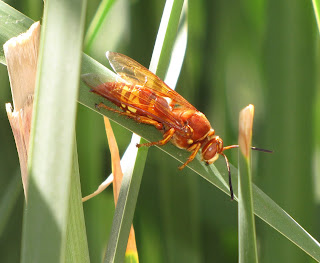 Female cicada killers have the spines on the hind tibia modified into heavy, blade-like appendages, clearly visible in the image below. They use these blades to help kick soil out of the burrow as they dig with the front legs. The female wasps are generally larger and bulkier than the males as well, but are too busy nesting and hunting to bother attacking people or any other animal. 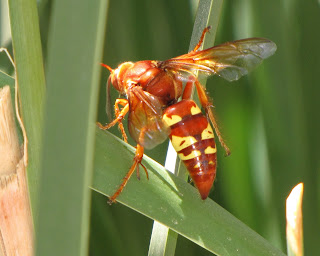 Despite the solitary nature of their nests, cicada killers do tolerate each other’s company, and many females may nest in large aggregations in a small area. The burrow entrances are surrounded by the excavated soil (called “tumulus”) and are easily mistaken for the work of small rodents. Underground, the burrow may extend up to four feet, with individual cells branching from the main tunnel. Each cell is provisioned with one to four paralyzed cicadas. One cicada yields one male cicada killer. More cicadas will feed a future female.

Each cell is sealed after completion, and the entire nest burrow is eventually completed and sealed. The female does not stick around to care for her offspring. Instead she may start a new burrow.

Pacific Cicada Killers are known to use Apache Cicadas, Diceroprocta apache, and Silver-bellied annual cicadas, Tibicen pruinosus as hosts. It probably has other hosts in the Pacific Northwest where neither of these cicadas occurs.

Sphecius convallis ranges throughout the United States west of the 100th meridian (roughly west Texas, the Oklahoma panhandle, western third of Kansas and Nebraska, and the western half of the Dakotas). Please let me know if you find this species in your area, or in your travels. Please consult Professor Chuck Holliday’s Cicada Killer Page for information on how to tell this species apart from the Western Cicada Killer. His research is also suggesting there may be a cryptic species within the currently recognized Sphecius convallis, so your observations and/or specimens could prove quite valuable.