Sometimes it is easier to identify a wasp by the prey it is carrying than by the wasp itself. Ned Harris and myself found this wasp at Madera Canyon’s White House Picnic Area last week. Ned noticed the grasshopper prey before I did. I was convinced the wasp was another species until I saw it was a grasshopper of the family Acrididae, which told me differently. Here at last was Prionyx thomae. 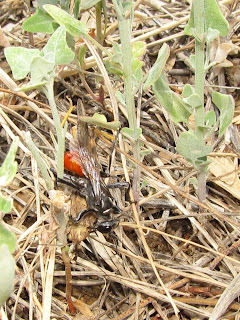 There are seven species of wasps in the genus Prionyx (family Sphecidae) found in the United States. Collectively they range across the entire U.S. and adjacent southern Canada, so there is probably at least one species calling your own geographic location home. All are “thread-waisted” wasps with a very globose abdomen and stout, spiny legs. Two species are entirely black in color (atratus and subatratus), while the remainder are black and red with silvery highlights.

These are solitary wasps, each individual female making her own nest, the same as the cicada killers I introduced last week. Both are also termed “parasitoid” species. Parasitoids invariably kill their hosts. The interesting thing about parasitoid wasps is that most species actively carry their victims to a storage site rather than leaving them in situ. This probably evolved to protect the wasp’s offspring, and their food, from predators and parasites.

Prionyx thomae has no common English name. Most insects that are of no economic importance have only a Latin or Greek name. This species, which ranges from the southeastern and western U.S. to Argentina, looks very similar to P. parkeri and P. canadensis. I have yet to find canadensis here in southeast Arizona, however, and parkeri can be readily identified by the two pairs of long palps, part of its mouthparts. 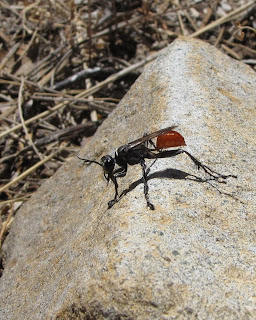 Back to the action. When Ned and I spotted this particular wasp, she was in the usual state of alertness and nervousness of most solitary wasps. She snapped at ants that blundered near her or her paralyzed grasshopper prey. She stopped on a rock and groomed herself. She maneuvered the grasshopper into a better location. Then she began to excavate a burrow in the damp, rocky soil. Apparently the audience was too much and she evidently abandoned the burrow and her prey. 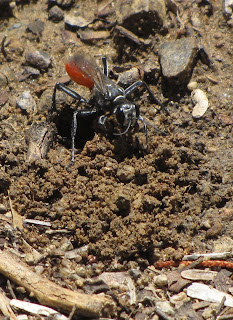 The victim in this instance appeared to be a band-winged grasshopper, Conozoa carinata. Other recorded hosts for this wasp include Amphitornus, Aulocara, Orphulella pelidna, Arphia xanthoptera, Dissosteira Carolina, Encoptolopus subgracilis, and Paraidemona. Most of these are not small grasshoppers, and the ability of the wasp to lug around one of them over rugged terrain would be comparable to a person carrying a couch single-handedly. 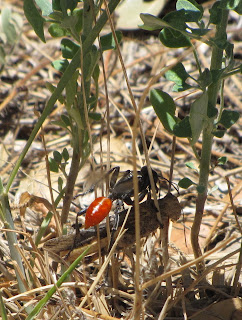 The female wasp secures her prey before digging a burrow. The burrow can be curved, linear, or L-shaped, and ends in a single chamber that receives the single grasshopper victim. The wasp then lays an egg on it, exits, and seals the burrow entrance. She then leaves to repeat the process again.

During the process of digging and provisioning the burrow the wasp and her prey are both vulnerable to parasites. Chief among them are the “satellite flies” of the subfamily Miltogramminae (in the family Sarcophagidae). Satellite flies get their name from the way they “orbit” their hosts, waiting for a chance to deposit eggs on the wasp’s prey. The fly larvae that hatch then feed on the food that was intended for the larval wasps, effectively starving them to death. Such behavior is called “kleptoparasitism” when a parasite “robs” the host of its rightful resources. I took the image below in South Deerfield, Massachusetts. The wasp in this case was probably Prionyx canadensis. 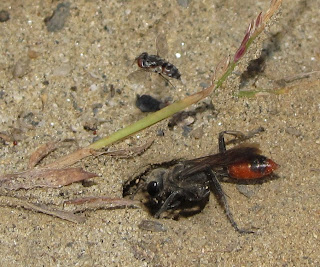 There is no end to the dramas that take place on a macroscopic scale in your flowerbed, lawn, or child’s sandbox. You just have to be observant and interested. Then, I guarantee you, you will be entertained, mesmerized, and awed by how incredibly strong, intelligent, and energetic most insects are.