Since this insect is literally making the headlines right now, I am re-publishing this post introducing the “brown marmorated stink bug,” Halyomorpha halys. Special thanks to John R. Maxwell for allowing use of his images of this insect. 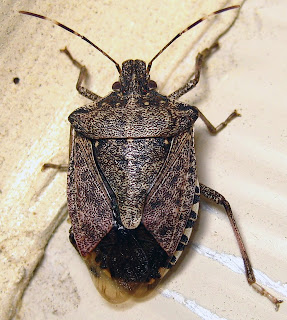 Unlike the western conifer seed bug and the boxelder bugs, the brown marmorated stink bug is not native to the North American continent. It was first detected in Allentown, Pennsylvania in September, 1998 but probably arrived at least two years earlier. The insect hails from Asia, being indigenous to China, Japan, Taiwan and Korea.

Thus far, H. halys has amounted to a mere “nuisance pest” that appears in numbers on the exterior of homes as it seeks shelter for the winter. The adult insects fly well, and sometimes manage to creep indoors, much to the consternation of property owners. The fact that they can deploy their scent glands when under duress makes them even more unappealing.

Outdoors, during the spring and summer months, nymphs and adults feed on a variety of plants, shrubs, trees, and fruits. They sip liquid sap and fruit juices through beak-like mouthparts collectively called a rostrum. Their feeding causes mostly cosmetic damage and they have not yet attained pest status for that reason. This is not the case in their native range where they are especially problematic for soybean growers.

Unfortunately, these are non-descript bugs that are easily confused with innocuous native stink bugs like those in the genus Brochymena. Older nymphs like this one do sport distinctive spikes and spines, and black and white-banded legs. 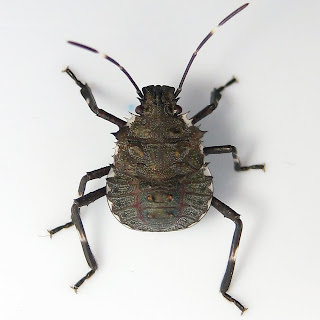 It is the aggregation behavior of the adults in the fall that seems to be their most unique and identifying characteristic.

Since its first appearance in Pennsylvania, the brown marmorated stink bug has been discovered in the following states: Connecticut, Delaware, Idaho, Indiana, Illinois, Iowa, Maine, Maryland, Minnesota, Mississippi, Montana, New Jersey, New York, Nevada, Ohio, Oregon, South Dakota, Tennessee, Utah, Virginia, Washington, West Virginia, Wisconsin, Wyoming, and the District of Columbia. Specimens have also been intercepted by agriculture officials in California and Florida. Should you suspect you have found this species in a state not on this list, you are urged to report your finding (backed up with specimens whenever possible) to your state department of agriculture.

As with all of the insects being profiled in this series, care should be taken to exclude the bugs from entry into structures by repairing worn weatherstripping, mending holes in window screens, and sealing other possible points of entry with silicone caulking and other such materials.