Among the parasitic wasps, members of the family Braconidae are often very conspicuous. Most braconids are very similar to ichneumon wasps, and easily mistaken for them at first glance. Differences in wing venation and abdominal structure are the key to separating the two families. The subfamily Cheloninae is one of the more easily recognized because the abdomen appears to consist of only one segment. 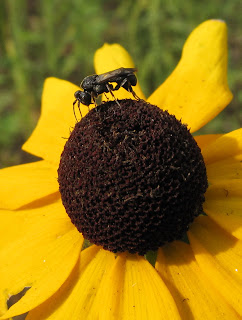 The first three “urotergites” of these wasps are fused, meaning that what are normally individual segments on the dorsal (top) side of the abdomen are fused into essentially one plate that hides the remaining dorsal segmens. The ventral (underside) of the abdomen is at least slightly more normal in its segmentation.

The Cheloninae includes seven genera worldwide. The genus Chelonus alone contains approximately 139 species in North America north of Mexico. All are internal parasites of the larvae of Lepidoptera, especially the pyralid and tortricid moths.

The life cycle of chelonines is quite remarkable. Females use their hair-like ovipositor to insert an egg into the egg of the host. I initially thought that the wasp in these images was ovipositing into the flowerhead, but apparently it had detected the eggs of a host already embedded in this flower. Once the larval wasp hatches, things get really interesting.

The wasp larva remains in its first instar (the first larval stage that hatches from the egg) while the host caterpillar it is living inside of matures. It is not until the caterpillar spins a cocoon or otherwise prepares to pupate that the wasp larva resumes its own development, consuming the host in the process. Even more amazing, there is at least one documented instance of the host caterpillar’s life history being altered to the point that the caterpillar attempts to pupate earlier than normal. Theories on how the parasite might cause this interruption in the host’s normal life cycle are discussed in this 1985 article in the journal Physiological Entomology. 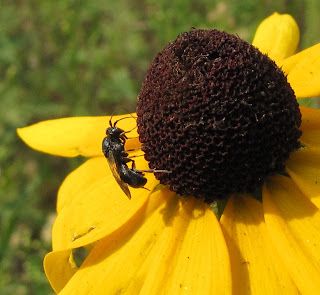 These are not large wasps, maybe 5 millimeters on average, but they are fairly robust and easy to spot on late summer and fall flowers like wild carrot. See if you can’t find some in your own neighborhood.