When I was in western Massachusetts last fall, the neighbors across the street in South Deerfield had to have a dying maple tree removed. I came home one evening to find the tree in pieces, neatly cut by a chainsaw. Naturally, I wanted to investigate the insect fauna of the new deadfall. Among the creatures to be seen on those early October days were ichneumon wasps of the genus Odontocolon. 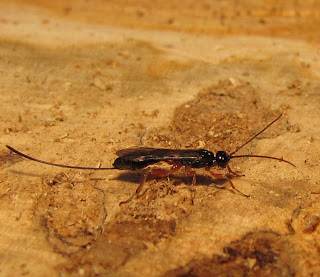 Many thanks go to Bob Carlson, an expert on the family Ichneumonidae who recognized the genus from my images. He has almost single-handedly organized the pages and pages of ichneumons over at Bugguide.net.

Odontocolon is one of four genera in the subfamily Xoridinae. All are recognized as parasites of wood-boring beetles and/or Hymenoptera. There are 23 species of Odonotcolon found north of Mexico. Several are “holarctic,” meaning they are native to the entire northern hemisphere. The genus is recognized in part by the teeth on the hind femur. Females have long ovipositors (see image above), while males do not (see below). 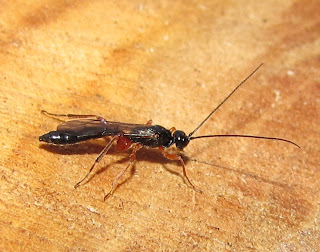 Those ovipositors come in handy since the wasp has to drill into the wood to reach her target. Cutting down the maple tree exposed several grubs of longhorned woodborers (Cerambycide) lying on the stump. 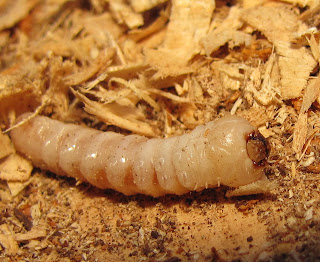 Maybe this is what the wasps were after, but they ignored the helpless beetle grubs out in the open. Perhaps the wasps knew those grubs would be bird food any minute, or would die in some other fashion before the larval wasps could make meals out of them. In any event, I was able to witness one female ovipositing in the stump. 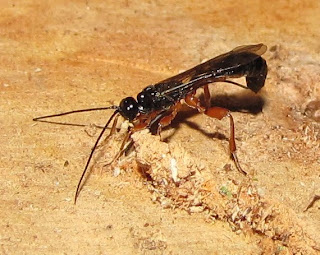 An egg is laid on the living beetle grub, and the female then withdraws her ovipositor to go looking for another host. The larva that hatches from her egg lives as an external parasite on its host, taking its time as the host itself matures. Sometimes a female wasp will oviposit on the pupa of the host, rather than the grub. The result is the same: her larval offspring will consume the host and emerge from the host’s pupa.

Many other ichneumon wasps are parasitic on wood-boring insects, the most spectacular being the giant ichneumons in the genus Megarhyssa which I wrote about last year, before I started “Wasp Wednesday.” Autumn is the perfect time to look for ichneumons on dead and dying trees, so go take a look.