Most members of the superfamily Chalcidoidea are very tiny parasitic wasps. The leucospids, family Leucospidae, are veritable giants by comparison. They are so large they are easily mistaken for mason and potter wasps, right down to their ornate black and yellow markings, and the way the front wings are folded longitudinally when not in use. 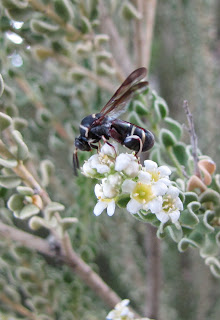 The six North American species in the family Leucospidae all belong to the genus Leucospis. They range in length from 3-14 mm, but are easily identified as chalcids by the greatly swollen and toothed hind femora (“thighs”). They are widely regarded as uncommon or even rare wasps, but in my experience they are quite common, just easily overlooked, or dismissed as yet another mason wasp. Look for them sipping nectar from flowers like wild carrot. Females (pictured above) have a slender ovipositor that curls back over the top of the abdomen. Males (see image below), are smaller and lack the egg-laying organ. 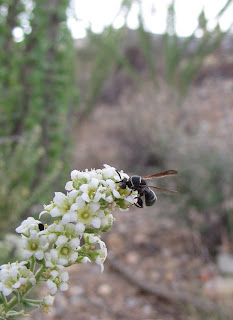 Leucospids are external parasites of other solitary wasps, and also solitary bees. That is to say, they are parasites in their larval stage. Adult females lay their eggs in the nests of their hosts. This may mean that the female is drilling through the dead wood of a hollow twig to reach the host’s nest cells inside. The most common and widespread North American species, Leucospis affinis, is primarily a parasite of megachilid bees including leafcutter bees (Megachile), mason bees (Osmia), and resin bees (Dianthidium). These bees all frequently nest in hollow twigs or similar pre-existing cavities that they partition into cells.

The first larval leucospid to hatch in a cell of the host nest has one mission at the outset: eliminate the competition. The larva will seek and destroy any other leucospid larvae or eggs that occupy the same cell. The wasp larva then attaches itself to the bee larva and begins slowly sucking it dry. The bee larva will mature enough to spin a cocoon around itself and its wasp larva parasite, but it will never become an adult bee. The leucospid larva finishes off the bee larva, leaving an empty husk. Observations of the life cycle in situ and in the lab show that development is fast: A leucospid larva matures in about seven to twelve days after hatching from its egg, pupating in another five days inside the cocoon prepared by the now-deceased bee larva. An adult wasp emerges from the pupa in 9-14 days (or overwinters in the case of late-season generations). The size of a given individual adult leucospid varies according to the size of the host larva it was a parasite of. 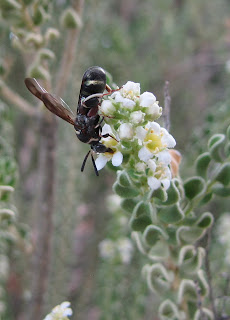 Much remains to be learned about these wasps, and their impact on native pollinators like the leafcutter bees. Your own personal observations could prove quite insightful and valuable. Meanwhile, check out the amazing life cycle images in the Universal Chalcidoidea Database, and additional images of adults at Bugguide.net.