Mary Klinkel, one of the volunteers for the Butterfly Magic display at the Tucson Botanical Gardens, invited me to join her in her quest to find a female Chiricahua White butterfly, Neophasia terlooii, in Madera Canyon on November 17. I eagerly accepted since I had never seen this species myself. The day was warm and clear, and we saw many butterflies and other insects.

We drove to the very end of the road and struck out on the trail at around 11:30 AM. Walking up the dry streambed we eventually encountered a trickle of water, and insects seemed to appear instantly, out of thin air. Among them was a lone male Chiricahua White. He quickly vanished from view, however, actively crawling into the leaf litter to reach the water underneath. I approached cautiously, and after several minutes succeeded in spying the sneaky devil. 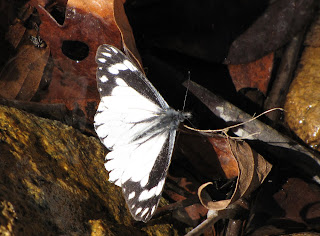 The Chiricahua White is restricted in its geographic distribution to the isolated “sky islands” of southeast Arizona in the U.S., but also occurs in Mexico. Many of you are probably more familiar with its cousin, the Pine White, Neophasia menapia. The Pine White ranges from southern British Columbia south to California and northern Arizona, east to the Rocky Mountains. The caterpillars of both species feed on conifers, the Chiricahuan White apparently restricted to Ponderosa Pine and Engelmann Spruce.

There are two generations of the Chiricahuan White, one in early summer and one in autumn. The fall population seems to be much larger than the summer population. Males tend to outnumber females, which is normally the case in most insects. How do you tell the genders apart, though, and why was Mary so anxious to find a female?

Many species of butterflies exhibit “sexual dimorphism,” whereby males and females may appear radically different in appearance. Color, size, and even wing shape can vary in these cases. Females of the Chiricahuan White are, of all things, Halloween orange in color, with black wing veins. 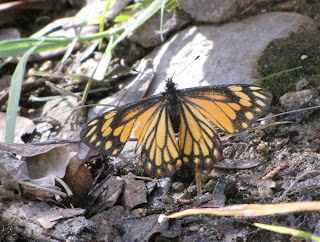 I was lucky to see this tattered female (above) alight along the edge of the stream, where she remained while I called to Mary. Mary worked her way back down the trail and then stalked the butterfly with camera in hand. Eventually, she was able to gently coax the creature onto her finger. It was a real Kodak moment and a thrill for Mary. 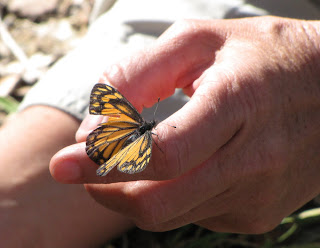 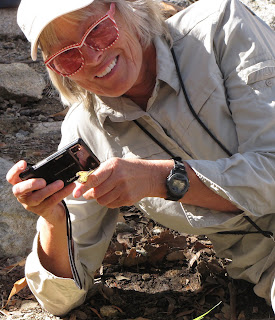 We managed to find one more male on the way back down the trail. He was in perfect condition but seemed to fly clumsily, becoming tangled among grassblades before finally extricating himself and settling on this rock. I suspect that many specimens of this species simply drown in attempts to drink. 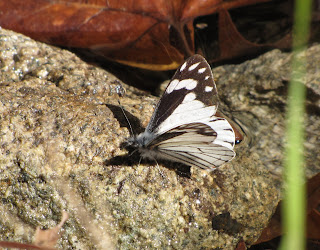 : This species is also known as the “Mexican Pine White,” with alternate spellings, or misspellings of the species name: terlooti and terlootii. Another excellent account of this species can be found at the ”Firefly Forest” website.