I know! What the heck is a “pygmy mole cricket?” Well, they are actually more akin to short-horned grasshoppers than mole crickets. I have known about them for some time, but finally saw two “in the wild” in the Sabino Canyon Recreation Area last Sunday, December 19. 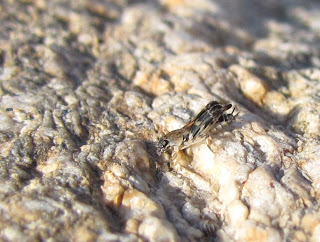 The family Tridactylidae occurs on all the major continents except Antarctica, but most species are apparently tropical. There are only two species currently recognized in North America, and the one I encountered is likely Neotridactylus apicalis, the “Larger Pygmy Mole Cricket.” That species ranges from extreme southern Ontario east to Massachusetts, south to Florida, and west to southern California.

At about the size of a grain of rice (ok, from 5.5-10 mm), they are not very noticeable. Couple that with their habit of tunneling under the sand along the margins of streams, rivers, ponds and lakes, and it is no wonder they are not more familiar to naturalists. They move rather slowly, or at least this pair did as they crept up the surface of a streamside boulder. The hind legs of these insects are positively enormous, and the hind femora alone usually conceal the folded wings of the adults. The front wings are leathery and reduced to short stubs, while the membranous, pleated hind wings extend just beyond the abdomen when folded.

I was pleased that these individual specimens were so tolerant of a close approach with my camera (though I wished for a really good macro lens), because when they finally did decide to jump….Game over! They seemed to disappear into thin air. There was certainly no finding them again.

The physics of these jumps is remarkable, as revealed in the abstract for ”Jumping Mechanisms and Performance of Pygmy Mole Crickets” in the Journal of Experimental Biology, 2010 Jul 15;213(Pt 14):2386-98, by M. Burrows and M. D. Picker. Were a human even capable of such a feat, he would likely pass out from the G-force alone. 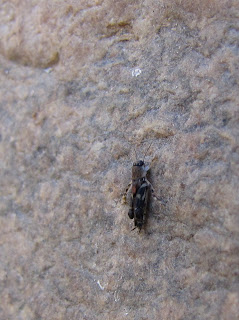 Pygmy mole crickets, which are also known as pygmy sand crickets or pygmy mole grasshoppers, apparently ingest sand particles and whatever algae and other organic matter adheres to them. Their subterranean burrows extend 2-3 centimeters below the surface, and females create brood chambers at the bottom of their tunnels.

Do keep an eye out for these little wonders. You are likely to find other insects in the same habitats, like the grouse locusts I’ll discuss in the next week or two. Happy hunting.