Ok, I couldn’t resist writing about one more species in the genus Ammophila, if only because it represents a distinct pair of species that differs considerably from other members of their species group. Ammophila wrightii, and its relative A. formicoides, are mimics of ants. 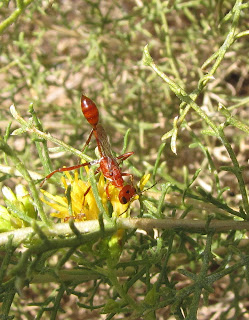 I was fortunate to find this specimen nectaring on flowers of Burroweed (Isocoma tenuisecta) at the Arizona Sonora Desert Museum just west of Tucson on the afternoon of September 26, 2010. One rarely sees this insect on flowers. Females are usually actively crawling on the ground in the manner of harvester ants. They are easily mistaken for those social insects and thus frequently overlooked.

This is one of the smaller species of Ammophila (under 20 mm), and colored almost uniformly reddish brown. The species ranges from California and Nevada east to northern Nebraska and south to at least the Mexican border. There is one record from north-central Oregon. Oddly, most western specimens have three submarginal cells in the front wing while specimens from the eastern portion of its range have only two submarginal cells. Why the extra wing vein in some specimens remains a mystery. Both A. wrightii and A. formicoides also have a low, flattened pronotal collar (base of the “neck”). It is hard to believe, but both species are in the same species group as the gargantuan Ammophila procera! 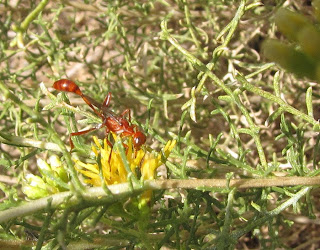 Ammophila wrightii exhibits at least one rather primitive behavioral characteristic: The nest burrow is excavated after a prey item is collected, instead of beforehand. Burrows are vertical in orientation, and only inchworm caterpillars from the moth family Geometridae are recorded as hosts. 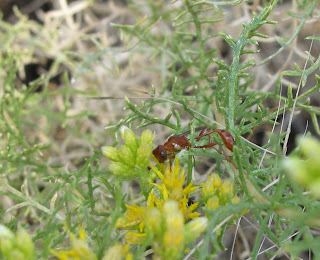 Not a great deal of field observations on this species have been recorded since C. H. Hicks published his in the journal Psyche in 1934. That was back when the species went by the name Sphex wrightii. Obviously, there is room for improvement. Go forth my friends, and seek your fortune of knowledge. 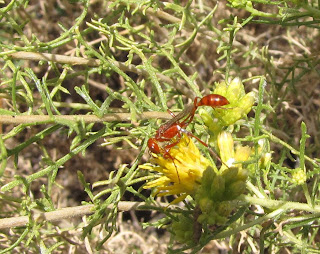 Special thanks to my friend and mentor Arnold Menke who identified my images.