It is often assumed that entomologists and arachnologists find no kind of arthropod to be revolting; that we never swat a mosquito, and that we vigorously advocate that the public refrain from bringing purposeful harm to any of the six- or eight-legged. Well, we have our limits. While I have a mild fascination with ticks, I don’t tolerate their presence on my body, my pets, or anyone else’s for that matter. There are good reasons to be vigilant when it comes to these parasitic mites, and Lyme Disease is only one. Bites from ticks can result in a variety of illnesses, including “heartland virus,” discovered earlier this year. 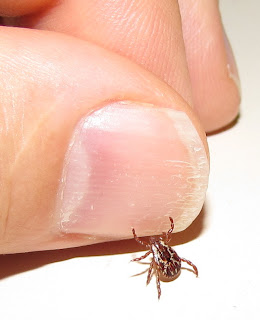 Tick types
North American ticks fall into two basic categories: Hard-bodied ticks, family Ixodidae, and soft-bodied ticks (Argasidae). Soft ticks are encountered infrequently, most species being associated with the burrows and nests of rodents, or with bats. A few are hosted by deer and livestock. Hard ticks are abundant, widespread, and nearly impossible to avoid. 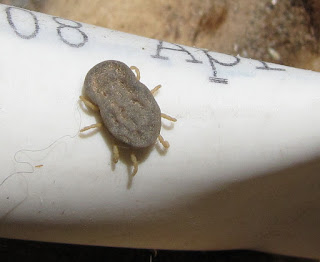 Tick biology
Ticks have a life cycle consisting of four stages: egg, larva, nymph, and adult. Larvae have only six legs, and are often referred to as “seed ticks.” The larva takes one blood meal from a host, then drops off the animal. It molts into an eight-legged nymph in about one week. The nymph locates a host and feeds, drops off, and molts into either another nymphal stage or an adult. Adult ticks are sexually mature specimens, whereas the preceding life stages are not. 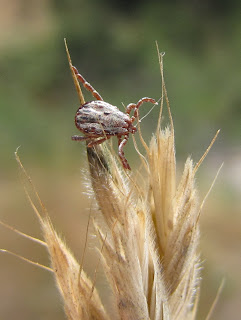 Ticks find hosts by a behavior known as “questing.” The tick climbs to the tip of a grassblade, leaf, or other object and perches with front legs outstretched. Special sense organs in the legs detect carbon dioxide breathed out by vertebrate animals. Additional sensory organs hone in on odors and body heat. Ticks usually grab a passing host, but they can quickly crawl 10-15 feet to reach a source of carbon dioxide, such as a grazing deer. 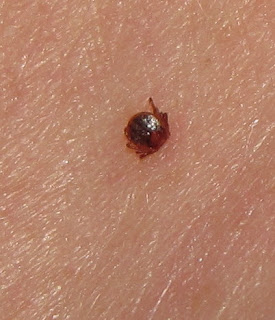 How ticks attach
Ticks bite with mouthparts that, under high magnification, resemble a Swiss army knife of sawblades. The paired chelicerae (“jaws”) saw into the skin of the host, and later tear into tiny capillaries to get the blood flowing. The central, harpoon-like mouthpart is called the hypostome, and that is the tube the tick uses to inject saliva and anti-coagulants, as well as siphoning the blood of the host. The chelicerae anchor the tick in place, but the tick also secretes a glue-like substance that hardens around the entire apparatus. No wonder ticks are so hard to remove once they lodge themselves into a person or pet. 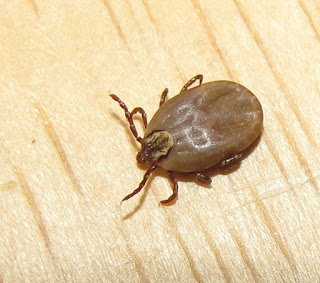 Tick feeding and reproduction
The exoskeleton covering the abdomen of a female tick is deceptively thick, leathery, and wrinkled, but capable of unbelievable expansion to accommodate a gut that swells with blood. She may balloon to twenty or fifty times her normal size, and up to 200 times her original weight before feeding. She needs the nourishment to produce her eggs….

And ticks are nothing if not prolific. Mating may take place before or after feeding, and on or off of a host. Females are typically larger than males, and often marked more ornately. The two genders find each other through pheromones, chemical scents emitted into the air. Each mated female lays large masses of eggs, some containing up to 20,000 ova. The eggs may be laid on or off of a host. 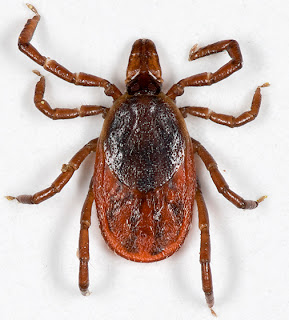 Deer Ticks
The tick that most often makes the news is the Blacklegged Tick, Ixodes scapularis (formerly known as I. dammini). This is the “deer tick” that vectors Lyme disease, named for the town of Old Lyme, Connecticut where it was first discovered in 1975. The disease was actually known from Europe as early as 1910, where it went by the name erythema migrans, roughly translated to “migrating red rash.” The organism that causes the disease is a spirochaete bacterium, Borrelia burgdorferi.

I won’t go into the particulars about Lyme disease, as there are plenty of other resources available. Contrary to popular belief, only the adult ticks feed on larger mammals like deer. The larvae and nymphs are hosted by birds and rodents. Increasingly, all host reservoirs are becoming more and more adapted to urban and suburban habitats, increasing human exposure to their pathogens and parasites. The Blacklegged Tick is also a vector of babesiosis; and its bite can cause tick paralysis.

The Western Blacklegged Tick, Ixodes pacificus, is the only other known carrier of Lyme disease. Incidences of the disease in west coast states, Utah, southern Nevada, and northwest Arizona are likely attributable to this tick species.

Heartland virus was discovered earlier this year in northwest Missouri. Initially, two patients were thought to be victims of ehrlichiosis, another tick-borne disease, but the patients failed to respond to treatment. Ticks have not been identified conclusively as the vectors of Heartland virus, merely implicated thus far. Deer ticks are substantially smaller than the next two species discussed here. 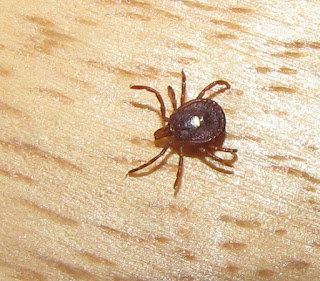 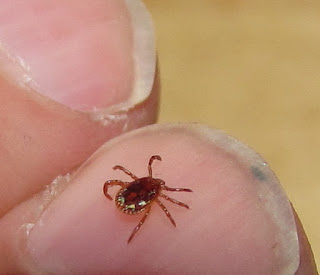 Lone Star Tick
Lyme and Heartland may make headlines, but ticks are responsible for a surprising array of medical problems. I recently visited Missouri with my wife, and we were both plucking ticks off ourselves and each other. The first ones I found were Lone Star Ticks, Amblyomma americanum. Females are easily recognized by the bright yellow or ivory spot on their backs. Males are smaller, with a few pale spots along the margin of the abdomen. This tick is well known as a vector of ehrlichiosis, tularemia, and Southern Tick-associated Rash Illness (STARI). It has also been implicated in the transmission of tick paralysis, and suspected as a vector of Q-fever. White-tailed deer are the principal host of all life stages of the tick, though larvae and nymphs are also found on birds. 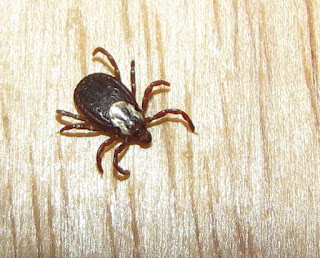 Wood Ticks
The other tick we found was the ubiquitous American Dog Tick, Dermacentor variabilis. We even pulled one off of our dog, who we had left with relatives in Kansas for a short time. Rocky Mountain Spotted Fever and tularemia are carried by this species. Tick paralysis is another malady caused by this species, and it is also a suspected carrier of ehrlichiosis. Larvae and nymphs of the American Dog Tick feed on small rodents, while the adults are hosted mostly by medium-sized mammals.

Ticks and pets
It is important to note that Fido can suffer from Lyme disease, too, and also anaplasmosis, another tick-borne ailment attributed to Blacklegged Ticks. Ask your veterinarian for the best ways to keep your pet from getting ticks.

Inspecting for ticks; and preventing them
Ticks have an uncanny ability to remain undetected until they find a spot to feed. Most people cannot feel a tick crawling on their body. Furthermore, ticks have a nasty habit of attaching in places you can’t readily see yourself: the small of your back, behind your knees, or behind your ears. It is recommended that you ask someone to help inspect you for ticks as soon as possible after an outdoor trek where ticks are likely to be found.

You can try to prevent ticks by wearing a longsleeve shirt, tucked into your pants, and with cuffs that fit tightly around your wrists. Long pants, the cuffs tucked into your boots, will help keep ticks at bay, too. Light-colored clothing is best because ticks are dark and more easily visible on beige or other pale colors. Insect repellants with DEET as the active ingredient have at least some efficacy in protecting you from ticks, but apply them correctly according to label instructions. 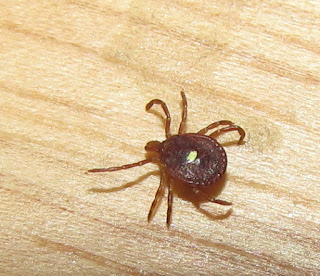 Sources: Drummond, Roger. 1998. Ticks and what you can do about them (2nd edition). Berkeley: Wilderness Press. 74 pp.
Centers for Disease Control. “Ticks”