Another springtime grasshopper one is likely to encounter east of the Rocky Mountains is the Velvet-striped Grasshopper, Eritettix simplex. It is classified as one of the “slant-faced grasshoppers,” though its head is only slightly inclined. 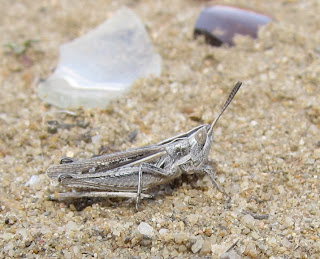 This species passes the winter as a third-, fourth-, or fifth-instar nymph, with adults obvious in early spring most years. This year I have yet to see a mature individual, though I saw nymphs early on. Even the adults are rather small, females measuring 19-26 millimeters, and males 14-21 millimeters from head to the tips of the folded wings.

Individuals vary drastically in color and pattern, such that they can easily be mistaken for other grasshopper species. The one below I mistook for an Obscure Grasshopper, Opeia obscura, but David Ferguson, an expert on Colorado grasshoppers, set me straight. The pattern of stripes on the thorax of this specimen is rather unusual for E. simplex. 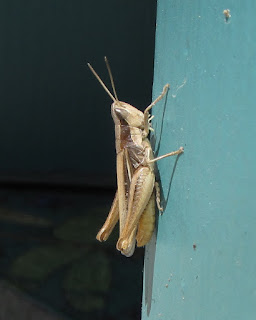 Some individuals even have extensive green markings, a good disguise for that time of year when new shoots are sprouting amid dry, brown dead grassblades. These insects are essentially invisible until you flush one into a hop or flight. 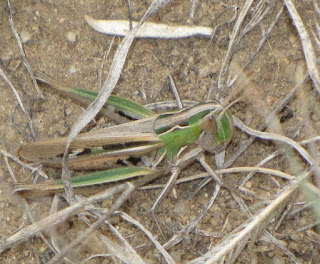 The male literally rocks the courtship thing. He will follow the object of his desire until he is about an inch away from her, then begin rocking from side to side. He then “sings” to her by rubbing one hind leg at a time against a raised vein on each front wing. After a chorus of this, like a fool he rushes in, mounting her. Mating takes place if she approves of her suitor.

The Velvet-striped Grasshopper ranges from extreme southern Saskatchewan to Arizona and northern Mexico, east through southern Minnesota, Iowa, Missouri, and northern Arkansas, reaching an eastern bottleneck through Tennessee, and expanding again into northern Georgia, eastern West Virginia, Connecticut, and the southeast corner of New York. It occurs in the Atlantic states, but is absent from the coastal plains. It apparently prefers shorter grasses in the tallgrass prairie biome, but I find it commonly in shortgrass prairie habitats, or mid-height grasses in open areas with patches of barren soil. In desert habitats it prefers moist swales. 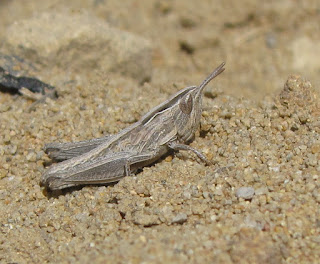 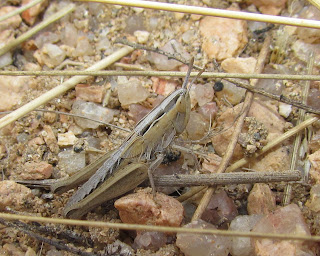 There are two other species of Eritettix in North America, but both species have abbreviated wings that do not reach the tip of the abdomen in adults. E. abortivus occurs throughout much of Texas and into southeast New Mexico and southern Oklahoma, while E. obscurus is restricted to Florida.

The Velvet-striped Grasshopper and its relatives are considered to be of no economic consequence, their populations seldom rising to even potentially destructive levels. They feed almost exclusively on grasses and sedges. 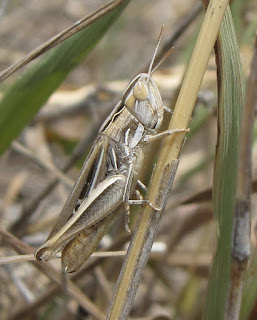