One of the more conspicuous wasps of springtime in deciduous forests of the eastern United States is the spider wasp Priocnemis minorata. Indeed, it is usually the first member of the family Pompilidae to be seen. You can find them right now, as I did in Missouri last week. 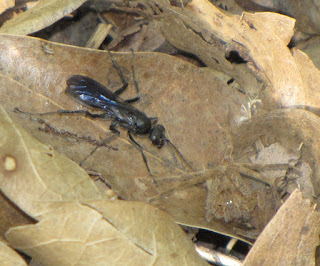 These are medium-sized insects, the length of the front wing varying from 6-12 millimeters, the entire insect a bit longer. Their long legs make them appear even larger overall. They are shiny black in color, with the wings having a smoky and/or iridescent appearance. Note the serrated top surface of the tibia (“shin” segment) on the hind leg. This character immediately sets them apart from other black spider wasps you are likely to encounter. Look for them hunting among leaf litter in places where there is dappled sunlight through the tree canopy. The wasps are active from late March to mid-June, with peak activity in April and May. 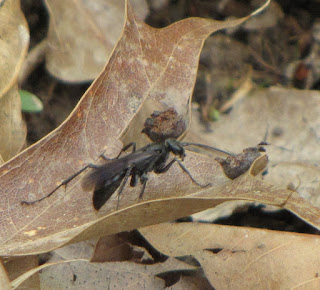 While this species is most abundant in the U.S. east of the 100th meridian, it has also been recorded from the Pacific Northwest in southeast British Columbia and western Oregon. Additional Canadian records include Nova Scotia, Quebec, and Ontario.

Last week I found the female specimen shown here at The Inn on Crescent Lake in Excelsior Springs, Kansas, that oddly persisted in staying in one place. Eventually, I figured out that she was in the process of carting off a paralyzed, immature nursery web spider, Pisaurina mira (family Pisauridae). It turns out this is not a new host record, as this spider species was discovered as a host for Priocnemis minorata previously (Kurczewski, et al., 1987).

Dick Walton has captured some stunning video of this species in action, including what might be a new host record: a running crab spider in the genus Thanatus (family Philodromidae). He also shows another specimen dispatching a wolf spider. 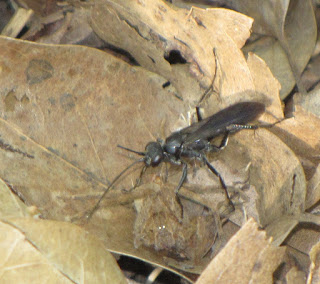 The female wasp digs a burrow prior to going hunting. The entrance is usually hidden under dead, dry leaves. The tunnel itself is vertical or slightly angled, and may reach a depth of 27.5 centimeters. One cell is constructed at the bottom of the shaft, with as many as six other cells branching off progressively from the bottom up. One spider is apparently stored in each cell, on its side, with an egg laid on the spider’s abdomen. The egg hatches in two days and the larva that hatches matures in about a week. The remainder of the year is spent in the pupa stage, until the adult wasp emerges the following spring.

When I lived in Cincinnati, Ohio, I could always tell when spring had really arrived by when the spider wasps were out. I encourage you to look for this species in your own neck of the woods, among the trilliums, violets, and other wildflowers on the forest floor. 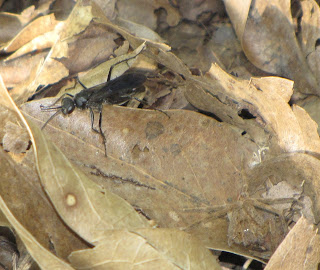