I have been neglectful in exploiting my camera’s ability to shoot video as well as still images, until this year. I use a Canon PowerShot SX10 IS, and it does a nice job delivering the quality still images you see here on my blog. I am surprised by the detail I can get in video, too, perfect for documenting insects in action, with all their odd behaviors. One of my first subjects was a thread-waisted wasp, Prionyx atratus. Actually, I know I took video of at least two different females, both in the process of stocking their underground burrows with paralyzed grasshoppers. 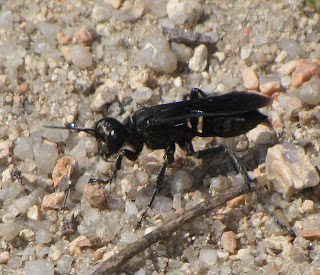 July 16, 2013 was, for whatever reason, my lucky day to find several wasps engaged in nesting behavior. Up the street from our townhouse here in Colorado Springs is a vast open area cut by Sand Creek, a mostly dry riverbed or “arroyo,” and the surrounding soil is likewise sandy and very hospitable to burrowing insects of all sorts. Many “social trails” weave throughout the vacant, degraded shortgrass prairie, and it was in these trails that Prionyx atratus were nesting.

Normally, wasps resting on the ground are quick to fly far away at your approach, so I was confused as to why this one wasp was not eager to make an exit. Instead, it was persistent in running around my feet. I backed off and noticed freshly-excavated sand at the mouth of a small hole. I watched, and sure enough, the female wasp made her way back to her construction site. I shot many still pictures before I even thought to try video, so she was nearly finished opening the nest when I shot the following clip.

Notice how she “pulls” loads of soil out of the burrow, using her front legs. This is in contrast to other wasps that actively kick sand out behind them (Bembix “sand wasps” for example).

Prionyx atratus, like most members of the genus, dig nest burrows after obtaining prey. After securing prey, they leave their paralyzed victim a good distance away from where they begin digging, perhaps minimizing the opportunity for parasites like the tiny “satellite flies” you can see in the video that stake out a nest and wait for an opportunity to lay their own eggs (satellite flies actually “larviposit,” laying tiny, live larvae) on the wasp’s prey.

What surprised me was the speed with which the wasp retrieved her prey and hauled it head first down into the nest. I only managed this still shot. 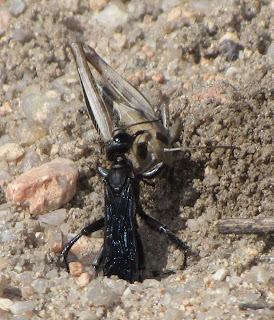 Later, I came across a second wasp, and this time I did manage to capture her retrieving her prey. She still nearly outran my ability to keep up with her through the lens. Keep in mind, too, that grasshoppers are not lightweight insects. She has no problem trucking the creature overland despite its size and weight. I imagine that feat would be comparable to a human carrying a sofa in their arms and teeth, holding the couch out in front of them. And then running with it.

Prionyx closes her nest as carefully as she digs it, packing the loose soil into the tunnel for at least a centimeter, then obliterating all evidence of her labors on the surface before flying off to start another nest elsewhere. Here is a short clip of the closing process.

This species is a stocky animal not easily confused with similar wasps given a good look. The body is relatively short, the abdomen not extending beyond the wingtips when the wasp is at rest. The legs are relatively short and very spiny, more so than in other sphecid wasps. The abdomen is nearly spherical, not oval or elongate like most other wasps. This species is entirely black, females with silvery or gold faces, owing to appressed, reflective scales. Females average 15 millimeters in body length, males 12 millimeters. Their stocky form makes the look substantially larger.

Look for this insect across virtually the entire U.S. and southwest Canada (British Columbia and Saskatchewan near the border). Take heed if a wasp sticks around in your presence, she may have a burrow close by.