Here it is, “Moth Monday,” and one species rises to the top of the priority list because it is experiencing a real population boom here on the Front Range in Colorado. The White-lined Sphinx, Hyles lineata, is common across most of North America, but in both the adult and larval stage it can make headlines and baffle the average citizen. 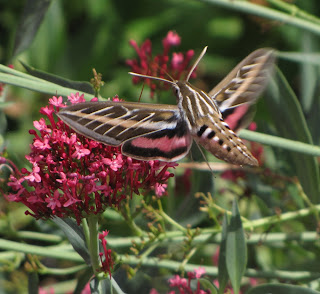 Several species in the family Sphingidae go by the informal name of “hummingbird moth” because they approach or exceed the size of hummingbirds (wingspan 6.3-9 centimeters), and are frequently seen hovering in front of flowers like their namesake feathered friends. At first glance, many people believe they are indeed seeing a hummingbird. Then that long proboscis comes into focus. Out comes the smart phone or camera, and several Facebook posts later the person may finally get a proper identification. 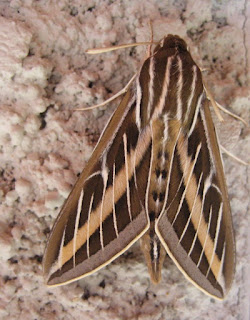 The adult moth can be active at almost any time of day or night, and visit a wide variety of flowers for the nectar they use to fuel their rapid, energetic flight. Below is a video I made of one of two specimens I saw in a butterfly garden in downtown Colorado Springs on August 30, 2013. I subsequently saw several more visiting an ornamental butterfly bush (Buddleja or Buddleia sp.) across the street from our townhouse….but they are everywhere right now, profiting from summer rains that made larval food plants available by the bushel.

It is the caterpillar stage that often causes people consternation. They superficially resemble the tomato hornworm, but are more conspicuous and often more numerous. The image below depicts the typical appearance, but the larvae can be yellow, or mostly black, with much variation in between. 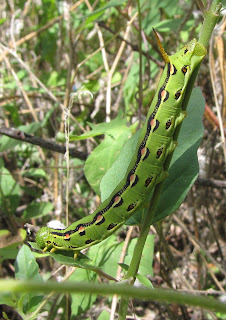 The caterpillars are general feeders on a variety of plants, shrubs, and trees, but seem partial to those in the evening primrose family. Oenothera primrose plants are not terribly substantial, so it takes more than one plant for a caterpillar to mature. The larva simply finishes off one plant and walks on to another. When there are lots of caterpillars (one female moth can lay up to 500 eggs), food plants can quickly become scarce as they are consumed, and the caterpillars are forced to “march” in search of literally greener pastures. These large scale “migrations” may cross rural roads creating a slick hazard as they are crushed under tires.

Once finished feeding, the caterpillar again begins walking in search of a place to pupate. Each larva burrows into the soil and creates a chamber several inches underground. There it molts into the pupa stage. This is how the species overwinters, though there is usually more than one generation per year, especially under favorable conditions.

The White-lined Sphinx also ranges south to Argentina. A very similar species, Hyles livornica occurs in Eurasia and Africa, and may account for persistent claims that H. lineata is found in the Old World.

Look for the adult moths at dusk and dawn, for they are mostly crepuscular in their activities. Still, they may show up at your porch light after dark as well. By day they usually hide among tangled grasses where the moth’s pattern of lines serves it well as camouflage. 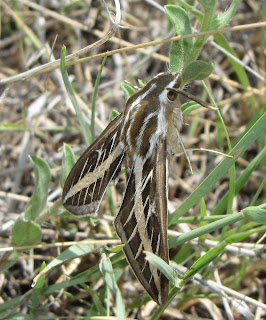 This is an animal of open habitats, so they are most abundant in prairies, deserts, agricultural lands, vacant lots, and gardens. In the western U.S., the White-lined Sphinx is a resident species only from southern California to west Texas. It immigrates annually farther north. Rarely is this moth a pest, though the caterpillars occasionally do damage to grapes and tomatoes in Utah.

Hyles lineata, as prolific as it is, is not without enemies. Pallid bats and large mantids eat the adult moths. Tachinid flies in the genera Belvosia, Drino, Winthemia, and Compsilura among others, are internal parasites of the caterpillars. Certainly ichneumon wasps and braconid wasps are also parasites. 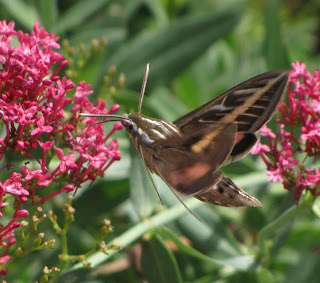