The Brown Recluse, Loxosceles reclusa, is without question the most infamous spider in the United States. Frequently maligned as the cause of serious necrotic wounds, and often confused with many harmless species, its reputation is inflated far beyond reality. 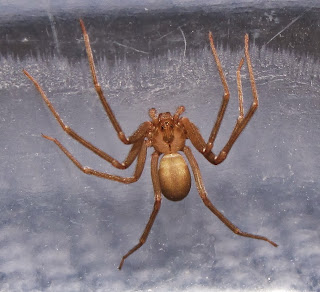 Also known as the “fiddleback” and “violin spider,” Loxosceles reclusa is usually marked distinctively on the carapace. This dark, violin-shaped marking may be vague, or even absent; and many other spiders have similar contrasting patterns. The only way to positively distinguish Loxosceles species is by their eyes. Brown spiders have only six eyes, compared to the usual eight eyes most spiders have. This sextet of ocular organs is arranged in a triangular pattern of three pairs. Understandably, most people don’t want to get close enough to a spider to see its eyes, but that is what is necessary to confirm an identification. Many other spiders are similarly colored, and of similar size. Recluse spiders attain a body length of 5-13 millimeters, with a legspan up to 30-40 millimeters. 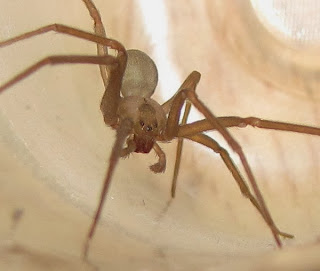 The Brown Recluse is native only to the central and southeast U.S., from Texas to northern Georgia, southeast Nebraska, southwest Ohio, and states in between. There are twelve other species of Loxosceles in North America, two of which are accidental introductions from other parts of the world. The Chilean Recluse, L. laeta, is found in only a few old, historical buildings in greater Los Angeles. The Mediterranean Recluse, L. rufescens, has turned up in many large urban areas, but is again usually restricted to a few highly localized populations. The remaining ten Loxosceles species are confined to the southwest U.S., from south Texas to southeast California and southern Nevada, and are found outdoors more often than in dwellings and other structures. While it is possible for any of the brown spiders to be transported outside their normal geographic range via commerce or travel, the Brown Recluse is less likely to spread than the foreign species. 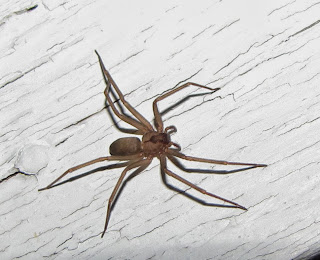 The medical significance of the Brown Recluse has been sensationalized by the media and the internet. Various websites display graphic images of the most extreme cases of envenomation, if the pictures even represent spider bites at all. Yes, the venom of Loxosceles is cytotoxic (destroys tissues), and can produce necrotic wounds in some bite victims. However, many other maladies can express similar symptoms. MRSA (Methicillin-resistant Staphylococcus aureus) is one of these. More to the point, spider bites in general are a rare phenomenon. They are simply overdiagnosed. You owe it to yourself to read this article by Dr. Richard Vetter, and insist that your physician rule out those other potential causes if you ever present what you believe is a “spider bite.”

Should you ever present with a suspected or confirmed spider bite, run, don’t walk, away from any physician who applies electric shock to “deactivate the enzymes in the venom.” This is not a practice endorsed by any respected body of doctors, yet I personally know one bite victim in a rural area who received such “treatment” back in the year 2000.

It is relatively easy to avoid the prospect of a spider bite by taking simple precautions, such as those outlined in this article from Spiders.us. Simply never put your hands in places you can’t see. Do be careful moving items that have been stored for lengthy periods without disturbance, especially clothes and linens, as spiders frequently hide in garments and blankets. One of the specimens depicted here was in the folds of a blanket that was taken out of storage in a home in Leavenworth, Kansas. 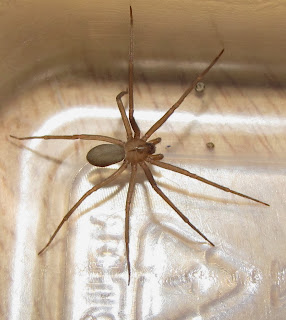 The Brown Recluse earns its name for its shy nature. They hide in narrow cracks and crevices, under stones or other objects, from which they spin a thin, haphazard, vaguely sheet-like web. Sometimes they wander out of their snares, especially at night. They are surprisingly tolerant of others of their kind, so large populations may occupy a small area. The family living in one home in Kansas City, Kansas collected 2,055 specimens in only six months. No one in the household was ever bitten, either. Individual recluse spiders in captivity live 2-3 years.

You should really not fear the Brown Recluse, but do give it respect. Exercise caution in places that you do not visit frequently, like the storage shed, cellar, deep recesses of the garage, and similar structures. Do not assume that every spider you see is a recluse. Male spiders of nearly all species, including those normally confined to webs, will wander in search of mates and may stray indoors in their quest for love. Should you really be concerned, take the specimen to an entomologist or arachnologist at a university, natural history museum, or even the public health department to have it properly identified. 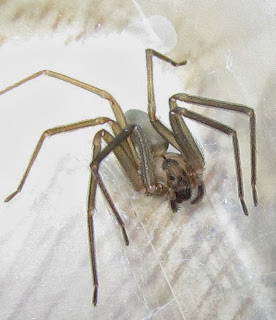