This installment of “Spider Sunday” features yet another arachnid that causes undo consternation and fear among homeowners who encounter it inside their residences. The Woodlouse Hunter, Dysdera crocata, North America’s only representative of the family Dysderidae, is not dangerously venomous to the average, healthy human being or family pet. 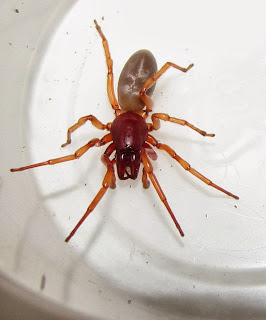 That is not to say that this species doesn’t look formidable. It ranges from 9-15 millimeters in body length, and has very large chelicerae (jaws) with long fangs. The cephalothorax and legs are bright reddish brown or orange, and the abdomen beige or gray in color. These spiders have only six eyes instead of the usual eight that most spiders have, and they are arranged in a compact semi-circle at the front of the cephalothorax. 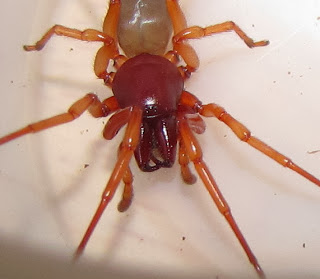 The Woodlouse Hunter is actually native to the western Europe, but has been introduced over much of the globe through commerce and other forms of human travel and enterprise. Here in North America it is most common in urban areas, favoring disturbed habitats in both forest and field.

Dysdera crocata is nocturnal, hiding by day under stones, logs, and boards or other debris. It ventures out at night in search of prey. The preferred prey is apparently terrestrial isopods known as woodlice, also called “sowbugs.” Sowbugs are also native to Europe, but now abundant in the U.S. and Canada. The spider uses its enlarged jaws and long fangs to pierce their armored prey, or turn it over and stab it in its soft underbelly. Captive Woodlouse Hunters will readily take other small animals as prey, so they are more plastic in their feeding habits than their name suggests. 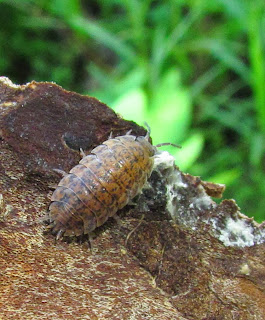 The life cycle, revealed by captive rearing, is lengthy. It takes about eighteen months for an individual spider to reach maturity after hatching from the egg. A given specimen can then live an additional two to three years. Mating probably take place in the spring. Females contain a batch of up to seventy (70) ova within a rudimentary egg sac consisting of only a few strands of silk.

Look for the Woodlouse Hunter under objects outdoors. They may be hiding inside an oval, silken retreat, which they spin for purposes of molting and overwintering. Sometimes, the spiders stray indoors, and that is where they are most conspicuous. While there have been documented bites by this species, the symptoms amount to only localized pain lasting an hour or so, due mostly to the mechanical injury caused by those long fangs. 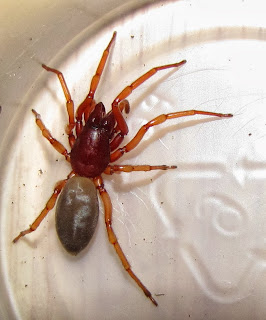 Dysdera is easily confused with Broad-faced Sac Spiders I the genus Trachelas, which have a nearly identical color pattern. Note that Trachelas has eight eyes, arranged in two rows across the wide front of the cephalothorax. Trachelas also lacks the long jaws and fangs of the Woodlouse Hunter. 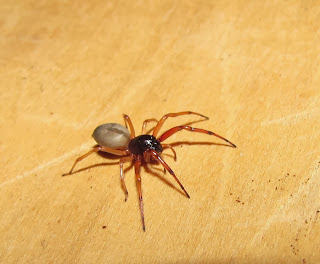 I am keeping the specimen of Dysdera imaged here as a potential display animal I can take to public educational events. The more that can be done to alleviate our collective fear and loathing of spiders the better, and the Woodlouse Hunter can be a great ambassador for that mission.