Mowing the lawn one August day, Jim noticed saucer-sized piles of soil in the bare patches, with a large hole on the edge of each one. He figured it was the work of rodents until he saw an enormous wasp enter one of the holes dragging another large insect behind it. Jim decided to avoid that part of the yard. 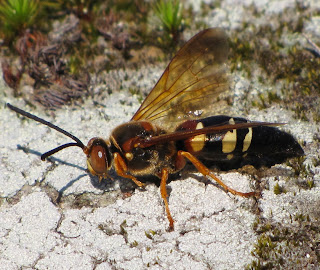 This scenario, and others like it, plays out over much of the eastern United States during the summer, creating mystery, annoyance, or downright hysteria for those finding that the Eastern Cicada Killer, Sphecius speciosus, has taken up residence on their property.
A Community of Killers
Cicada killers are solitary. This means that each female wasp excavates her own nest. Many wasps may burrow in the same area, creating the impression that they are giant, social yellowjackets or hornets. Male cicada killers, while incapable of stinging, will drive off other males, other insects, even birds as they seek mating opportunities with females. They sit on the ground, or foliage, rocks, or other objects that give them a somewhat elevated perch from which to survey their territory. Watch them cock their heads alertly at the passing of other wasps.
The female digs her burrow before she starts hunting. The tunnel extends up to three feet, at a depth of two feet. Individual cells branch off near the end of this shaft. Each “room” will host one of her offspring. 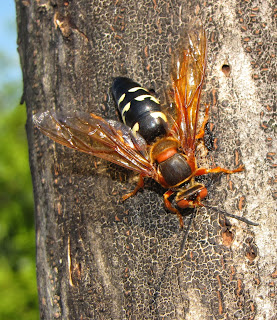 The Eastern Cicada Killer hunts mostly “annual” or “dog-day” cicadas in the genus Tibicen. These large, loud insects are heard in the tops of deciduous trees during July and August. The female wasp flies into the canopy and combs each branch until she bumps into a cicada. She grabs the insect and stings it into paralysis. A “shrieking” cicada is likely being attacked by a cicada killer.
The Cicada Killer Life Cycle
Cicada killers are strong. A wasp may fly directly from the scene of the crime back to her burrow, carrying her prey beneath her. Sometimes the journey is accomplished in stages, gliding from the tree to the ground, up another vertical object to launch another short flight, and so on until she gets home. She has to hurry: birds often harass cicada killers into dropping their prey.
She dives down the entrance to her burrow, hauling her prize to one of the underground cells. One cicada is enough to grow a future male cicada killer, but a baby (larval) female cicada killer needs to eat at least two cicadas, sometimes three. The mother wasp lays a single egg on the last cicada put into a cell. When all cells are filled, she fills the nest entrance and leaves permanently. 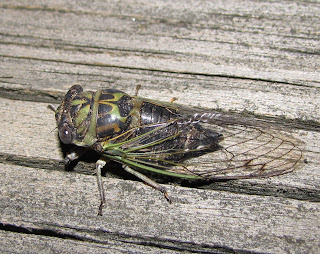 Typical cicada used as prey
The cicadas are paralyzed, not dead, which prevents them from spoiling until the wasp larva finishes consuming them. The egg hatches in a day or two, and the larva starts feeding. It matures quickly, in an average of ten days. The larva then spins a silken cocoon, incorporating soil particles into the capsule. Inside that covering it turns into a pupa, the externally inactive stage of metamorphosis. Pupae overwinter within their respective cells, the adult wasps chewing their way out the following summer and beginning the cycle anew.
Fueling up
Both male and female cicada killer wasps feed on substances rich in sugars and carbohydrates to fuel their energetic activities. Look for them on flowers where they sip nectar. Also look for them eating oozing, fermenting sap on the trunks of trees. Some of the images shown here depict this behavior. I even gently nudged one of the big female wasps into a better position while I was taking pictures. 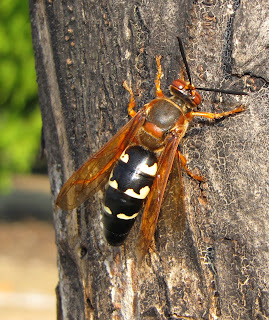 Cicada killers are probably the largest, bulkiest wasps you are likely to see east of the Rocky Mountains from Massachusetts and southern Ontario to Florida and Texas. The adult wasps range from 30-40 millimeters in body length, though some females can be up to 50 millimeters (just shy of two inches). No wonder they can seem so intimidating.
Nothing to Fear
Solitary wasps will not sting unless physically molested, or you step on one in bare feet. Male wasps may behave aggressively, but they lack a stinger. 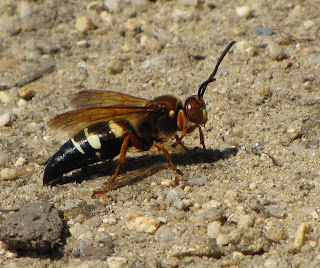 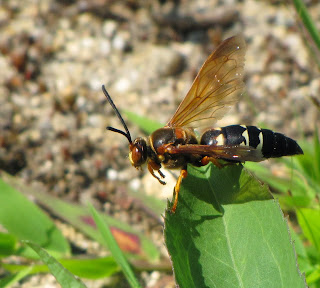