Last year, on June 15, 2013, my wife Heidi captured an interesting beetle at the Cheyenne Mountain Zoo where she works as a keeper for gorillas, orangutans, and other primates. What transpired after she posted images on Bugguide.net was surprising and exciting. It turned out that the beetle was a flower scarab, Euphoria fulgida, which had not been recorded in Colorado since 1902. 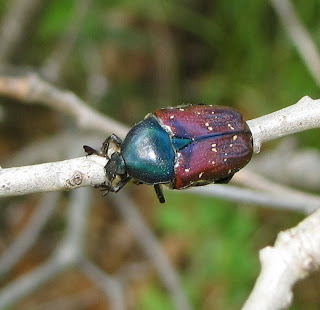 I was delighted that she even recognized it as a beetle, because she saw it in flight and this species is a remarkable bee mimic. Scarabs in the subfamily Cetoniinae, collectively known as fruit and flower chafers, have a special “hinge” on the body that allows the membranous hind wings to deploy for flight while the wing covers (elytra) remain closed. The insects are fast, powerful, and erratic fliers, so I am also surprised Heidi managed to catch the beetle. 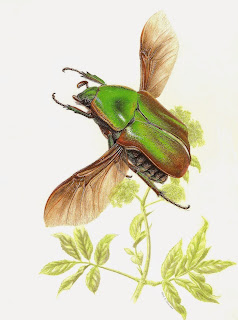 Since I was out of town when all of this happened, and without ready internet access, I couldn’t help her identify the specimen. So, she posted her images to Bugguide.net. By June 17, she had a preliminary identification, and then Dr. Frank Krell, a scarab expert conveniently located at the Denver Museum of Nature and Science, confirmed it on June 18.

Complicating matters is the great degree of variation in color for Euphoria fulgida, sometimes called the Emerald Euphoria. Many specimens from the eastern U.S. are indeed metallic green, with some reddish color around the edges. Margarethe Brummermann and I found specimens in the mountains of southeast Arizona that are metallic blue-black (Note: these are now recognized as a separate species, E. monticola). The ones here in Colorado mostly have a bright metallic blue-green pronotum (top of thorax), and mostly burgundy elytra with white speckling.

Euphoria fulgida is a fair-sized scarab, adults measuring 13.4-19.8 millimeters. This is a widespread species found from Ontario and Quebec to Florida, west to Nebraska, Colorado, and New Mexico. Look for the beetles flying during the day, usually close to the ground. They enjoy feeding on sap exuding from wounds on trees, especially oak. Occasionally they visit the flowers of dogwood, sumac, thistle, and other plants for nectar and pollen. The adults are most common in May and June, but can persist well into July. 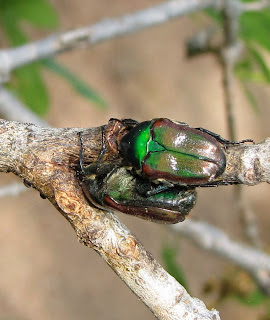 The life cycle of this flower chafer takes about a year. Larvae reared under laboratory conditions and fed on manure and ungerminated wheat seeds took an average of 122 days to mature. The larvae enter a quiescent pre-pupal stage in September or October, and pass the winter this way. Pupation takes place in the spring, often under logs in moist habitats, with the adult beetles emerging mostly in late spring and early summer. 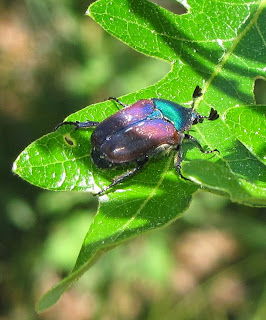 Fast forward to this week. Monday, June 2, Heidi and I went hiking in Cheyenne Mountain State Park, just south of Colorado Springs. Above the floor of the plains, the habitat changes to mixed evergreen forests with an understory of Gambel’s Oak and other shrubs. By late morning and early afternoon we were encountering a fair number of Euphoria fulgida weaving their way through the understory shrubs. We were also lucky enough to notice a trio eating sap from an oak twig. Altogether we saw probably close to a dozen specimens. Nowhere does this species appear to be abundant, but where you see one there are usually others in close proximity. 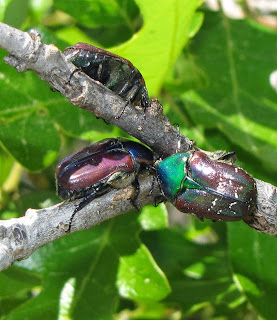 This is one of my favorite beetles, I must admit. I first encountered them on Marathon Key in Florida in June, 1978, and at first thought they were bees. (Note: Those Florida specimens are now recognized as a separate species, E. limbalis, per a revision of the genus by Jesus Orozco in 2012). I hope you have the pleasure of finding them in your own explorations.